While Moyo mulls an appeal, a spokesperson for the financial services giant says the ruling confirms it acted properly in terminating his contract. 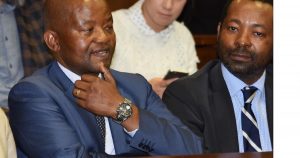 Old Mutual has won its appeal against an earlier order reinstating its former CEO Peter Moyo.

The ruling was handed down by the Johannesburg High court on Tuesday morning.

Moyo was suspended by the financial serves giant in May and axed in June, with Old Mutual citing a breakdown in trust and a conflict of interest related to NMT Capital, a boutique investment firm he co-founded. Moyo then took Old Mutual to court, with Judge Brian Mashile ruling in July that he be reinstated. Mashile argued that Moyo was supposed to be afforded a hearing or arbitration since the insurer had publicly accused him of conflict of interest and gross misconduct.

The appeal of a Mashile’s ruling was heard in December by a full bench of three judges, after Old Mutual successfully applied for Mashile’s recusal.

During arguments in December, Moyo’s legal team described the case  as an “unwinnable” battle, saying there was no need for Mashile’s July ruling to be overturned. Lawyers for Old Mutual, meanwhile, argued in court in December that Moyo was afforded a hearing before his contract was terminated in June 2019, following a suspension in May over an alleged conflict of interest involving NMT Capital.

Appeal may be in the works

Speaking to journalists after the verdict, Moyo indicated that there is a “good  indication” that he will appeal the ruling. A decision would be made soon, he said.