AT LEAST five goats were swept away and an unknown number of hectares of crops were destroyed after three dams near Pickstone Mine in Chegutu burst their walls on Wednesday.

The dams, Farnam, Masterpice and Maradhadi provide drinking water to more than 200 households in Chegutu district’s Wards 24 and 25.

The dams also support farming activities to A1 and A2 farmers from Blackhill, Laforty, Farnam among other farms and villages. 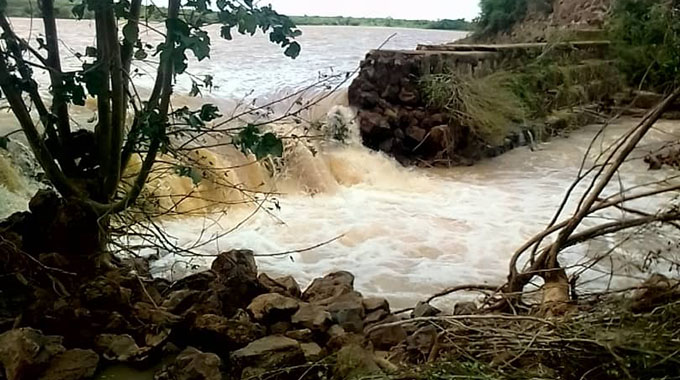 Masterpiece Dam after it burst its walls

The Zimbabwe National Water Authority (ZINWA)’s corporate communications and marketing manager, Mrs Marjorie Munyonga could not be reached for comment.

“The dams are used to support irrigation purposes, for livestock, human consumption and mining activities.

“At least 200 households and a number of small scale miners have so far been affected.

“We are hearing reports that the bursts have also resulted in the destruction of crops and death of livestock,” he said.

One Farnam villager, Mr Reason Chigogo said at least five goats from his village were swept away.

“Most farmers who have their fields close to the dams lost their crops when the dams burst their walls and for now, it is still early to give the number of hectares affected and that of animals killed although five goats from Farnam were swept away,” Mr Chigogo said.

Mr Machingura said while efforts were being put in place to address the challenge, the council had also acquired a transformer to help draw water from Mupfure River to Clifford Dam which also burst its walls recently.

The dam is used to support some suburbs under the council.