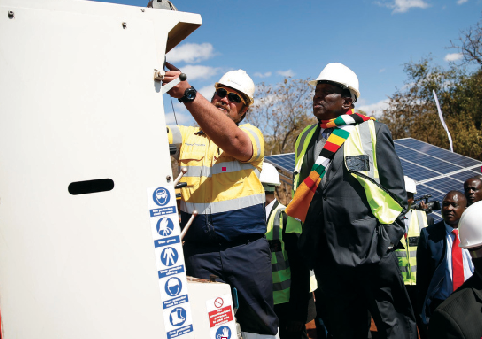 CLAIMS that a dodgy investment firm, Karo Resources Limited, will invest a staggering US$4,2 billion to develop a platinum mining plant in Zimbabwe are mired in controversy after it emerged this week that the cost of the project was plucked from thin air by government authorities, it has emerged.

Karo has managed to mobilise only US$8 million from Tharisa Plc, a company in which the Pouroulis family holds a 42% stake, raising questions as to how the purported multi-billion-dollar deal was going to be financed.

This comes at a time when the politically well-connected Pouroulis family, which runs Karo Resources through its significant stake in Johannesburg Stock Exchange and London-listed Tharisa Plc, was recently allocated vast platinum claims stretching over 23 903 hectares previously held by Zimplats along the resource-rich Great Dyke.

The Pouroulis family, which is close to President Emmerson Mnangagwa and is notorious for speculation in business, has been making power play moves in Zimbabwe after acquiring significant shareholding in Karo Mining Holdings, in a related inter-party transaction, ahead of the expected investment in chrome exploitation, platinum mining and refining as well as coal exploitation and power generation.

Tharisa Plc senior partner Bobby Morse told the Zimbabwe Independent on the sidelines of the platinum project groundbreaking ceremony held this week in Darwendale that the JSE and London-listed firm was still going through the preliminary stages of the deal and could not yet precisely determine the specific amount of financial resources required to implement the project. This has raised questions over who is behind the figure of US$4,2 billion.

Mnangagwa presided over the groundbreaking event.

“That US$4,2 billion is something that the government mentioned, not Tharisa, not Karo; it is a government number, we do not have a number, but it is going to be a few billion, we are at a very early stage,” Morse said.

“We have started the drilling, we have drilled one hole, there are many more holes to come, so thereafter once we have actually proven that we have the resource and in the meantime there is also other work streams going on, on how best to build this operation.”

Morse said the Pouroulis-run firms would leverage on the unproven platinum claims to mobilise resources required to rollout the controversial multi-billion-dollar project, which government has touted as one of the biggest investment deals Zimbabwe has ever clinched since independence

“Money will need to be raised. As you know, this is a sizeable project and the money will be raised outside Zimbabwe. Tharisa is a listed company; it is listed in Johannesburg and in London. And the funding obviously is going to be raised through the international capital markets. Tharisa is owned 42% by the Pouroulis family and the rest of the shareholders are a combination of different investors. So the Pouroulis family has a minority stake in Tharisa,” Morse said.

“Karo is wholly owned by the Pouroulis family, up until back in March when a 26% stake was taken up by Tharisa. So the listed company has taken a 26% stake in Karo here and whether that is going to increase will depend on the funding. Yes, it is an inter-party-related deal so in terms of bringing in Tharisa into the Karo shareholdings, Tharisa has taken up 26% of Karo.”

Karo, also owned by the Pouroulis family, signed the controversial multi-billion-dollar investment deal with government in April. In addition, Tharisa last month acquired three vast special grants to mine chrome and other natural resources along the mineral-rich Great Dyke, effectively giving the family control of vast swathes of some of the most lucrative mineral concessions in Zimbabwe.

The involvement of the listed Tharisa in the unlisted Karo Holdings allows the family to raise funds for its Zimbabwean projects on the stock exchange.

The company acquired the stake at a low cost of US$4,5 million from the Leto Settlement, “a related party being an indirect material shareholder in Tharisa” and “has a right to increase its project ownership by way of further project level investments at discounted values through a farm-in option at various economic milestones”.

Karo Holdings is seeking to mine platinum through Karo Platinum on land acquired from Zimplats, as well as refining platinum through a company called Karo Refining. Karo Platinum is an indirect 50%-held subsidiary of Karo Holdings with the remaining 50% to be held by an investment company wholly owned by the government. It will also exploit coal through Karo Coal and generate power through a company called Karo Power.

“In terms of the special grant, Karo Platinum will be entitled to mine PGMs (platinum group metals) situated within the License Area. Karo Platinum will be responsible for the mine development and mining operations which will deliver run-of-mine ore to Karo Refining (Pvt) Limited, (‘Karo Refining’). Karo Refining, 75% owned by Karo Holdings, will build, own and operate the concentrators, smelters, as well as the base metal and PGM refinery,” the company announced last week.

“The original agreement contemplated the construction of a coal-fired power station, however, in consultation with the Ministry of Energy and taking into consideration the power mix requirements of Zimbabwe, the agreement was amended to include the phased development of a renewable energy source of 300MW of solar power, to be fed into the national grid. Technical and financial partners have been identified for this project.”

Tharisa announced that Karo Holdings would seek to increase its interest in Karo Platinum should an opportunity arise.

“It is intended that the Project Companies will apply for National Project Status and for the projects to be contained within a Special Economic Zone, which will provide the projects with enhanced economics through concessions granted by the Zimbabwe government,” the company said.

Sources privy to the murky deal say the platinum claims which Zimplats was forced to cede to Karo Resources were yet to be explored, casting doubt on whether Karo had capacity to mobilise the investment capital required to first prove the exact quantities held by the claims and secondly to extract the commodity.

“Basically, Karo Resources took over claims stretching from portal 12 to portal 19 previously held by Zimplats. Undertaking exploration in that area would require an enormous amount of money because the resource is deep-lying and only starts occurring after drilling deeper.

“It will be difficult for Karo to raise money to establish the plant without first undertaking exploration which is equally expensive. Holding onto these unexplored claims for speculative purposes might be the motive, but it will be difficult,” a source said.