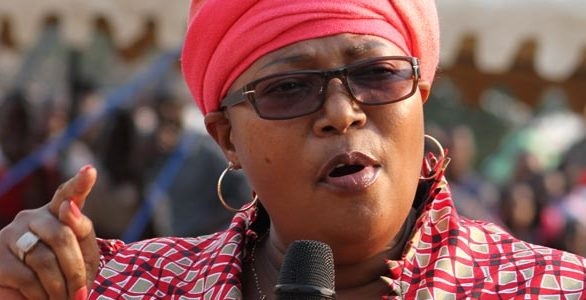 HARARE – The MDC-T led by Thokozani Khupe will hold its 19th anniversary
celebrations at a date to be confirmed.

This is seen setting the stage for a counter-attraction given that the
Nelson Chamisa-led MDC is also planning to conduct its own 19th
anniversary celebrations this weekend.

“We have not yet come up with a definite date simply because we have to
sort out the logistical issues first. However, the good news is that we
will very soon be holding a befitting ceremony to commemorate the 19th
anniversary of the MDC. We are busy re-booting and re-energising our party
and we are certainly not looking back,” said MDC-T vice president Obert
Gutu.

The original MDC, which both parties claim to represent, was formed in
1999.

Upon the death of its founding father Morgan Tsvangirai in February this
year, Chamisa and Khupe took different political paths.

Since then they have been fighting over who the bona fide leader of the
party is.

HARARE – The Thokozani Khupe-led MDC-T is urging the new Cabinet ministers
to shun corruption in a bid to reconstruct Zimbabwe’s battered economy.

In a statement, the party said its greatest concern was whether the new
administration would comply with the Constitution as the supreme law of
this land and for the newly-sworn in ministers to be transparent,
accountable, responsive and diligent as they execute their duties.

According to the MDC-T, Zimbabweans need to be inspired by new leadership,
which must demonstrate commitment and dedication to transforming the
country and not just to line their pockets “as we have seen in the
previous years”.

It said the new ministers must engage with all stakeholders as they carry
out their mandate to ensure that they uproot corruption in their relevant
ministries and professionally manage their portfolios with a
people-centred and transformative approach.

“A government that means business should have a strict policy stance on
corruption as it is the root cause of the quagmire we are facing as a
nation,” reads part of the statement issued by the MDC-T’s national
secretary for information and publicity Linda Masarira.

“As a party we implore the president of this country to ensure that the
State, institutions and all agencies of government have a zero tolerance
stance on corruption and the buck stops with him”.
The MDC-T added that the new Cabinet ministers should be accountable and
provide good service delivery.

“We hope that policy inconsistency will be a thing of the past and that
the new government will be premised on the overall government policy
thrust and political will to see certain things done…,” it said.