LATEST: Zimbabweans hurt in protests stream in for care

Zimbabweans injured during a government crackdown on pretests over a dramatic fuel price increase are streaming into a hospital in the capital Harare. 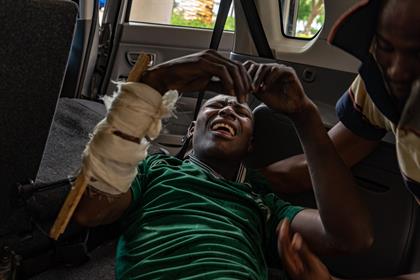 A man is loaded into a car after allegedly being assaulted by soldiers. (AFP)

Zimbabweans injured during a government crackdown on protests over a dramatic fuel price increase are streaming into a hospital in the capital, Harare.

People have broken legs and other injuries. A nurse attends to a man with a broken spine.

Albert Taurai tells The Associated Press he had ventured out to look for bread when plainclothes officers wearing masks beat him up.

Keith Frymore has a torn lip. The security guard tells the AP a group of uniformed soldiers attacked him at work.

Alarm is growing over the crackdown this week on a nationwide stay-at-home protest movement.

MISA-Zimbabwe shares a text message from the country’s largest telecom company, Econet, calling the government order “beyond our reasonable control.” The shutdown faces a court challenge from MISA-Zimbabwe and Zimbabwe Lawyers for Human Rights.

A prominent pastor and activist who faces a possible 20 years in prison on a subversion charge is set to appear in court again on Friday. Evan Mawarire calls it “heartbreaking” to see the new government of President Emmerson Mnangagwa acting like that of former leader Robert Mugabe.

International calls for restraint are growing, while Mnangagwa prepares to plead for more investment at the World Economic Forum in Davos, Switzerland.