Econet Wireless has lamented that their lawyers say they are required to comply with the directive pending the courts’ decision on its legality. 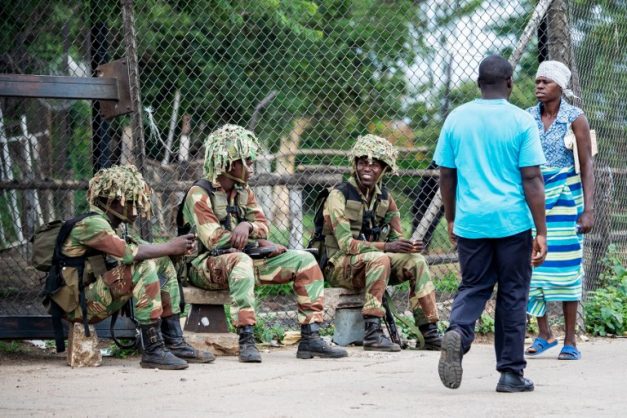 Zimbabwean soldiers mount positions at entry points into the city of Bulawayo on January 17, 2019 as order is slowly restoring. – Nationwide demonstrations erupted on January 14 following a crippling strike over the increase in the price of fuel announced by Zimbabwean President to tackle a shortfall caused by increased demand and “rampant” illegal trading. (Photo by ZINYANGE AUNTONY / AFP)

Econet Wireless has lamented that their lawyers say they are required to comply with the directive pending the courts’ decision on its legality.

“At 10:05pm [on] 17 January 2019, we were served with another directive for total shutdown of the internet until further notice,” the company said.

“Our lawyers advised we are required to comply with the directive pending the courts’ decision on its legality. The earlier directives are already the subject of a pending high court application. We sincerely apologise for all inconvenience caused by the acts of government which are beyond our reasonable control.”

Rights groups on Friday criticised the government of Zimbabwe for the move.

More than 600 protesters have been arrested in Zimbabwe, with state security agents unleashing what critics have called a violent crackdown on citizens who participated in protests triggered by a call from labour federation ZCTU for a three-day shutdown over the 150% fuel price increase. The hike has already driven transport costs sharply higher.

On Thursday, the US Embassy in Harare expressed concern over violence in parts of the country, urging all parties to exercise restraint.

“We condemn any disproportionate use of force and call on Zimbabwe’s security forces to respond to civil unrest professionally and with respect for human life and constitutional rights. We are also alarmed by credible reports that security forces are targeting and beating political activists and labour leaders,” it said in a statement.

“The United States strongly supports freedom of expression, freedom of association, and peaceful assembly. People have the constitutional right to protest and express their views peacefully. We condemn acts of arson and looting and threats against citizens. We call on protesters to refrain from violence and threats of violence, which will only cause further economic hardship.”

The US mission also called on Harare to respect its constitutional and international legal obligations regarding the right to freedom of expression.

“We are concerned by the Zimbabwean government’s blocking of internet services in the country … and urge the restoration of access to social media sites and application,” it said.