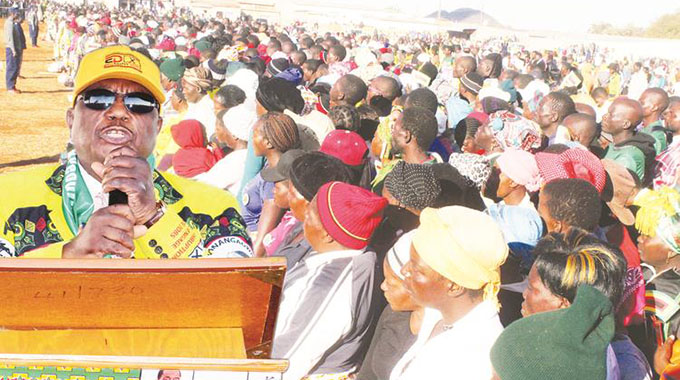 Some of the Zanu-PF party supporters who thronged Filabusi Business Centre for a rally addressed by Vice President Constantino Chiwenga (INSET) yesterday.

VICE President Constantino Chiwenga has hit out at MDC-Alliance leader Mr Nelson Chamisa for tarnishing the reputation of the Zimbabwe Electoral Commission (ZEC) by making unsubstantiated claims of impropriety against its members when he was an integral part of their selection into the electoral management body.

VP Chiwenga said laws are not promulgated on the streets and anyone with issues with any piece of legislation should use Parliament as it is the forum through which legislation is promulgated.

He said this while addressing a zanu-pf rally at Dingumuzi Stadium in Plumtree yesterday.

He was referring to a demonstration by the MDC-Alliance in Harare on Wednesday to force ZEC to implement so-called electoral demands. 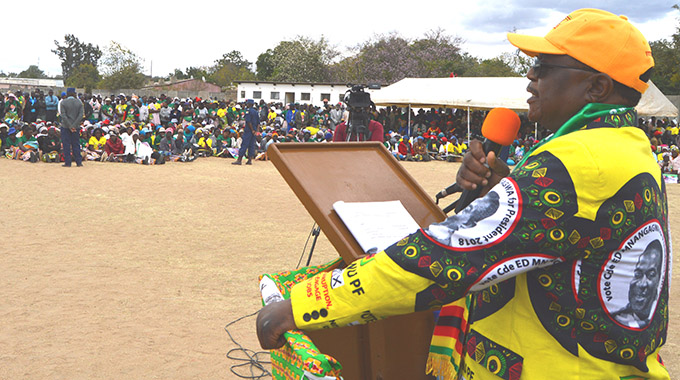 “Some are afraid of going to elections and now want to implement things they should have done while in Parliament. There is no law that is made on the streets; laws are made in Parliament,” VP Chiwenga said.

He said elections would not be stopped by demonstrations.

“If people have issues with any piece of legislation they do not like, they should ask the people to vote for them so that they can change the laws to suit their needs.

“Those who are attacking ZEC were part of the committee responsible for selection of ZEC members. They should know that when proclamation has been done there is no way elections can be stopped. They should wait for the next election,” the VP said.

He urged zanu-pf members to continue their peaceful campaigns ahead of the July 30 elections. 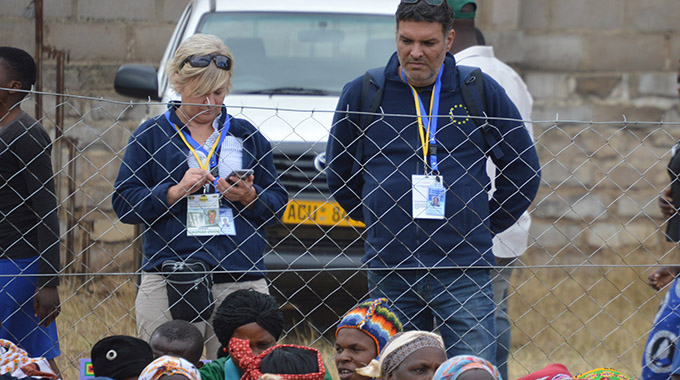 “You might have heard of the demonstrations in the streets (of Harare), but that will not work.

“The days of throwing mud against each other are long gone. As Zimbabweans we should not do that because this game of politics is for mature people and not kids. So let’s go and vote in a peaceful way and bring results that will build Zimbabwe; a Zimbabwe that will be appreciated by our descendants,” VP Chiwenga said.

Government, he said, was working on devolution which would see provinces benefitting from the wealth within them and also contributing to central Government.

He said in the new dispensation, provincial Ministers would no longer be responsible for politics and sloganeering but would be ministers for economic development. 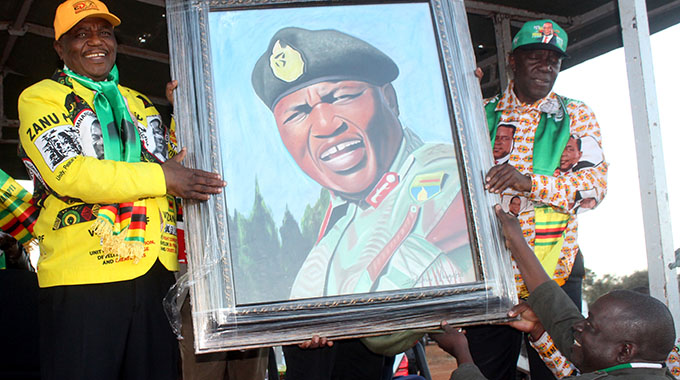 Vice President Chiwenga receives a present from Umzingwane constituency member of parliament Cde William Dhewa after his address during a rally in Filabusi, Insiza district yesterday.

“I think you heard the issue of devolution; it was a contentious issue during the constitution making process but ours is not about creating a separate state. Zimbabwe is a unitary state. It will remain united because from here in Plumtree to Mutare, from Victoria Falls to Chipinge, we are one people. We may differ on customs, cultures and languages,” the VP said.

“The devolution that we are talking about is meant to give powers to provinces, powers to lower tiers of Government because for one to know what is required in Dombodema, what is needed in Mpoengs or Mangwe, that person can only be in Plumtree.”

VP Chiwenga outlined the economic plans for Plumtree and said the town must be upgraded to Municipality status. 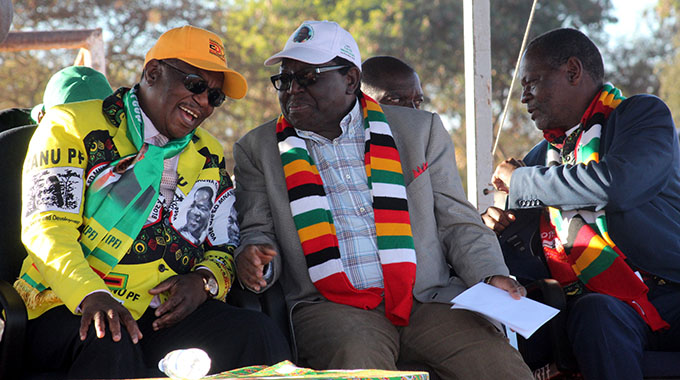 “Here in Mat South, you have coal, diamonds and livestock rearing. Here in Plumtree we are going to have an inland port and the wealth from this province will develop this area. Plumtree was a town but you have qualified to be a Municipality because the town has grown through economic development found around here,” said the VP.

He said areas around Plumtree face perennial water shortages as well as schools, clinics and bad roads and Government was working on addressing those issues.

“There are many clinics that have to be constructed in Bulilima and Mangwe. But our top priority is the District Hospital in Mangwe. A maternity wing has to be set up at Dingumuzi clinic to cater for women as Government has scrapped maternity fees to ensure that all women go to a health centre for antenatal care,” said the VP.

VP Chiwenga said Government would work on equipping Plumtree District Hospital and provide drugs so that those that are referred to it get the satisfactory service.

He said the issue of staff accommodation should also be prioritised and said a school of nursing should be set up at Brunapeg to also recruit locals.

VP Chiwenga said they were also prioritizing the construction of roads and on top of the list are the Plumtree – Tshitsi-Mpoengs, Dombodema-Maitengwe and the Plumtree-Tsholotsho.

“We are looking at the roads. They are in a bad state. Some need to be gravelled, some patching and some to be tarred,” he said.

The VP said more dams would be constructed countrywide and in Plumtree district namely Tematema and Nanda dams.

VP Chiwenga said people would also benefit from the Command livestock programme which he launched in February.

He urged party supporters to vote for Zanu-PF’s presidential candidate Cde Emmerson Mnangagwa whom he described as a hardworking man with a vision for a new Zimbabwe.

Meanwhile, villagers from Silalatshani under Chief Sibasa in Insiza are free to continue farming without worrying about Zimbabwe National Water Authority debts which were carried over from the bearer’s cheque era, VP Chiwenga has said.

Addressing hundreds of people at Filabusi Centre during a rally yesterday, Cde Chiwenga said Zinwa also had no power over fisheries which are to be managed by villagers.

He said Government has scrapped off their debts and therefore no one should demand payments or cut off their water supplies.

“We heard that villagers are being forced to pay thousands of dollars as debts carried over from that era. This should stop immediately and villagers should go and farm freely knowing that they do not owe Zinwa,” he said to applause.

“Zinwa should stop acting as if they own the fisheries project, it belongs to you all and you should benefit fully.”

VP Chiwenga said Government had been working tirelessly to foster development since November last year when citizens stood up for economic revival.

“We have party candidates here chief being President Emmerson Mnangagwa who has proven he has the people at heart. We have to unite as we did last year and vote him into power come July 30,” he said. Bulawayo Bureau, Herald Reporter