Thousands of marchers have gathered in the streets of the capital in attempt to force president to resign, four days after the army seized power

Marchers massed outside the home of President Robert Mugabe on Saturday as tens of thousands took to the streets of Harare calling for the veteran leader to step down.

The crowds gathered from early morning, revelling in their freedom to voice anger at decades of misrule as well as hope for a better future for Zimbabwe. Many waved the national flag, chanting and singing. Some embraced soldiers or posed with them for selfies.

The march had been sanctioned by the military, which took power on Tuesday night, confining Mugabe, 93, to his residence. 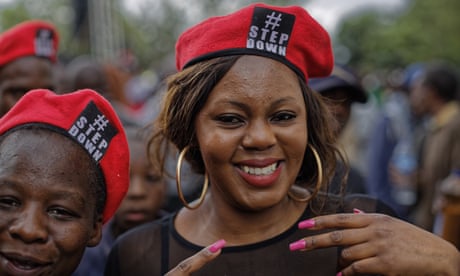 Protesters in Zimbabwe call for Mugabe to step down – in pictures

Euphoric crowds filled streets in the capital on Saturday morning and cars honked their horns.

There were similar scenes in the southern city of Bulawayo, as well as abroad, where diaspora Zimbabweans held their own rallies.

In the early afternoon, some headed towards the Zimbabwean president’s sprawling mansion in the wealthy neighbourhood of Borrowdale.

They were responding to a call from a leader of the powerful liberation war veterans.

“Let us now go and deliver the message that grandfather Mugabe and his typist-cum-wife should go home,” the war veterans association secretary general, Victor Matemadanda, told the marchers at a rally.

Despite mounting pressure, Mugabe has refused demands to leave office.

Relatives say the veteran autocrat and his wife Grace are “ready to die for what is correct” and had no intention of stepping down in order to legitimise this week’s military coup.

Speaking to Reuters from a secret location in South Africa, Patrick Zhuwao, Mugabe’s nephew, said on Saturday that his uncle had hardly slept since the military seized power, but his health was otherwise good.

The military and senior officials within the ruling Zanu-PF party now appear set on forcing Mugabe, the only ruler Zimbabwe has known since independence in 1980, to step down within 48 hours.

Few options are open to the veteran autocrat, who has ruled Zimbabwe through a mixture of coercion, bribery and revolutionary rhetoric for nearly four decades. Support in some branches of the security establishment – such as the police – has evaporated and many political supporters have been detained.

The march will demonstrate popular support for the takeover and a return to democracy. However, it is moves within Zanu-PF may prove the decisive factor in forcing Mugabe to step down.

All 10 of the country’s provincial Zanu-PF branches have passed motions of no confidence in the president. These could lead to Mugabe being stripped of office by Sunday, one official told the Guardian.

The state broadcaster ran a headline, “Zanu-PF call for Mugabe to step down”, which would have been unthinkable a week ago, underlining the pace of change in the small southern African state.

Earlier on Friday, Mugabe, who had been confined to his residence since the takeover, attended a university graduation ceremony on the outskirts of Harare.

Clad in academic gown and hat, he walked slowly in a procession on a red carpet to a podium as a marching band played. He was applauded as he announced the opening of the ceremony.

On Friday morning an army statement describing “significant progress” was broadcast on national television and published by state-run media. The statement appeared to have been aimed at quelling growing concerns that the military takeover could descend into chaos.

At a press conference on Friday, Chris Mutsvangwa, a leader of Zimbabwe’s war veterans, said the president would not be allowed to remain in power.

“We are giving a very stark warning to Mugabe, his wife and anyone who wants to be associated with him that the game is up, finished,” Mutsvangwa said, to applause from the audience of journalists.

The main opposition party, the Movement for Democratic Change, said the military takeover resonated “with the national public sentiments and [was] hence irreversible in effect and fact”.

Dumiso Dabengwa, a former home affairs minister and liberation war veteran, congratulated the military on “the initiative they took to block the rise” of Grace Mugabe, the president’s 52-year-old wife.

“Ninety-nine percent of people want Mugabe to go. He is no longer in charge … Grace is in charge and Zimbabweans cannot fold their arms and let a character of that nature to lead. She had to be stopped,” Dabengwa told reporters in Johannesburg, South Africa.

Since taking power, the military has arrested about a dozen senior officials and leading members of the G40, a faction of Zanu-PF who are loyal to the first lady.

Grace Mugabe has not been seen since the takeover. Sources told the Guardian she was in her husband’s Harare residence when he was detained on Tuesday.

The takeover is thought to have been prompted in part by fears among the military and its allies within the ruling party of an imminent purge of rivals of the president’s wife, which would allow her to exercise greater power.

The army has said the takeover was a temporary measure to target “criminals” around Mugabe, resolving a succession battle that has pitted Grace Mugabe against the former vice-president Emmerson Mnangagwa.

Mnangagwa was reported to have returned to Zimbabwe from South Africa, where he fled last week after being stripped of his office by the president as part of the apparent purge.

Opposition officials told the Guardian they believed there would eventually be a deal allowing Mnangagwa to be appointed president, leading a transitional government that would include senior opposition leaders in top posts.

Associates of the first lady detained during the takeover would be prosecuted in accordance with the law, the officials said.

There was no independent confirmation of the opposition claims, which one analyst described as optimistic, though negotiations are clearly taking place between multiple political actors.

Other possibilities are Mugabe staying on as president until a Zanu-PF conference scheduled for December, or even until elections due in mid-2018.

The massive popular anger towards the leader displayed at Saturday’s march makes that unlikely, however.

There is also frustration in Zimbabwe at the lack of explicit support for the military takeover from South Africa, the biggest regional power, the Southern African Development Community regional bloc and the African Union.

Ian Khama, the president of neighbouring Botswana, said on Friday that the military intervention was “an opportunity to put Zimbabwe on a path to peace and prosperity”.

He said: “I don’t think anyone should be president for that amount of time. We are presidents, we are not monarchs. It’s just common sense.”