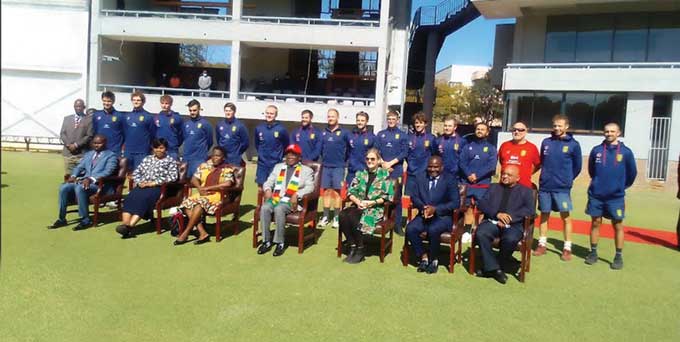 BY SILISIWE MABALEKA
PRESIDENT Emmerson Mnangagwa yesterday said he was thrilled by the International Cricket Council (ICC)’s choice of Zimbabwe to host the men’s T-20 World Cup qualifier kicking off in Bulawayo this morning.

The finals will be played in November this year in Australia.

Speaking at a function to welcome the seven nations joining the hosts in the qualifier, Mnangagwa said sports bring diversity and reinforce unity among people.

“The fact that eight teams are participating in the tournament which includes the Unied States of America, Uganda, Netherlands, Singapore, Jasse, Hong Kong, Papua New Guinea and Zimbabwe’s Chevrons, drawn from different continents, set out diversity and jamboree atmosphere in the sporting fraternity. Sports unite people from different sports grounds,” he said.

“As Zimbabwe we count it a privilege to be hosting a tournament of such magnitude and global significance right here in Bulawayo. We are greatly humbled that ICC has given us once again the opportunity to host such an event.”

Mnangagwa also noted that this is the fifth ICC tournament that the country has hosted within the past six years. He said the country got the chance to host the African regional women’s competition as well as the ICC World Cup qualifiers in 2018 and recently it also hosted the Women’s Cricket World Cup qualifier in 2021.

Appreciating the confidence that ICC has on Zimbabwe, Mnangagwa said: “On behalf of the continent I would like to commend the ICC for nominating Zimbabwe alongside South Africa and Namibia to host the International Cricket Council for 2027.

“The government is committed to providing an environment which allows various disciplines to grow to their full potential and in doing so we are determined to leave no one and no place behind in our communities. Presently my administration is formulating the sports and recreation policy which seeks to promote inclusive participation of previously marginalised communities in our country, which is aimed at remodelling our sports sector in an inclusive and viable industry.”

Zimbabwe Cricket chairperson Tavengwa Mukuhlani said they were privileged to host the qualifiers.

He said hosting of the ICC cricket qualifiers would help boost the economy given the huge number of tourists who have come for the qualifiers. He said they wish to host future events in Victoria Falls.