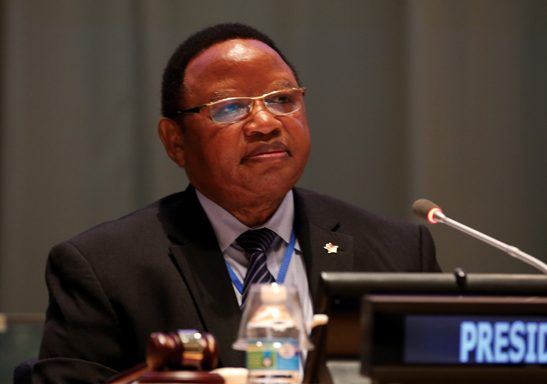 FOREIGN Affairs minister Frederick Shava has rallied the media to play a critical role in the country’s quest to improve its “battered image”.

In a first of its kind engagement between the Foreign Affairs ministry and editors from across the divide, Shava said the media was key in articulating any foreign policy.

Alpha Media Holdings editor-in-chief and NewsDay editor Wisdom Mdzungairi, The Standard editor Kholwani Nyathi, Zimbabwe Independent editor Faith Zaba were part of a cast of editors from the private and State-owned media who met the minister under the banner of Zimbabwe National Editors’ Forum (Zinef).

“I am hopeful that together, we will be able to correctly and rightly reposition our country within the broad community of nations,” Shava said.

Shava said his role was to advance the country’s foreign policy position outlined by President Emmerson Mnangagwa when he took power in November 2017.

“Another major role of the ministry is to improve the battered image of the country,” he said.

“Under my leadership, the ministry will play its part to see that Zimbabwe returns to its rightful place in the community of nations after years of isolation and confrontational diplomacy. We can boost the country’s attractiveness by telling the world our narrative through robust communication.”

“It is the lens through which Zimbabwe is viewed globally. Therefore, the ministry regards the media as a very important arm which wields tremendous power and influence that plays a pertinent nation-building function of enlightening and educating the public on current developments, programmes and policies,” Shava said.

“Rebranding our country’s battered image, consolidating old friendships and opening new economic frontiers of mutual beneficial co-operation will thus remain a critical foreign policy objective. I will place engagement with both public and private media at the heart of the ministry’s communications strategy and we will always endeavour to provide accurate and timely information.”

Zinef chairman Dumisani Muleya reaffirmed the media’s commitment to report issues about Zimbabwe factually, adding that under Zinef, gatekeepers from the State-owned and private media were speaking with one voice.

“As media, we will be as factual as possible and government should be open with journalists in the discharge of their duties,” Muleya said.

“We now have one platform under Zinef that united editors from across the board and we want to hold the Executive to account. We should work together. Only the corrupt must be very afraid because we hold no brief for anybody.”

Newer Post
Residents fume as ‘thieving’ council workers bounce back
Older Post
We know where we are going: ED