Letter from Africa: Zimbabwe’s ‘enemy of the people’ returns home 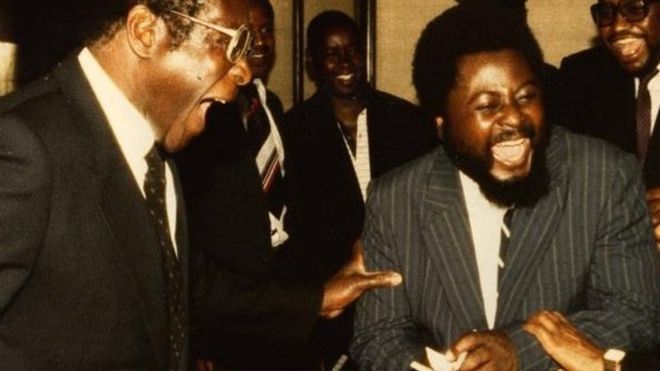 Journalist Wilf Mbanga reflects on his return home 15 years after going into exile fearing for his life.

In our series of letters from Africa, Zimbabwean journalist Wilf Mbanga reflects on his return home after 15 years in exile – and 10 months after long-time leader Robert Mugabe was ousted from office.

The last time I was at Harare airport I was leaving hastily in fear of my life having been arrested on a trumped up charge and locked up for a night in a filthy, overcrowded cell.

I had endured a six-month-long trial and was finally acquitted by one of the country’s few untainted magistrates.

Despite this, the harassment continued – I was constantly followed, on one occasion men in suits jumped over my garden wall to prowl around my house at night.

It was August 2003 when I left. I did not know when I would return – but I fully expected to be back within a year or so.

‘Mugabe was my friend’

There was a time when things worked in Zimbabwe, when the economy was booming, unemployment was not an issue, we had our own currency and the country was able to feed itself with some extras for the neighbours.

Robert Mugabe, who at the time was president and my friend, was regarded as a world statesman.

Everything started to sour as corruption, unbridled greed and economic mismanagement took hold.

It became a crime to criticise the head of state and I, even after I had left the country, was declared “an enemy of the people” for writing a critical column in a Dutch newspaper.

Fast-forward to September 2018, the queues in the arrivals hall at the renamed Robert Gabriel Mugabe International Airport were chaotic.

Nobody knew which queue was for returning residents, which for visitors and which for the elusive investors who were fulsomely welcomed on large shiny signs.

As a British passport holder I had been given a form to fill in on the plane.

As the British Airways jet cruised into a leisurely descent over Harare, I looked out of the window at the dry, dusty countryside and wondered what awaited me.

My mouth was as dry as the dusty veld outside. I was expecting government agents to pounce at any moment, as the state-owned Herald newspaper and the Zimbabwe Broadcasting Corporation had reported two warrants for my arrest during my absence.

But absolutely nothing happened. My little granddaughters waved a colourful banner from the balcony with squeals of delight.

I walked out into the September sunshine and the welcoming embrace of the remnants of my family.

I could not stop glancing back over my shoulder, anticipating that at any moment somebody would demand that I follow him to a small office somewhere for questioning and heaven knows what else.

My lawyers later assured me that my case was “political” and was not criminal – and the fact that President Emmerson Mnangagwa had given his nod to my return was enough guarantee that I would be safe.

The car park was full of luxury 4×4 vehicles.

On the drive home from the airport, the first part of the new dual carriageway had just been completed and was beautiful. But the houses that lined it were shabby and dilapidated.

The only bright colours to be seen were on the remaining Zanu-PF election campaign billboards and the beautiful spring flowering trees.

The suburb where I had lived used to have good roads, well-tended homes and verdant verges. Now there were only shrivelled shrubs, bare earth, and countless potholes.

Rickety tables stood at most street corners pathetically stocked with a meagre assortment of wares – a few tomatoes, sweets wrapped in scraps of newspaper, pop corn and pork rinds. This was never before seen in the suburbs.

The houses stand behind huge walls – an ugly testimony to the high rate of petty crime by hungry, impoverished citizens.

“A welcome development was the noticeable absence of fear among the people I spoke to. The last time I was in Zimbabwe, people were reluctant to discuss politics with strangers”

Everything looked dingy, tired, old – in desperate need of a lick of paint.

Elevated water tanks are now a common feature at most houses as the residents rely on borehole water delivered by lorry rather than the contaminated municipal offering – if that is available at all.

The delivery trucks have destroyed the suburban roads.

A drive into the city centre tests one’s patience and driving skills.

Overloaded, rickety minibuses overtake on both left and right at high speed and can stop abruptly in front of you without warning.

In some cases, the conductor hangs precariously out of the back door.

Drivers of the luxury SUVs seem to think they are above the law and don’t need to stop at street lights or give-way signs.

This irritated me beyond measure as in my day most drivers kept to the speed limit and obeyed the rules of the road.

A welcome development was the noticeable absence of fear among the people I spoke to.

The last time I was in Zimbabwe, people were reluctant to discuss politics with strangers and those that did spoke in hushed tones and looked over their shoulders for the secret police, real or imagined.

‘Tonic to my soul’

Despite the obvious hardships experienced in daily life here, such as having to queue for long hours to draw cash from banks, living without clean water, lack of services like regular rubbish collection and reliable electricity, it is still wonderful to be back home.

Some of my relatives, including my mother, have died while I was in exile. So have many of my old friends.

Cousins who had young children when I left now have grandchildren. Everybody I knew looks older.

The countryside is outstanding as it has always been.

The zebrawood trees, known locally as “msasas”, on the road to the eastern highlands have always meant a lot to me. To see them in their full glory at this time of the year, when their new buds turn red, is something to behold.

The majestic mountains and the deep valleys evoke indescribable emotions for me.

And above all, to be home with my family and friends listening to the familiar sounds and smelling Zimbabwean air, albeit briefly, has been a tonic to my soul. I will be back!