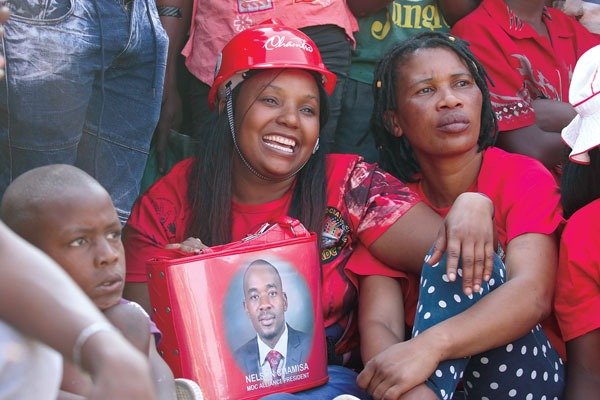 THE MDC Alliance is heading for a clash with councillors in Masvingo and Victoria Falls, who defied party directives on the selection of mayors, with the opposition party ordering one of the elected city fathers to step down or face suspension.

Newly-appointed Masvingo mayor, Collen Maboke was voted in against party orders after being nominated and seconded by Zanu PF councillors.

This prompted protests from MDC Alliance supporters who were gathered outside and threatened to beat some of the city fathers for “selling out”.

In Victoria Falls, residents and councillors protested against what they termed imposition of Margaret Varley as mayoral candidate and, instead, voted in Somvelo Dlamini.

The new mayor vowed to defy the MDC Alliance directive to step down after the controversial elections that also saw some of the party’s seven councillors voting for a Zanu PF councillor, Wellington Mahwende, as deputy mayor.

The MDC Alliance had nominated Selina Maridza as the deputy, causing ructions in the party.

The opposition party last week summoned all the Masvingo councillors to a crisis meeting in Harare and accused them of forging an unholy alliance with Zanu PF.

According to provincial chair James Gumbi, the party ordered Maboke to step down for alleged disobedience and accused the councillors of failing to show unity and capitalise on their numerical advantage to get both posts.

“The party resolved that proper party procedures were not followed in the selection of the mayor. It was resolved that Maboke steps down,” he said.

Insiders said after the meeting, the opposition party resolved that ward 5 councillor, Daniel Mberikunashe, should take over from Maboke.

But in an interview yesterday, Maboke said he was not going to relinquish the post.

“Yes, I was told to step down, but I am yet to see the official communication,” he said.

The defiance may lead to a possible by-election if the MDC Alliance decides to recall him.

In Victoria Falls, the MDC Alliance yesterday summoned mayor Dhlamini to the party’s Hwange offices over allegations of defying a party directive.

Dhlamini confirmed the orders, saying that alliance leader Nelson Chamisa had called him asking about the Friday incident.

Sources in the party said Dhlamini was facing suspension or expulsion from the party.

“We were summoned to go to Hwange to explain how things changed on Friday and as I was there, the president called me inquiring what had transpired on election day and I suggested that I write a report and submit to his office tomorrow (today) where I’ll also explain myself to him,” Dhlamini said.

However, provincial party secretary-general, Mxolisi Ndlovu, who attended the Hwange meeting, had no kind words for Victoria Falls councillors and Dhlamini.

“We convened a meeting with them at our Hwange offices because we wanted to know what transpired since the day of swearing-in, we were not there. We only attended the first one and on the second, we suddenly heard that they had been called in for another swearing-in ceremony. So we wanted them to tell us their story so that, in turn, we inform the national executive, but I cannot pre-empt anything before the president (Chamisa) receives the report,” Ndlovu said.

“We summoned them as councillors because it was collective defiance what they did. We have our own guidelines and if you go against them, honestly no one accepts that. In our organisation, we stand by our rules and the rule was to have Varley as a mayor and him as a deputy.”

Residents protested against Varley’s imposition, leading to the postponement of the elections.

They accused the party of imposing candidates and sending director for mobilisation, Farai Chinobva, who was openly giving councillors orders during nomination.

Ndlovu said residents should not meddle in party politics.

“We are the custodians of the Victoria Falls Municipality, but we believe there were outside forces who were at play in our affairs and we wonder why those people are so interested in our affairs. Yesterday, I was in Umguza, Zanu PF do their things well and whip their councillors into line and everything went smoothly because they followed orders given by the party,” he said.

“We might hate Zanu PF, but they are a principled party in terms of whipping people to toe the party line. They choose their chairperson from the caucus of the party up to the end, but when it comes to us, when we do our internal things, it becomes an outcry.”

Meanwhile, at least one Zanu PF councillor voted with opposition for the post of chairperson and his deputy at Chiredzi Rural District Council on Monday.

With a majority of four councillors against three for the MDC Alliance, Gibson Hwende won the chairperson’s post, beating Blessing Mazinyani with five votes against three.

The post of the deputy chairperson went to an independent candidate, Ropafadzo Makumire, who beat Liberty Macharaga of Zanu PF by a similar margin.

“I believe the task that has been installed on me by my fellow councillors is huge. It is not about which party I support, but what I represent, the interests of the people of Chiredzi,” Hwende said.

“I promise to push for development of the area without looking at who supports which party or what. All we want is development.”