LIVE: State of the Nation Address (SONA) and Official Opening of the 2nd Session of the 9th Parliament of Zimbabwe

Source: LIVE: State of the Nation Address (SONA) and Official Opening of the 2nd Session of the 9th Parliament of Zimbabwe | The Herald October 1, 2019

All is now set for the State of the Nation Address by President Mnangagwa at Parliament building in Harare, which is to be done simultaneously with the official opening of the Second Session of the Ninth Parliament.

Zimpapers Digital gives you updates on these important events

10:30 -Proceedings start at State House where there will be a photo-shoot before the Head of State and Government proceed to Parliament in a magnificent Rolls-Royce.

At least 32 horses from the Zimbabwe Republic Police (ZRP) will accompany the procession to Parliament. 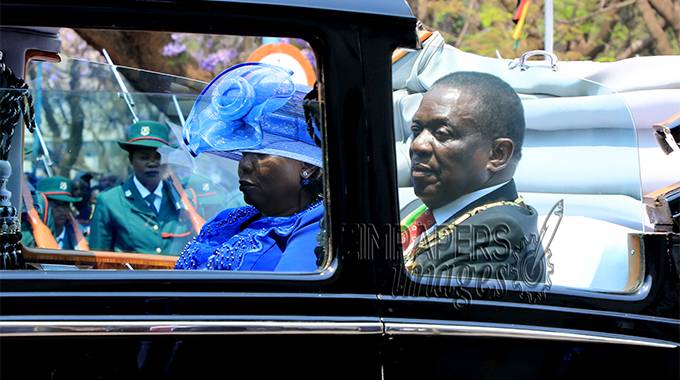 President Mnangagwa rides in a vintage Rolls Royce from State House to Parliament building on Tuesday with First Lady Auxillia Mnangagwa to present the State of the Nation Address as well as officially open the Second Session of the Ninth Parliament of Zimbabwe.

11:00 – President Mnangagwa is now on his way to Parliament from State House aboard a magnificent Rolls-Royce vintage.

11:21 – The National Anthem is now being sung accompanied by a 21 gun salute and a fly past. 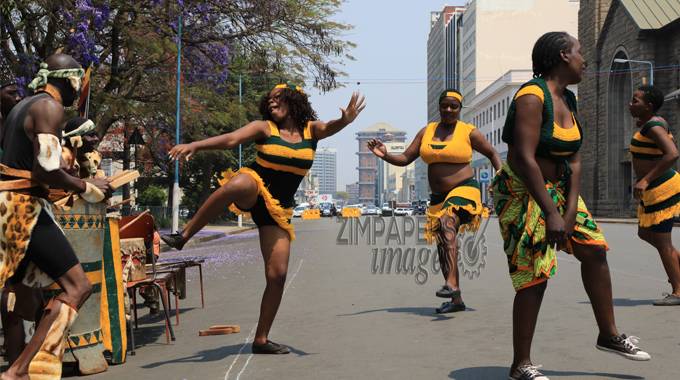 A cultural dance group entertains the crowd outside Parliament earlier on Tuesday ahead of the official opening of the Second Session of the Ninth Parliament by President Mnangagwa.

11:23 – Outside Parliament crowds are watching proceedings from Africa Unity Square.

11:24 – President Mnangagwa is now inspecting a Guard of Honour mounted by the Presidential Guard unit.

11: 26 – Today’s address is the second by President Mnangagwa in his capacity as Head of State and Government following his election into office on July 30.

President Mnangagwa is expected to spell out the legislative agenda by outlining the Bills set to be presented in the coming Session.

11:31 – The opening of the Second Session marks the end of the First Session of the Ninth Parliament, which saw at least 15 Bills out of 30 being presented. 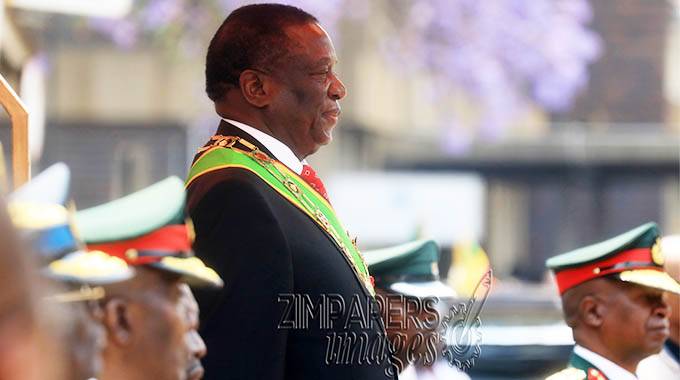 11:35 – Chief Justice Luke Malaba leads a procession of the judiciary into Parliament building followed by Speaker of Parliament, Vice President Mohadi and cabinet Ministers here present. Also in the procession are several legislators.

Also present are service chiefs, diplomats accredited to Zimbabwe, civic society members, and captains of industry, among other dignitaries.

11:45 – Senate President Cde Mabel Chinomona leads a procession of the Members of the The Senate (Upper House) into Parliament Building.

In terms of Section 116 of the Constitution of Zimbabwe, the Legislature consists of Parliament and the President. The President is part of the Legislature in his capacity as Head of State who holds the Public Seal and accordingly must assent to Bills passed by Parliament before they become law. 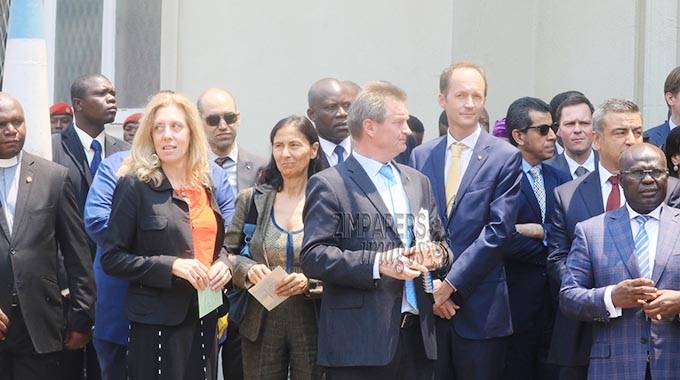 Some of the dignitaries who attended today’s State of the Nation Address by President Mnangagwa in Harare.

Pursuant to section 135 of the Constitution, the Speaker of the National Assembly is the Head of Parliament.

The Clerk of Parliament, appointed in terms of section 154 of the Constitution of Zimbabwe is responsible, subject to the law, for the day to day administration of Parliament. (Read more on structure of Parliament here)

At least 30 Bills were expected to be tabled in the First Session of the Ninth Parliament.

President Mnangagwa leads all to observe a minute of silence in remembrance of the late former President, Cde Robert Mugabe who died on September 6 2019 and was buried in Zvimba last weekend.

12:06 – President Mnangagwa asserts that Government is determined to support digital financial services to ensure financial inclusion and therefore appropriate measures are being taken to stabilize the cash situation in a way that will remove arbitrage behaviour which has lead to rampant abuse of existing transaction platforms to the disadvantage of the general public.

12:08 – He says recent manipulation of exchange rate by cash barons should not be tolerated. In the same vein, President Mnangagwa says
Government will unveil Small to Medium Enterprises (SME) Stock Exchange to unveil resources for them.

President Mnangagwa says Government has achieved a budget surplus and this has enabled it to meet demand for unbudgeted expenditure.

12:13 – President Mnangagwa also says the country was affected by drought and that Government has set aside $1,8 billion for production of food crops. He adds that in this regard only those farmers with a proven track record of delivering their harvest to the Grain marketing Board will be supported under the Command Agriculture programme.

12:16 – President Mnangagwa says modalities for duty-free importation of fertilizers and other agricultural commodities is underway through various facilities for both communal and commercial farmers.

He adds that local production of fertilizer however remains the long term solution.

12:20 – On mining President Mnangagwa says plans to make the industry a US$12 billion industry by 2022 will be unveiled soon. He says plans are also underway to make the country a transport and communication hub through the establishment of one stop border posts.

12:24 – President Mnangagwa paid tribute to the Governments of the United Arab Emirates and India along with other partners for their assistance in revamping the country’s health system.

12:25 – He also said restructuring of state and publicly owned enterprises is ongoing with companies like the People’s Own Savings Bank (POSB) and the Grain Marketing Board undergoing full and partial privatization among other strategies.

12:30 – President Mnangagwa also says Government will continue with the re-engagement process and thanked SADC for the resolution at its last summit to declare October 25 the Anti-Sanctions Day.

12:33 – President Mnangagwa now turns to the legislative agenda and commends the ongoing alignment of laws to the constitution.

12:35 – President Mnangagwa also says Bills to enforce freedom of information and access to information should be expedited whilst Medical Aid Societies will now be regulated by the creation of a commission so that they stick to their mandate.

12:37 – He bemoans the slow space of movement of Bills in Parliament and asserts that such kind of behaviour should not be allowed to continue.

He urges Parliament to work for the betterment of people’s lives.

12:40 – President Mnangagwa ends his address by inviting those political parties shunning the ongoing political dialogue to be part of the process.

LEGISLATIVE AGENDA
The Second Session of the Ninth Parliament is expected to continue with the re-alignment of various laws to the constitution. Some of the laws and bills under consideration include: