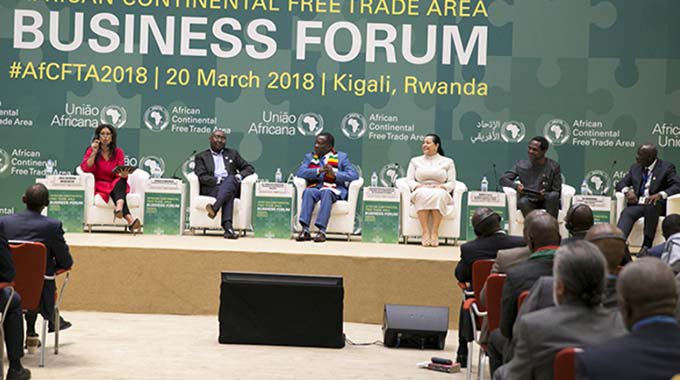 Enacy Mapakame Business Reporter
A lot still needs to be done before Zimbabwe can start accruing benefits from the Africa Continental Free Trade Area (AfCFTA) agreement, to which it is a signatory, a senior Government official has said.

Last week 44 African countries signed a framework seeking to establish the AfCFTA, the largest free trade agreement since the creation of the World Trade Organisation.

The free trade area aims to create a single market for goods and services in Africa. By 2030 the market size is expected to include 1,7 billion people with over $6,7 trillion of aggregate consumer and business spending.

However, there seems to be some way to go before full implementation of the free trade area can be achieved.

“Zimbabwe has indicated that it is currently facing challenges in implementing its obligations under Sadc and would be hesitant to undertake extra liberalisation commitments under the continental free trade area which the country will find difficulty to implement,” she said.

According to Shonhiwa, the 15 percent tariff lines constitute the strategic sectors and products that Zimbabwe is protecting under the import management programme.

She said this during a Confederation of Zimbabwe Industries (CZI) meeting on the AfCFTA.

The AfCFTA is expected to resolve the challenges of multiple and overlapping memberships and expedite the regional and continental integration process.

Although there were timelines provided from the African Union on procedures towards implementation of the agreement, Shonhiwa indicated there was still work to be done, including negotiations and ratification of the agreements before it is taken to Parliament as a full package.

One of the sticky areas to be addressed include the Rules of Origin which will be one of the annexes for the agreement.

It is also understood Zimbabwe still requires some policy space to enable the country to re-industrialise and make its products competitive on the continental market.

The modalities on the tariff negotiations were adopted with the level of ambition of 90 percent to be liberalised over a five-year period.

However, Zimbabwe and six other member countries, that is Eritrea, Ethiopia, Madagascar, Malawi, Sudan and Zambia had reservations on the 90 percent and favoured 85 percent as a starting point as they re-industrialise.

The AfCFTA will open up for formidable market access opportunities for the private sector. This will give local industry access to over a billion people and an estimated over $3 trillion gross domestic product (GDP) market on the whole continent.

However, it is also understood, 11 countries did not sign up for the agreement and these include South Africa.

In light of this, industrialists contend the absence of South Africa, which is Zimbabwe’s biggest trading partner was a blow to the local industry, and would take time for Zimbabwe to start benefiting from the agreement.

But local industry needed to put more effort towards competitiveness of their products for them to stand a chance on the continental market.

“Industry must pull up its socks because we need to do our bit as industry, right now its Government that has done the work.

“We need to open up, we cannot stay closed forever, but now we need to see which areas we can open up first so that we capacitate them and make them competitive on the all Africa free trade area,” he said.