Makarau on verge of JSC ouster 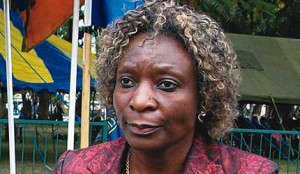 JUDICIAL Service Commission (JSC) secretary Justice Rita Makarau could lose her post as it emerged the new administration is making manoeuvres to push her out of the position.

Makarau recently resigned as Zimbabwe Electoral Commission (Zec) chairperson, a few months before crucial general elections, whose credibility will determine whether the country ends 20 years of international isolation. Zimbabwe is due to hold elections before August next year.

Officials at Zec say she was pushed out of the commission following former president Robert Mugabe’s ouster. Makarau was considered very close to Mugabe.

A senior official in the judiciary this week said it would not be surprising if Makarau was relieved of her duties as JSC secretary due to her alleged close links with Mugabe.

“There is a push to have Justice Makarau relieved of her duties as JSC secretary. The appointment was administrative, it was not constitutional, so it is possible that she can be elbowed out. However, she cannot be easily removed from her job as a Supreme Court judge. That is a constitutional appointment,” the official said.

“Makarau’s position is important because it deals with the administrative issues of the country’s judicial system. Issues to do with salaries and the administration side of court cases.”

Makarau told Zimbabwe Independent she had “no comment” when asked if she was being elbowed out of the JSC.

Justice Minister Ziyambi Ziyambi referred questions to Chief Justice Luke Malaba although he stressed Makarau was in the position in an acting capacity.

“I think the best person to talk to is the Chief Justice. As the ministry we are only advisors and we do not interfere with the JSC’s work. What to note, though, is that Justice Makarau has been acting JSC secretary since 2013. She was not appointed secretary,” Ziyambi said.

Mugabe eventually appointed Chief Justice Luke Malaba, who came out tops in interviews conducted by the JSC with a score of 91%. Makarau scored 90% in the public interviews.

The JSC is a statutory body founded on Section 190 of the Constitution. It has three main functions, which are: to render advice to the government on any matter pertaining to the judiciary which advice must be regarded by the government; to promote and facilitate the independence and accountability of the judiciary and to make regulations in consultation with the Minister of Justice.

The constitution also mandates the JSC with nominating judges including acting judges. It also has the task of recommending to the President to establish a tribunal to look into the question whether a judge has committed an act of misconduct or remains suitable to hold the office of a judge.

Meanwhile, Mnangagwa is carrying out consultations on the appointment of the next deputy chief justice (DCJ), a post left vacant after Malaba’s appointment in March.

Justice permanent secretary Virginia Mabhiza last week told the Independent that the president was still consulting. Mnangagwa is also expected to appoint Supreme Court judges following public interviews which were done more than a year ago.

Constitutional lawyers have been arguing Mugabe abdicated on his duties by failing to make appointments despite Section 324 of the Constitution stating that: “All constitutional obligations must be performed diligently and without delay”.

According to the Constitution Amendment Bill Number One signed into law by former president Robert Mugabe in September, the President is empowered to select the Chief Justice, his deputy and the Judge President. These appointees will not be subjected to interviews in public as provided in the provisions of the current constitution.

“The President is still consulting the Judicial Service Commission on the appointment of the deputy chief justice,” Mabhiza said.

Asked about the appointment of Supreme Court judges, Mabhiza said: “The Judicial Service Commission is also keen on that issue, judging from the continuous inquiry. The appointments are under consideration. Interviews were already done and the President will appoint when he sees it fit.”