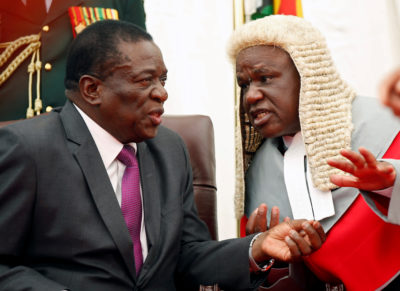 In a landmark ruling read by Justice Happias Zhou, three High Court judges declared that Malaba ceased to be chief justice when he turned 70, in line with the original 2013 constitution.

There were indications, however, that the government would appeal the judgement and hand Malaba a lifeline.

“It won’t have much effect in the sense that they will appeal to the Supreme Court and just the noting of the appeal will suspend the operations of that order, meaning the chief justice will just have to proceed until that appeal is determined,” said Lovemore Madhuku,  a constitutional law expert.

“It shouldn’t surprise anyone, which is the principle of separation of power.”

The judges ruled that all incumbent judges of the senior courts could not benefit from an amendment to the constitution extending their term limits past retirement age.

“The term extension does not apply to any sitting judges of the Constitutional Court and Supreme Court,” Zhou said in the ruling.

The Judicial Service Commission (JSC) had filed an application challenging the application and tried to force the three judges appointed by judge president Justice George Chiweshe to deal with the matter to recuse themselves, alleging bias.

Kika, represented by Advocate Thabani Mpofu instructed by Cinginkosi Dube of Scanlen and Holderness, filed an urgent High Court application suing Justice minister Ziyambi Ziyambi and the entire superior court structure, including all the judges of the Supreme Court and Constitutional Court, on the matter.

In his application, Kika said it was clear that the purpose behind the amendment was to “assail judicial independence”.

The Bill was fast-tracked in April this year by Ziyambi in the National Assembly before Zanu PF and MDC-T senators voted for it on May 4 with Mnangagwa signing it into law three days later.

“History has a place for you,” Chamisa tweeted after the ruling.

“You serve with dignity and decorum.

“Your indefatigable stamina and passion for justice is outstandingly phenomenal.

“The future is exciting.”

“The fightback is on. No retreat or surrender.”

Mnangagwa’s spokesperson George Charamba downplayed the ruling on Twitter and indicated that the government would appeal.

“Enjoy while it lasts. We are fighters, trust us,” Charamba tweeted.

Lawyers said they would now return to court to challenge the procedure used to pass the amendments by suing the National Assembly, the Senate and Mnangagwa.

The over 20 amendments to the supreme law introduced through the Constitution Amendment Act Number 2  have divided opinion with critics saying the changes have created an imperial presidency.

They gave the president powers to appoint the country’s top judges and scrapped the running mate clause for vice-presidents.