Nelson Mandela, now in a hospital, quit after a single term as South African president. Robert Mugabe, Africa’s oldest head of state and the only president Zimbabwe has ever known, is still in charge after disputed elections last week.

These two larger-than-life figures, who chose different paths once in power, represent competing styles and ideas that resonate beyond southern Africa.

The question for any leader with the leverage of popular sentiment or the backing of security forces and other state institutions is: When is it time to quit? Mandela and Mugabe were among that generation of African decision-makers whose reputations were forged in the struggle against colonialism or white minority rule. It was hard for many to let go of power, succumbing to the temptations of authoritarian control and its material spoils.

The narratives of the two men ran in parallel but the stature of Mugabe, a former guerrilla and colossus of the liberation struggle in southern Africa, ebbed when Mandela walked out of a South African prison in 1990.

The charismatic Mandela, his legacy cemented by outreach to his former enemies, physically towered over Mugabe, a stiffer figure who had chosen an authoritarian path. The two were cordial but never close.

Mugabe, who is 89 and in seemingly decent health, has led Zimbabwe for so long that his defiant persona is embedded in the national identity of a country that has suffered economic turmoil, Western sanctions, periodic spasms of violence and periodic mass emigration to neighbouring South Africa. 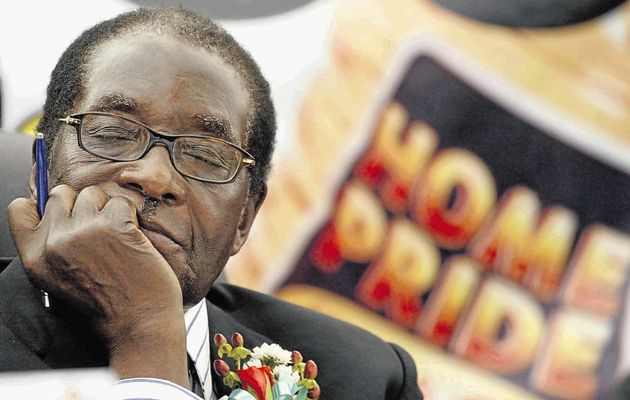 He dismisses allegations by the demoralised opposition of vote-rigging in the July 31 election, and is gearing up for his seventh term as president. He made black empowerment the bedrock of his election campaign, promising to take over the remaining 1138 foreign and white-owned businesses in Zimbabwe.

In a rare television interview this year, Mugabe criticised Mandela for being too soft on South Africa’s white minority after the end of apartheid. Mandela did not want to scare off investment by alienating the country’s former masters, who dominated the economy. Today, South Africa still struggles with economic inequality, though it avoided the economic freefall that played out in Zimbabwe.

The former South African president had “gone a bit far in doing good to non-black communities” at the expense of blacks, Mugabe told the South African Broadcasting Corp.

“That is being too saintly, too good, too much of a saint,” said Mugabe, whose ZANU-PF party in earlier years had traditionally supported South Africa’s Pan Africanist Congress, the second liberation movement after Mandela’s more broad-based African National Congress.

Since 2000, the often violent seizures of thousands of white-owned commercial farms by Mugabe loyalists disrupted Zimbabwe’s agriculture-based economy. After the farm seizures, Mugabe’s party demanded that companies not already owned by blacks yield 51% of assets and control. Zimbabwe, a former breadbasket, now relies on food imports.

Mandela, who turned 95 last month, stepped down in 1999 after a single five-year presidential term, during which he preached reconciliation. The decision not to seek a second term, a disappointment to his followers, fit with his insistence that leadership was a collective effort, not an individual one. It could also be seen as a message to other continental leaders who had opted to stay put.

Mugabe, in power since Zimbabwe won independence in 1980, has outfoxed his opponents time and again. Mandela, who was admitted to a hospital two months ago for a lung infection and is critically ill, seemed to tire of daily politics while in the presidency and had a light touch in his last years in power.

On visits to Zimbabwe, Mandela’s easy-going style as president contrasted with Mugabe’s austere manner and curt attitude toward the media.

At one news conference, Mugabe sat bunched up and ill-at-ease at the far end of a couch from a relaxed Mandela, who fielded one last question in an airport VIP lounge but said his answer would be too long.

“Come and visit me at home, buy me a rum and I’ll tell you everything,” Mandela quipped.