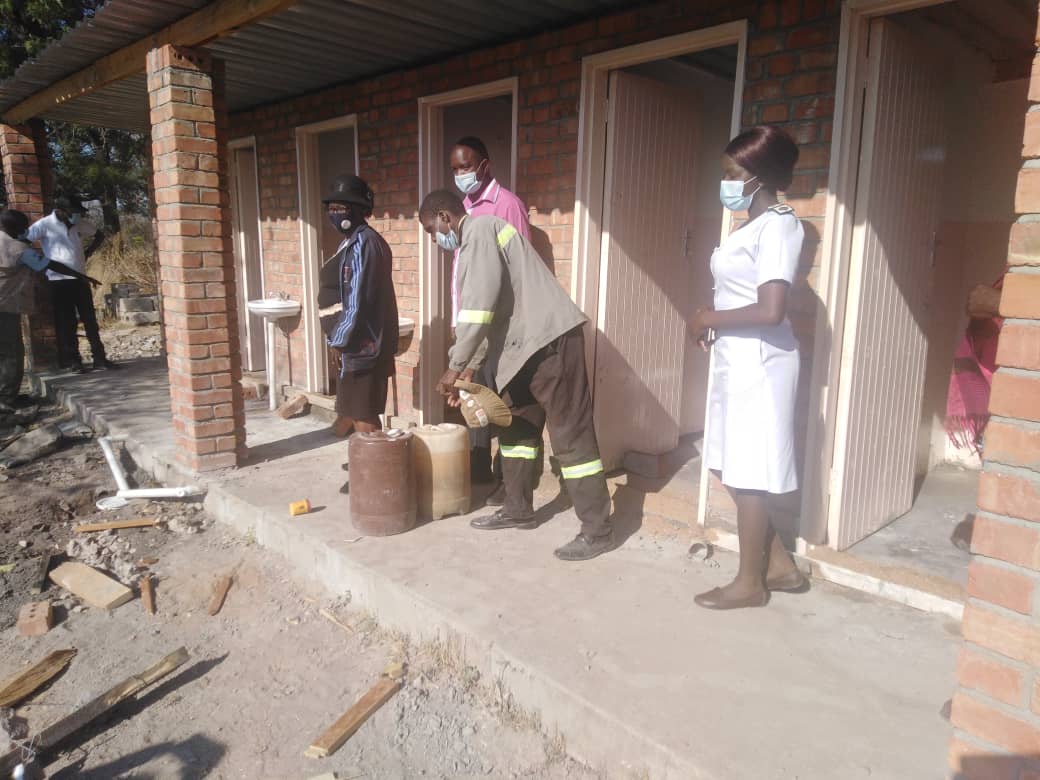 New toilets being constructed at Marula clinic in Mangwe district

The clinic, which serves close to 5 000 households drawn from communities in Mangwe, Bulilima and Matobo districts, has been facing water shortages, compromising health delivery service.

Operations at the health centre were nearly suspended after Blair toilets were filled up during the rainy season while the flash toilets could not be used due to water shortages.

Staff at the clinic at some point had to rely on a flash toilet inside the clinic, but patients would resort to open defecation outside the health facility.

It is against this background that the Zimbabwe Red Society with support of the United Nations Children’s Fund (UNICEF) chipped in and constructed flash toilets at Marula clinic.

The US$650 000 water, sanitation and hygiene project was made possible through a grant facility from the African Development Bank and is being implemented in seven districts namely Harare (Hopley), Marondera Urban, Binga, Muzarabani, Mangwe, Siakobvu and Kwekwe rural.

“Our greatest challenge at the health facility is water. We don’t have continuous and affordable access to sufficient safe water at this clinic,” said Ngonidzashe Chemhuru, Mangwe, councillor for the area.

“This clinic was almost closed because there was no water and the ablution facilities were bad. Health services were affected very much and you can’t talk about health when there is no water.”

“We engaged the authorities at the top and efforts are being done to address the situation. I am happy Red Cross has come to our rescue as they have constructed the flash toilets and rehabilitated the pipes that go to the toilets.

“They have connected a pump that is drawing water from a well to the toilets. Red Cross are working with the District Development Fund and government ministries in this project.”

Chemhuru said the flash toilets will go a long way in addressing sanitation and hygiene concerns of patients at the clinic.

However, she said despite the toilet project, the clinic and her community were facing water shortages.

“Our situation was exacerbated after Goodluck Dam, where the community through Zinwa draws its water from was away last year,” said Chemhuru.

“People are now resorting to alternative, unsafe water sources, which might cause diseases.”

A villager, Cortini Mpofu said people in the area rely on one water borehole which is coordinated by Zinwa.

“We don’t have water for domestic use and our livestock have nothing to drink after our only source Goodluck was washed away,” Mpofu said.

ZRCS secretary-general Elias Hwenga said the construction of the toilets and other water,  sanitation and hygiene services were part of a broader programme which the organisation started last year in November.

“The project in Mangwe is part of a broader WASH programme that we launched in November to promote sanitation and hygiene in the wake of Covid-19 in selected districts across the country,” Hwenga said.

“It was a six-month project, but we were derailed by the Covid-19-induced lockdowns. We are pleased to confirm that we are almost completing most of the projects.”

In Mangwe ZRCS held a number of campaigns aimed at raising Covid-19 awareness, and donated water buckets and soap, among other projects aimed at promoting hygiene.