Many Zimbabweans sell goods from their cars in hard times

Source: Many Zimbabweans sell goods from their cars in hard times – AP 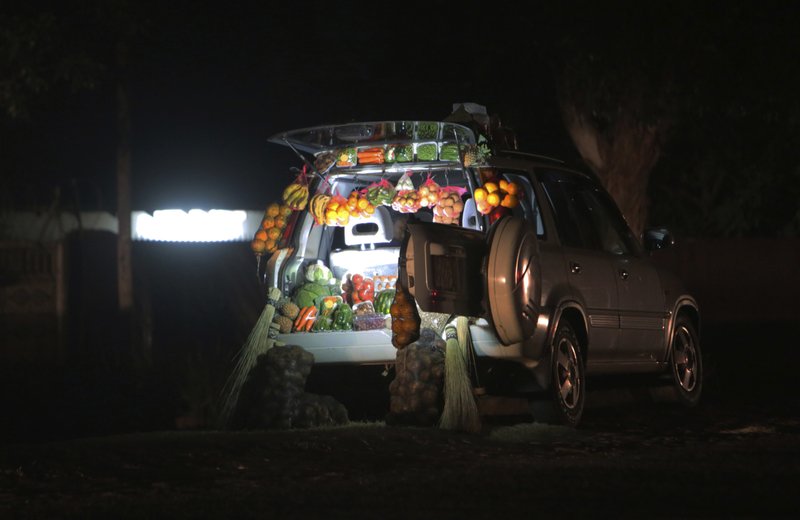 A car displays fruits and vegetables while selling them by the side of a busy road in Harare, Zimbabwe, Tuesday, June 23, 2020. Cars have become mobile markets in Zimbabwe where enterprising residents are selling goods from their vehicles to cope with economic hardships caused by the coronavirus. With their car doors and trunks wide open by the side of busy roads, eager sellers display a colorful array of goods in Harare, the capital. (AP Photo/Tsvangirayi Mukwazhi)

HARARE, Zimbabwe (AP) — Cars have become mobile markets in Zimbabwe where enterprising residents are selling goods from their vehicles to cope with economic hardships caused by the coronavirus.

With their car doors and trunks wide open by the side of busy roads, eager sellers display a colorful array of goods in Harare, the capital city.

In the trunk of a Mercedes, packets of rice, sugar and candies are neatly laid next to baby clothes, while blankets are displayed on the roof. The owner invites passersby to take a look, as his eyes dart sideways, on the lookout for police. Such unlicensed street vending is illegal and police have made a few arrests, but not enough to discourage the widespread practice.

Shelton Marange worked as a mechanic before he was laid off in May. Nowadays, he braves the southern hemisphere’s chilly winter weather and the risk of arrest or contracting coronavirus to drive to a village 30 kilometers (18 miles) away at dawn to buy vegetables from rural farmers. Then he heads back to Harare to resell the goods from the back of his small truck.

“These are my bolts, nuts, spanners these days,” he said jokingly, pointing to cabbages, carrots, tomatoes, onions and potatoes packed in the back of the pickup. To beat the competition, many of whom stay in one spot, Marange moves around, selling his produce from spot to spot from morning until dusk.

Zimbabwe’s economy was already in the doldrums before the coronavirus, beset by rising inflation, the declining value of the local currency, high unemployment, and acute shortages of water, electricity and gas.

The country’s economy is likely to decline by more than 10% this year, considerably more than the 3.2% contraction projected for the entire sub-Saharan Africa economy, according to the International Monetary Fund.

Unable to cope with the double burden of the economic decline and restrictions caused by the coronavirus, many of the few industries and companies still operating in Zimbabwe are either closing down or cutting jobs.

About 25% of jobs in the formal sector could be lost due to the contraction caused by COVID-19, according to the Zimbabwe National Chamber of Commerce.

The figures could be even worse, said Peter Mutasa, president of the Zimbabwe Congress of Trade Unions, noting that even formally employed people such as civil servants earning less than $50 a month are complementing their incomes by selling goods from their cars.

“Wages are now useless because of inflation,” he said. “Everyone is crying.”

Selling from cars is also prevalent in other parts of Africa.

Joseph Chege used to be an electronics dealer on the outskirts of Kenya’s capital, Nairobi, but anti-COVID-19 restrictions forced him to close his business. Faced with payments for loans he had taken to expand his now-shut business, Chege says he had to come up with a quick alternative to meet his financial obligations.

He realized that demand for food had remained the same but there was a shortfall in supply in Nairobi because of movement restrictions. He also realized that the farmers in his community were not able to sell their produce because the local market had been closed by a ban on crowded places.

Chege went around farms and bought the best produce at the cheapest price and then drove to the populated neighborhoods in Nairobi, parked his car, and opened the trunk to display the fresh produce.

“It did not take long and before lunch-time I was out of stock, so I drove back and got more produce,” he said.

Chege says that the profit from selling vegetables and fruits is significantly less than what he used to make but he is grateful to be able to meet some of his financial obligations when many people are losing their livelihoods. Although Kenya has now lifted travel restrictions, Chege says the economic downturn will prevent him from returning to his electronics business for a while yet.

In Zimbabwe, selling items from the back of car trunks to beat economic hardships is not completely new, but it was mainly limited to those selling second-hand clothes.

Now, newly unemployed people clog roadsides and street corners in both rich and poor suburbs in Harare to sell from their cars. Many said the items for sale are smuggled from neighboring South Africa, which has closed its border posts with Zimbabwe as part of lockdown measures.

Zimbabwe’s economy had already shifted from full-time, salaried jobs to self-employed trading due to a steady trend of de-industrialization over the past two decades, and the coronavirus has just worsened the situation, said some economists.

For Marshall Chinyani, who abandoned work as a schoolteacher three years ago to focus on a small import business that closed due to the coronavirus, selling from his car is the new normal.

“I am here because of the coronavirus pandemic that forced some of us to leave our jobs (and go) into the streets to sell these,” he said, standing next to his car packed with vegetables on the side of a busy road in Belgravia, a Harare suburb with many embassies, U.N agencies and international aid organizations.

“We were never used to this,” he said. “But we were forced to leave our offices and our shops.”