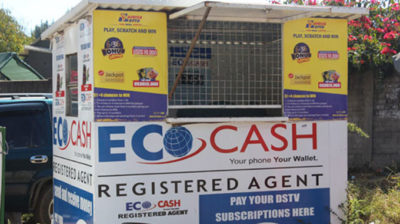 Every day for weeks on end, Samantha Murozoki has made sure that the poorest citizens of Harare’s Chitungwiza suburb have had something to eat, despite the turmoil of Zimbabwe’s pandemic lockdown and economic collapse.

Ms Murozoki and other volunteers at the soup kitchen provide meals for thousands in the southern African nation’s capital, where hunger was rife even before the virus, inflation is over 700 per cent, and the Zimbabwe dollar has lost almost all of its value just one year after it became the country’s only legal tender.

Restrictions introduced at the end of June on Ecocash, the country’s mobile-money monopoly, by the government of President Emmerson Mnangagwa, have affected millions like Ms Murozoki for whom the platform has all but replaced the hard cash that has vanished in shortages caused by the crisis.

“We are solely dependent on donations and the majority of donations that come as cash, come from Ecocash,” Ms Murozoki said of how a ban on big payments on the service, targeted at black-market traders accused of using Ecocash to drive down the currency, has affected her.

Traders who supply mealie meal, peanut butter, and other bulk goods every day also relied on Ecocash in place of other forms of payment. “We are wondering how we are going to sustain this,” she said.

Ms Murozoki’s troubles reveal the human cost of increasingly heavy-handed attempts by Mr Mnangagwa’s government to stem the fall of the Zimbabwe dollar, which it floated last year at Z$2.5 to the US dollar but now trades at Z$100 on the black market — a barometer of evaporating trust in the successors to Robert Mugabe, the late dictator deposed in a 2017 coup.

Investors and analysts say that the currency’s drop and the rise of the black market have been driven by years of inconsistent central bank policies and broader uncertainty about Zimbabwe’s stability.

“Zimbabwe is in desperate need of development capital, but by insisting that it — the government — should be incorporated into every investment decision, the authorities have created an unattractive investment climate for the whole country,” John Robertson, a Zimbabwean economist, said.

Late last month the government blamed the currency’s fall on Ecocash and the local stock market, which has risen sixfold this year as investors sought refuge in real assets from the triple-digit inflation.

It has shut the stock market, a vivid contrast with a pledge Mr Mnangagwa once made to be “open for business” after Mugabe’s misrule. Ecocash, set up by Econet, the African telecom giant, has denied wrongdoing.

No one trusts these guys . . . the Zimbabwe dollar is not a store of value, it is not a unit of account, it is merely a means of exchange. The government is undermining the only function that the currency has left

The ruling Zanu-PF this week also demanded the expulsion of Old Mutual from the country’s stock market, after it accused local traders in the African financial group’s shares of conspiring to accelerate a worsening currency collapse.

“I don’t understand who did this, or why it was done . . . you need to give investors predictability and certainty,” said one business executive of the stock market’s closure. He declined to be named. As a means to arrest the currency crisis, shutting down the stock market was like “killing a mosquito with a nuclear weapon”, the executive added.

The mystery over the restrictions on Ecocash and the stock exchange has added to growing unease over who controls Zimbabwe’s economy — civilian reformers brought in at the finance ministry and central bank, or the generals who elevated Mr Mnangagwa to power.

Oversight of mobile money and the stock market are responsibilities of the bank and ministry respectively. But it was Zimbabwe’s joint operations command, a group of senior security chiefs, that ordered the bans, according to reports by Bloomberg and one person briefed on the situation at the central bank.

Oppah Muchinguri, Zimbabwe’s defence minister who chairs the body, the central bank, and the ministry of finance did not respond to requests for comment on the suspensions or the JOC’s role in them

The JOC has regularly usurped civilian authority in Zimbabwe during the past two decades, including the palace coup which overthrew Mugabe. In June, its officials issued a rare public statement to dispel rumours of a similar coup to unseat Mr Mnangagwa.

Newer Post
Many Zimbabweans sell goods from their cars in hard times
Older Post
AMHVoices: It all boils down to leadership deficit