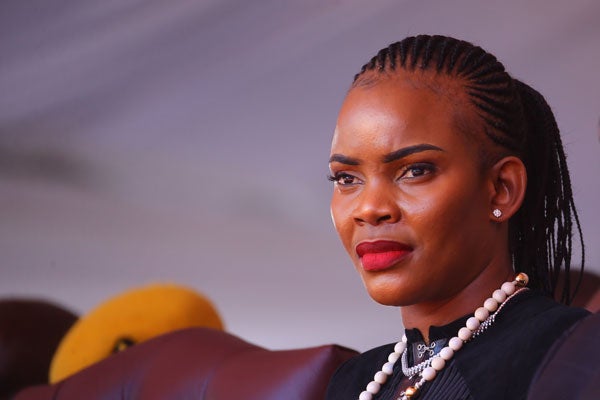 Vice-President Constantino Chiwenga’s estranged wife says she fears for her life as unknown people are allegedly stalking her.

Marry told a British newspaper The Times that her life had been turned upside down since her initial arrest in December last year on allegations of trying to kill her husband and money laundering.

A divorce battle involving Chiwenga and the former model transfixed the country with murky allegations of attempted murder, voodoo and drug addiction.
According to Marry (39), however, the reality of her estrangement from Chiwenga, the former general who toppled Robert Mugabe, is even darker.

In an interview with The Times, the former model described “feeling thrown to the wolves”, her terror following late-night car chases and fears that her calls are being monitored since her 62-year-old husband demanded a divorce three months ago.

Her comments have shed rare light on the upper echelons of power in Zimbabwe and painted a picture of lavish wealth enjoyed by an unaccountable few, while millions lurch towards starvation and the economy withers.

“I will never be left to live in peace. It will be a life in and out of jail, or no life at all,” she said following her recent spell in prison.

Marry is accused of trying to murder her husband and other charges including money laundering. She insists that she is innocent.

“My protection has been taken away and if anything happened to me, there would be no witnesses. It could easily be explained away,” she said.

In papers filed in court, the couple’s wrangling over cash, a contentious 600-acre farm and luxury cars have been laid bare.

This month she is appealing to the Supreme Court for custody of the three children she shares with the former army chief: two boys and a girl aged nine, eight and six.

She said that being refused access to them since her arrest in December “has broken my heart open”, adding that she fears “command justice” directed from higher powers will ultimately thwart her efforts.

“It feels like David and Goliath with the state machinery being used against one woman,” she added.

Born into a wealthy family, Marry met her husband a decade ago when they were neighbours in an upmarket suburb of Harare.

“I knew nothing of politics and now probably know too much,” she said in a call from Harare, where she has been staying with her mother since losing access to the family mansion.

She described her relationship with President Emmerson Mnangagwa (77) as “very good”, but she is reluctant to draw him into the turmoil.

“I’ve been involved at the highest level of the ruling party for a decade and lived through Operation Restore Legacy [the Mugabe ousting].

“My husband has many enemies — within his own party, the opposition party and Zimbabweans generally who are facing many challenges now.

“That makes me feel very vulnerable.”

Marry remains a divisive figure. The designer wardrobe and extravagant lifestyle that she lost in her separation drew comparisons with Grace Mugabe, the unpopular widow of the late president.

Yet her arrest and willingness to stand up to the feared Chiwenga, who has been blamed for a string of violent crackdowns, has seen the public mood soften towards her.

She dismissed the allegations that she disconnected her husband from life-support equipment at a South African hospital last July, and questioned why no allegation was made against her until five months later when Chiwenga demanded a divorce.

“Too much of a coincidence,” she concluded.

She is also accused of illegally transferring almost US$1million out of Zimbabwe to buy cars and property in neighbouring South Africa without her husband’s knowledge.

Marry denies laundering money and said that any cash she had access to was no secret, claiming it had come from cash allowances given to Zimbabwe’s elite.

“We all got that and if you save it all, it’s enough to buy you a property outside the country. Everybody has one,” she said.

Chiwenga did not respond to a request for comments.
—Additional reporting by Staff Reporter