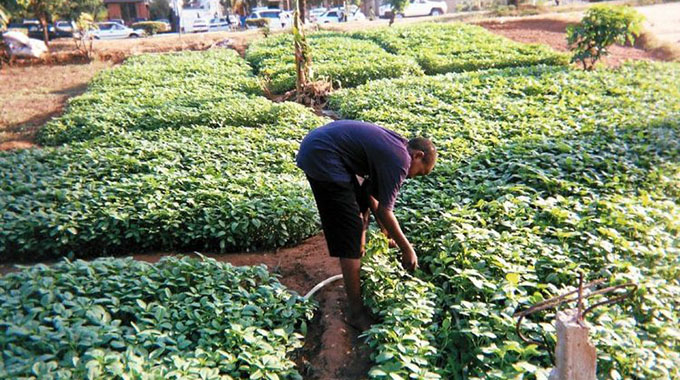 Blessings Chidakwa in Kadoma
Farmers in Mashonaland West Province are counting their losses after their early planted crop failed to  germinate.

As a result, they are being forced to buy more inputs including seed, weed control chemicals and fertilisers before replanting.

The most affected farmers are those who planted maize early in areas such as Martin Spur, Chegutu, Sanyati and Mhondoro-Ngezi.

Some of them have already started replanting.

Sanyati district crop and livestock production officer Mrs Evelyn Ndoro said most farmers from the district who planted with the early rains were badly affected.

“Our rain season had a false start, affecting the germination process among those who had utilised the early rains,” she said.

Among the farmers who suffered the heaviest losses are those on Government’s Command Agriculture programme.

Mrs Ndoro, however, said the current rainfall patterns were now ideal for farmers to start planting.

Mr Albert Murove of Martin Spur between Chegutu and Kadoma, who got inputs under Command Agriculture, has started replanting.

“I had planted maize three weeks ago and it failed to germinate with about one and half hectares having been affected.

“Considering the high costs of inputs it’s a major blow for me, as initially I had benefited from Command Agriculture but now I have to fork out inputs using my personal resources,” he said.

A farmer from Sanyati who preferred anonymity said he was not spared from the losses.

“I am considering replanting six hectares as the seed failed to germinate well but the cost of inputs is prohibitively high,” said the source.

Meanwhile, farmers are being encouraged to be on the lookout for the fall armyworm from this week when most crops are expected to have germinated as early detection will reduce damage to crops, writes our correspondent Lawrence  Chitumba.

In an interview last week, Mashonaland Central provincial livestock officer Mr Daniel Kampiyao said: “So far we have not yet received any cases of the fall armyworm because most people have not yet planted their crops, but from next week when most of the crops would have germinated so we encourage farmers to be always on the lookout.

“This includes capacity building for our staff which is done every year as they believe there may be new chemicals and innovations to control the fall armyworm.

“The fall armyworm explodes if we experience hot weather conditions two to three days after some rains. Some of the farmers can now identify the fall armyworm, but for those who might not be sure about it they must approach the nearest extension officer for help as there is a tendency to mistaken the fall armyworm for the African armyworm which does less damage and is easy to control.”

Mr Kampiyao said farmers must adopt contingent measures that correspond with the predicted normal to below normal rainfall for the 20181-19 agricultural season like planting drought-tolerant seed varieties.

He encouraged farmers to stagger their planting, adding that when ploughing farmers must employ deep ploughing methods using rippers.

For areas like Mbire and Rushinga which receives low rainfall, Mr Kampiyao encouraged the growing of small grains as they are drought resistant unlike crops like maize which are known not to do well in these areas in order to improve on food security since they are also recommended by nutritionists.

On livestock, they were encouraging farmers to dip their cattle on a weekly basis to avoid tick-borne diseases and to vaccinate them against diseases like lumpy  skin.