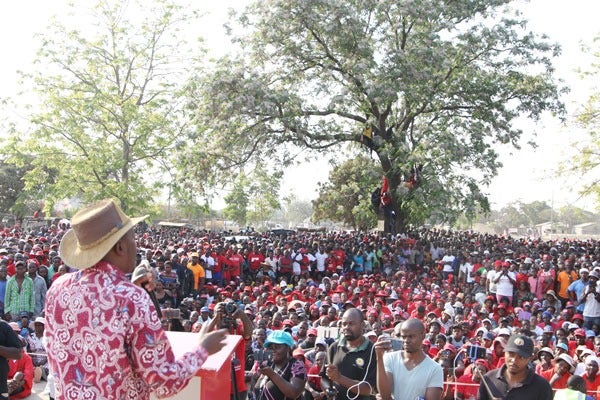 MASVINGO was tense and under lockdown for the past two days ahead of a planned MDC demonstration which was banned on the 11th hour yesterday as the President Emmerson Mnangagwa’s administration moved to quell dissent over a tanked economy and skyrocketing inflation.

MDC Manicaland provincial chairperson Prosper Mutseyami confirmed the ban on the Mutare protest march, adding that they were appealing the matter.

“We have sad news that the police have barred our demonstration claiming shortage of staff, fear of violence . . . but we don’t subscribe to violence as a progressive party,” he said.

“Our demonstration is on pending appeal at court, we are going to challenge the police decision at court, but I believe we have followed all procedures.”

Mutseyami added: “Security details are everywhere in Mutare, most of them are in plain clothes. We don’t know why this government is doing this? At least the international community is watching.”

In Masvingo, armed soldiers were patrolling the high-density suburbs on Tuesday night, while police moved with hailers warning people against participating in the protests as they would “rot in jail”.

Yesterday morning, soldiers also made drills in town in a show of force.

Shop owners, fearing violence and destruction of property, delayed opening, with some opening at the behest of the soldiers.

However, the situation was generally calm.

The MDC Masvingo province appealed against the ban yesterday morning, and the case was postponed to 12pm, before being deferred to 3pm by provincial magistrate Marehwanazvo Gofa.

Gofa dismissed the appeal at 4pm with costs due to technicalities, saying the right to demonstrate is not absolute and that there was no appeal to talk about.

Police maintained a heavy presence outside the court.
MDC Masvingo provincial chair James Gumbi accused the judiciary of being captured and claimed everything was stage-managed.

“It was given and it had been clear from the onset that everything is command, directive and consultative. Who will stage a demo that was supposed to start at 10am and end at 4pm when the ruling was given at 4pm?
It’s stage-managed,” he said.

He said the State applied delaying tactics simply to frustrate their planned protest.

“This was a delayed match . . . the judiciary is captured by Zanu PF. The magistrate kept postponing the case so that the time we were supposed to have the demonstration lapses. In other words, they have foiled our
attempts,” Gumbi said.

MDC provincial administrator Peter Chigaba, who notified the police of the demonstration, was also arrested on Tuesday evening for allegedly distributing fliers, while mobilising for the anti-government protest.

His lawyer said he was being charged with contravening section 31 (a) of the Criminal Law Codification and Reform Act for allegedly publishing or communicating statements which are materially false with the intention to incite public violence because the fliers were reportedly written that Mnangagwa stole last year’s elections.

The lawyer said Chigaba was supposed to appear in courttoday, but the case is now set to proceed by way of summons.