The residents of Masvingo Central ward 16 have called for an end to the partisan distribution of government aid mostly by Zanu PF officials and groups of people purporting to be war veterans in rural areas.

Source: Masvingo Residents Calls For An End To Partisan Distribution Of Government Aid – The Zimbabwean 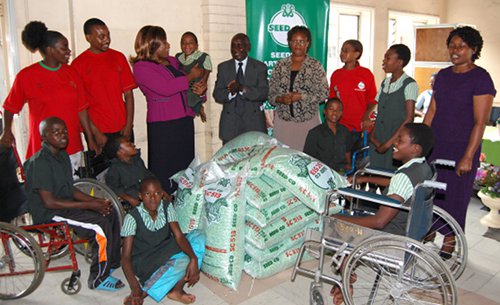 This comes out after former Zanu PF Councillor for ward 16 Last Jazi and Samuel Masimba Zambuko a war vet have been reportedly hijacked the Presidential Agricultural Inputs Scheme, sidelining the sitting MDC Councillor Edmore Dhemba who was supposed to preside over the inputs distribution process.

Councillor Dhemba expressed that, he was block by the Zanu PF officials from collecting the maize seed at the Grain Marketing Board (GMB) Masvingo depot on the last minute after processing all the required papers and paying transport costs. “ when I go to the GMB for collection I was told that the GMB was ordered by the office of the Minister of State for Masvingo Province Mr Chadzamira not to give me the seed (800KGs) until the beneficiary list was verified by the party officials.”, said Councilor Dhemba.

It was further reported that Mr Jazi and Mr Zambuko convened the beneficiary selection meeting where the well-known opposition supported were turned away by the Zanu PF youth who proclaims that the maize seed was a donation to the party by President Cde Mnangagwa, therefore the scheme was strictly targeting Zanu PF supporters as beneficiaries. On Tuesday 12 November 2019, Mr Jazi called for a distribution meeting in which those known for backing other political parties were being turned away immediately on arrival.

However, the villagers who speak to COTRAD stated that the distribution process which took almost two days was marred by disruptions and disputes as villagers staged a protest against Mr Jazi demanding the sitting Councillor Mr Dhemba to preside over the process. The villagers called for a nonpartisan distribution process since the seed was purchased through the taxpayer’s money. The act by the Zanu PF officials was described by villagers as a threat to social unity and peace.

COTRAD peace committee members for Masvingo ward 16 criticized the politicization of government aid as a major cause of conflict in rural areas. “Partisan distribution of resources is cancerous to social unity, peace and development, therefore we expect community members to respect leadership hierarchy and protocols in community development” said one peace committee member. As COTRAD we urge public officials to be ambassadors of peace and facilitators of development in a non-partisan manner.

Newer Post
Who will Guard the Guards?
Older Post
MDC has never staged an ‘illegal regime change’ in Zimbabwe