MDC has never staged an ‘illegal regime change’ in Zimbabwe

But it was ZANU PF itself – so why repress the opposition?

Source: MDC has never staged an ‘illegal regime change’ in Zimbabwe – The Zimbabwean 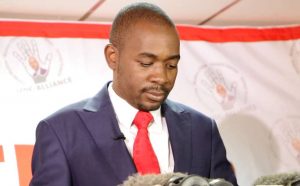 The gruesome events of yesterday (20 November 2019) in the Zimbabwe capital of Harare, whereby scores of innocent people – mainly bystanders – were reportedly brutally beaten up by police officers, outside the opposition Movement for Democratic Change (MDC) headquarters – where its president Nelson Chamisa was expected to deliver his ‘Hope for the Nation’ address – cast another dark shadow over the country’s already repulsive and unenviable human rights record – further affirming its ‘pariah state’ status.

These horrendous events, that are a huge embarrassment for the nation and people of Zimbabwe, only serve to enhace the distorted notion – which most of us have been tirelessly trying to dispel – that we, as Africans, are a savage primitive people, who can never rule themselves.

Otherwise, what other impression is portrayed by such barbaric acts as witnessed in Harare yesterday?

To make matters worse, this was not the first time – neither would it certainly be the last, since this brutish nature seems innately engraved in the ZANU PF government’s DNA – as such scenes have, unfortunately, become the hallmark of this administration since the country attained independence from British rule in 1980.

It has always been a huge mystery as to where those in power in Zimbabwe inherited such a bestial and bloodthirsty trait – because we have always been widely known as a peaceful, loving and gentle people. In fact, some have even characterised us a docile and pathetically submissive lot – a huge attraction for any psychotic despot.

As much as some have disingenuously attempted to place the blame squarely on our repressive and heinous colonial past, this has been, nonetheless, very unconvincing – as our erstwhile White oppressors never cannibalised or mauled their own kith and kin – yet, our Black ‘liberators’ have never seen any problems in brutalizing their own.

Since 1980, the ZANU PF government has gone the extra mile in breaking all the records in wickedness and atrocities – starting with the Gukurahundi genocide in the 1980s that led to the massacre of over 20,000 innocent men, women and children in the Matebeleland and Midlands provinces by the North Korean-trained military’s 5th Brigade, then frequent dubious fatal car accidents of those suspected of plotting against the ruling elite, and the murdering in cold-blood of hundreds of suspected MDC supporters in the 2000s (especially, after the humiliating defeat of then iron-fisted tyrant Robert Gabriel Mugabe by the opposition’s Morgan Richard Tsvangirai in the 2008 elections).

However, when Mugabe was ousted in a military coup d’etat by his own brethren in the ruling party and military in November 2017, the country’s grave human rights situation further deteriorated – as, within a space of only two years, at least 20 unarmed people (mostly innocent bystanders) were sadistically gunned down by security forces during riots on 1 August 2018 (against perceived electoral fraud after the 30 July harmonised elections), and in January 2019 (against fuel price increases).

Needless to say, not even one of the perpetrators was ever brought to book, in spite of recommendations by the Kgalema Motlanthe Commission of Inquiry instituted to probe the 1 August post-election violence.

However, countless people were arrested and imprisoned for allegedly engaging in, or inciting, these riots – including opposition MDC Members of Parliament (MPs) and local government councilors, as well as various activists – some of whom were eventually acquitted.

It is further reported that this year alone, over 50 cases of abductions, and threats on the lives of labour and political activists, have been recorded by human rights organisations, in addition to numerous other allegations of sexual abuse and beatings up of innocent people in their residential areas, and the arrests of various members of civil society perceived to be engaged in subversive anti-government activities (who have since also been found not guilty by the courts).

Since August this year, when the MDC sought to organise nationwide anti government marches, there has reportedly been a blanket ban on all its activities, including the holding of rallies and meetings – purportedly due to fears of an outbreak of violence.

Such was what the world witnessed yesterday, when scores of people (mainly bystanders) were brutally beaten up, as law enforcement agents tried to forcefully disperse those gathered at the MDC headquarters to listen to their president’s address – having had their planned meeting in a city centre park, the precious day, similarly banned.

However, all these inhumane, ruthless, and clearly disproportionate actions against perceived anti-government elements in the country are undoubtedly flagrant violations of Zimbabwe’s constitution as it unequivocally protects and guarantees the right to life, right to personal liberty, right to human dignity, right to personal security, freedom to peacefully demonstrate, freedom of assembly and association, freedom of conscience, freedom of expression, and political rights.

All of which have been wantonly bastardized, with impunity – effectively rendering Zimbabwe a de facto one-party dictatorship and police state, in stark contrast to its avowed claims to be a ‘unitary, democratic and sovereign republic’, as well as being founded on values and principles of ‘supremacy of the constitution ‘, ‘the rule of law’, ‘fundamental human rights and freedoms’, and ‘a multi-party democratic political system’.

If  such values and principles were genuinely to be adhered to, then all the tenets of the constitution had to be religiously followed – including the opposition being permitted to freely partake in their activities.

In fact, the role of law enforcement agents would had not been to ban the opposition’s events, but to ensure that they were conducted in a peaceful manner that also respected the rights of other citizens of the country – including the freedom of movement, property rights, and right to personal security.

However, issuing a blanket prohibition – purely based on speculation, and alleged previous violent activities – is nothing short of undemocratic and repressive. Everyone deserves the benefit of the doubt.

If anything, most of the violence that the world has witnessed emanate from Zimbabwe, in the past year, has not been at the instigation of the MDC, but has purely been at the hands of those supposed to maintain peace and security.

Even a released rape convict can not be banned from ever being anywhere near a woman!

After analysing all this, a potent question which then arises is: “Why is the Zimbabwe government afraid of the opposition, or any anti-government activities?”

The answer can seemingly be found in the numerous accusations levelled against the MDC by the administration and their allies – that the opposition party was working in cahoots with the United States of America (USA) and Britain to effect a so-called ‘illegal regime change’ – through instigating an uprising or revolt (in the mould of the Arab Spring) – by taking advantage of the prevailing strangulating economic problems that are suffocating the disgruntled majority of Zimbabweans.

The ZANU PF administration has repeatedly blamed this economic meltdown on so-called sanctions imposed by the USA and European Union (EU) in 2001 and 2002, which they allege were designed to cripple the country – as a result of the West’s infuriation with the government’s chaotic and murderous land reform program – in order to cause dissatisfaction amongst the population.

However, the opposition and rest of the nation are fully aware that these targeted measures were imposed on only 142 top officials and entities accused of committing human rights abuses, electoral fraud, and corruption – something that absolutely has no effect on the country’s economy at all.

The vast of majority of citizens actually believe that the government’s own incompetence, mismanagement, corruption, electoral fraud, and human right abuses are directly responsible for the catastrophic economic challenges bedevilling the nation.

If the truth be told, the MDC has never been proven to be either behind the imposition of these targeted sanctions, nor actively plotting some ‘illegal regime change’. If indeed they were, then the government has pathetically failed to prove its case. In fact, had the administration had concrete evidence, beyond any reasonable doubt, in this regard, they would have since charged the opposition party’s top officials with high treason, and lawfully banned the party.

Even Rhodesia premier Ian Douglas Smith did not hesitate to arrest senior nationalist leaders, and ban their parties in the 1960s and 70s, as they were viewed as engaged in subversive and terrorist activities.

However, the fact that the MDC has been permitted to operate and even run in elections since the imposition of the targeted measures as far back as 2001, is ample proof that the administration’s accusations are purely hogwash, and must be dismissed with the contempt they deserve.

That is why all that the ZANU PF government can do is proffer unsubstantiated and baseless reasons for stifling the MDC’s activities – nothing that can ever hold up in a competent court of law – thereby, effectively ‘banning’ the party through the back door.

There is no doubt that the Zimbabwe government is merely using such allegations as a smokescreen for its intolerance, and nightmarish fear of a rousing democratic defeat by the opposition.

If there was any entity in Zimbabwe that actually engaged in any ‘illegal regime change’, it was ZANU PF itself – with the assistance of the partisan military – when they staged a coup d’etat against then president Mugabe in November 2017 – as a result of vicious and brutal internal factional fighting within the party.

Therefore, there is absolutely no justification for the hideous crackdown on the MDC, under the pretext of preventing some plot to instigate an ‘illegal regime change’ – as the only ones who have effectively removed a sitting president, through the barrel of the gun, have been ZANU PF itself.