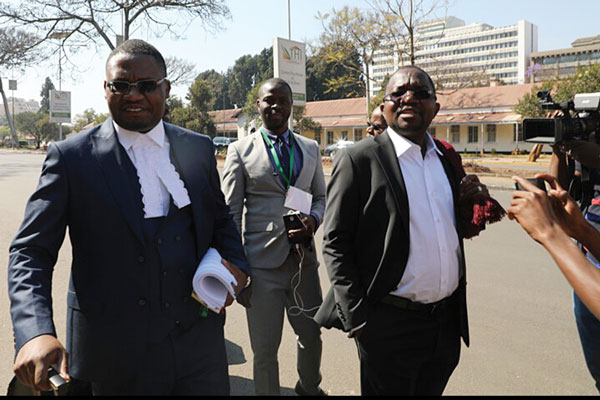 BY DESMOND CHINGARANDE
The person the police claim to be non-existent, forming the basis for the arrest of MDC Alliance lawyer, Advocate Thabani Mpofu, has been previously interviewed by the same police and gave 15 samples of his signature, the court heard yesterday.

Beatrice Mtetwa, Mpofu’s lawyer, revealed that the case has been investigated by the Law Society of Zimbabwe (LSZ) which has absolved him of wrongdoing after a Judicial Service Commission complaint.

Mpofu is also accused of concealing a transaction from a principal.

Mpofu appeared in court yesterday charged with forging an affidavit of “a non-existent” Simbarashe Zuze in a court case challenging the appointment of Prosecutor-General Kumbirai Hodzi last year.

He was granted $20 000 bail by Harare magistrate Munamato Mutevedzi and remanded to July 10. As part of his bail conditions, Mpofu was ordered to report at Highlands Police Station every Wednesday.

The State, represented by Michael Reza had opposed Mpofu’s bail, arguing he was a flight risk.

But Mtetwa said Mpofu would not abscond court because allegations against him were weak and that the LSZ, the professional body for local lawyers, had already cleared him of any wrongdoing.

Mtetwa said Zuze, who is being alleged to be non-existent had been interviewed by the police before where he gave 15 samples of his signature.

She also said the charge of concealing a transaction from a principal was a classic example of failure to understand the relationship between an instructing attorney and an advocate.

Mtetwa queried why the State never attempted to arrest Choice Damiso, who is Mpofu’s co-accused, despite her being at the police station where Mpofu was detained.

Mpofu is facing allegations of concealing a transaction from a principal. Samukange and Venturas Legal Practitioners is the complainant in the matter.

It is alleged that sometime in 2017, Senziwani Sikhosana, managing director of a local financial institution engaged Samukange and Venturas through his professional assistant, Everson Samukange to represent him in a civil matter.

Samukange and Venturas Legal Practitioners engaged Mpofu, as an advocate, to argue the case on their behalf. An instruction brief was entered into between Mpofu and the legal firm.

The State alleges that a few days later, Mpofu allegedly connived with Everson to divert the contract to their personal advantage. Mpofu did not disclose the transaction to Samukange and Venturas, it is alleged.

Everson is alleged to have received US$6 000 directly which he converted to his personal use, with the issue coming to light after an audit.

After his release, Mpofu said he would today appear before the Supreme Court to argue a case and thanked the people for showing solidarity with him.

“I want to talk about Zimbabweans, their spirit, some have been praying for me, others were beaten for me and I am very happy that they gave me that support, the lawyers and all the advocates who stood by me,” Mpofu said.

Addressing journalists on the sidelines of the court proceedings, MDC Alliance leader Nelson Chamisa said the Zanu PF government was running scared of the people and it was time to boot President Emmerson Mnangagwa out of power.

“This is a banana republic, so you can also see the banana conduct of Mr Mnangagwa,” Chamisa said.

“We never thought he could be worse than Mugabe, but he has proved Mugabe to be a toddler. He has really taken dictatorship to another level. And we will have to show Mr Mnangagwa the way that dictators are supposed to be shown, they have to exit people’s spaces,” Chamisa said.

The opposition leader said it was time for Sadc, African Union and the international community to intervene in the internal politics of Harare.

Meanwhile, MDC Alliance youth leader Obey Sithole,who was arrested for participating in a protest during the lockdown, was yesterday granted $1 000 bail by Harare magistrate Rumbidzai Mugwagwa.

Sithole was ordered to surrender his passport and report at Harare Central Police station twice a week.