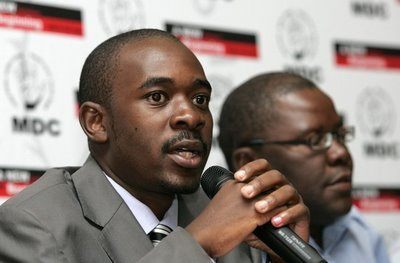 The secret negotiations, facilitated by a panel of eminent persons, are designed to ensure NPF and other key opposition parties throw their weight behind Chamisa in the general elections set for July 30.

The NPF has its roots in Zanu PF’s G40 faction which was fronted by former first lady Grace Mugabe, but has the ex-president’s support behind-the-scenes.

The NPF supported the MDC Alliance’s protest march in Harare on Tuesday demanding electoral reforms, and free and fair elections.

As part of the talks, one of the proposals being considered is that Chamisa, who has emerged as the strongest opposition candidate by support base and popular appeal, should be deputised by Mujuru and Khupe. Another proposal suggests that former minister and retired Brigadier-General Ambrose Mutinhiri and Khupe should be Chamisa’s deputies.

However, Mawarire denied any knowledge of the meeting, saying his party’s delegation was in South Africa to collect campaign material.

Negotiations for a grand opposition alliance were yesterday rocked by a dramatic development in which an NPF 39-member founding national executive committee meeting held at Stephen Margolis Resort in Waterfalls in Harare was disrupted by thugs who stormed the gathering to stop it. The meeting was later postponed to today at a different venue.

This came against a backdrop of stories swirling around that NPF was going to have a launch tomorrow at City Sports Centre in Harare to change leadership, with former Zanu PF national commissar Saviour Kasukuwere purportedly becoming the new leader replacing Mutinhiri.

Sources said some NPF officials had been going around saying Kasukuwere should replace Mutinhiri after a handful of party members held a meeting in Mashonaland Central province on Wednesday to amend the constitution and change the leadership. There was also a recent meeting held at a house in Borrowdale Brooke in Harare to discuss the issue.

Kasukuwere, who returned home recently after fleeing the country following an attack on his home by soldiers during last November’s military coup which toppled Mugabe, was a few weeks ago linked to rival project to destabilise the NPF. He denied the rumours and said he was coming back to pursue business and family interests, amid claims he had cut a deal with President Emmerson Mnangagwa’s administration to return on condition he sabotages NPF.

Kasukuwere’s name was again linked to the NPF chaos yesterday. He was, however, not available for comment. Previously he said such stories were “disinformation”.

Mawarire, NPF spokesperson, said his party was concerned with destabilisation activities blamed on Kasukuwere and the attendant divisive propaganda.

He said there was a fake letter circulating claiming his party would have a launch tomorrow when there was no such thing. Mawarire also dismissed stories Grace Mugabe wanted to take over the NPF leadership.

“We have seen the letter purportedly written by Cde Mutunhiri claiming we have a launch on Saturday. The fact is the NPF has no such launch. There is nothing like that. This is disinformation by comrades who recently came back to the country with a task by the junta to destabilise us in lieu for their freedom. Our founding national executive members’ meeting today (yesterday) was disrupted by hired and drunk thugs who came in two kombis,” Mawarire said.

“This is being coordinated by people angry on behalf of their handlers at our alliance synergies and the solidarity we showed to the MDC Alliance on Tuesday. But we will not allow this destabilisation strategy to succeed. It would be sad if Cde Kasukuwere is involved in this sinister plot because we abhor what the junta did to him when they sent soldiers at night to attack him at his home for merely participating in internal Zanu PF succession politics. So if he is involved it would be so ironic and cynical. Besides, we thought he said he is not an NPF member and has taken a sabbatical on politics.”
Repeated attempts last night to get a comment from Kasukuwere failed.

Despite NPF’s internal strife, alliance talks are continuing. The talks in South Africa were based on a 14-point discussion document, seen by the Zimbabwe Independent.

The document says it is important for the parties to make strategic decisions before the Nomination Court for the 2018 election sits on June 14. It claims there is clear evidence of popular support against the Mnangagwa regime, but there is need for a “political framework or structure to harness that support into an electorally cohesive political formation capable of winning the elections”.

The document notes “in broad terms, Zimbabwe’s political society is made up of two polarised main groupings whose political roots and leanings derive from the then Zanu PF which was led by Mugabe; and the then MDC which was led by the late Morgan Tsvangirai.”

“The polarised nature of Zimbabwe’s political society effectively means that Zanu PF supporters will not vote for MDC and, conversely, that MDC supporters will not vote for Zanu PF. This political stalemate, arising from the polarisation mentioned earlier, needs urgent attention to enable the supporters of the two parties to find each other and be given a political home which will enable them to vote together in common purpose in the forthcoming election,” it says.

“This would make the 2018 elections a referendum on the GNU through appropriate messaging on the applicable principles, ideology, government structure and composition thereof, and policy programmes. This messaging should include acknowledgment of the fact that whereas the 2009 to 2013 GNU was led by Zanu PF at the level of the presidency, the 2018 GNU should be led by MDC at the same level, given the prevailing balance of forces since the coup.”

The document says Chamisa and his party “will bring a considerable and strategic electoral base”, but there is a need for that base to be complemented by other leaders’ support and hopefully Mugabe’s residual social base in Zanu PF electoral strongholds of Mashonaland West, Mashonaland Central and Mashonaland East provinces.

“The proposed pre-and post-election GNUs would give these key electoral communities a strategic political home which will be critical in the election’s outcome,” it says.