MDC must wake up before it is too late 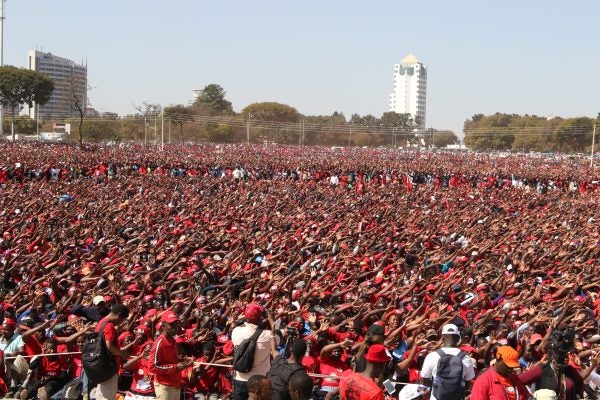 Reading through the biography of Chris Hani, one can’t help but notice the frustration that he went through during his days in exile in Zambia where the African National Congress (ANC) was preparing the Umkhonto weSizwe guerillas to be deployed to the front in South Africa.

The leadership seemed reluctant to deploy the energetic youths to the front, but let them starve in camps at times to death. This is one of the reasons, I am convinced, that delayed the liberation of South Africa from apartheid.

While the MDC’s time and circumstances are different as the party is not considering war or at war, it has an inescapable task of confronting this Zanu PF regime in the streets by using all constitutional and democratic means to stop the worsening economic situation facing the people before it’s too late.

The people look up to this movement as a real political alternative to Zanu PF. The masses stand ready for that call, which Nelson Chamisa pledged at the 2019 congress, saying he would lead the masses towards economic prosperity and reclaim their electoral victory stolen by Zanu PF.

The MDC seems either absent or is taking too long to take up the task.

The danger of the MDC procrastination to take to the streets is that it will frustrate Zimbabweans to a point of giving up on the movement and the unintended consequence is that it will  give Zanu PF a chance to reinvent itself through one of its factions. The Zanu PF youth league seems on track, doing something about corruption. Unfortunately, people know that more than weeding out corruption, the real motivation is a chance at the feeding trough.

We may not, in the distant future, find people thronging the streets celebrating this cosmetic changes with no value as Zanu PF projects itself as the saviour in the crisis that they have worked so hard to create for close to four decades.

One of the dangerous things to ever do as a political entity, is to create a vacuum in politics. A party must always be heard and seen to be in pursuit of providing answers to the desires of the constituency that it leads, especially in times of economic collapse and hardship.

The MDC must be at the forefront of exposing corruption in Zanu PF, the corruption that stinks to high heavens. The MDC’s silence is quite deafening and disappointing.

One would have expected the party to be leading the protests, going to the courts and approaching all other institutions that are established within our constitution to expose this corruption, but unfortunately the movement seems to be choosing silence while Zimbabweans are short-changed daily.

Now the architects of corruption and their offspring want to play Messiah to the evil they gave birth to.

Unemployment in the country is now estimated to be around 90%, the private sector is in intensive care, the public workers receiving insults as salaries for their loyal service to the country, while the politically connected and dealers contributing nothing to the national purse are drowning in riches — this surely must inspire the movement that was born out of workers’ struggles to take the lead and liberate the workers from this exploitation.

The glorious movement of Morgan Tsvangirai and Gibson Sibanda must find its voice, it must take leadership in this struggle, and since the people voted for it overwhelmingly, it cannot abdicate the responsibility to lead from the front.

This silent movement is not the one that Fletcher Dulini-Ncube and Isaac Matongo were prepared to lay their lives for, Susan Tsvangirai and Zodwa Sibanda must be turning in their graves seeing this silence — silence that may be mistaken for complicity and complacency.

The party must learn from history. Not long ago Evan Mawarire almost took away the thunder and had it not been for his own blunders, it could have been another story. In January this year a demonstration that was initiated by unknown forces almost took people to total freedom, but sadly lives were lost as the regime crushed the people’s voice with military might, but the lesson from history is force doesn’t last forever.

My submission is that the MDC must wake up, it must not at this point be seen not to be doing anything about this national crisis, the people are so tired of Zanu PF and their desperation to get out of the chaos can be seen on their faces. The MDC has a duty to lead, before either a third force emerges or Zanu PF, for their own greed, reinvent themselves and delay the people’s victory.