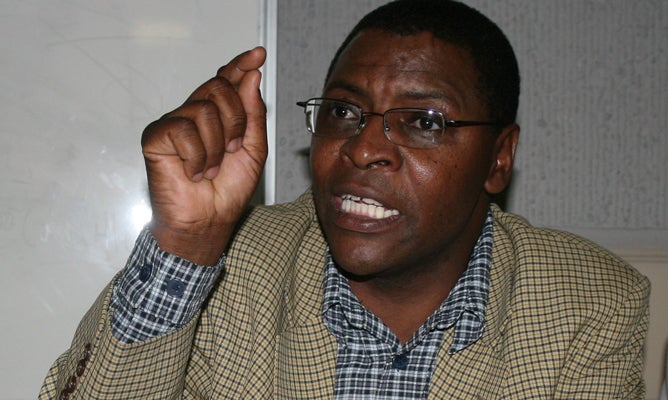 Letter from America with KENNETH MUFUKA

I was attending a pre-conference of Christian pastors in Masvingo at the urgent invitation of Prophetess Elizabeth Chademana.

I had been charged by the saints in Greenwood District of the United Methodist Church, South Carolina, to carry a message of comfort.

Little did I know that the country itself was going through a massive economic re-alignment exacerbated by the re-introduction of the Zimbabwe dollar (Zim dollar).

This is the background of my engagement with Professor Welshman Ncube, one of the sharpest minds in Zimbabwe today and a vice-president of the opposition Movement for Democratic Change (MDC).

I could hear a voice saying to me: “Ken, you must write.”

In August 2018, Finance minister Mthuli Ncube said: “What I would argue now is we have to remove the bond notes currency, which is becoming a surrogate Zimbabwe dollar, but without the macro-economic credibility to support it. (It) should be removed because it is bad money…and bad money drives out good money.”

The MDC leader retraces his steps to Thabo Mbeki’s observation that Zimbabwe’s problems are so deep-rooted, massive and go a long way back into Robert Mugabe’s regime that maximum national unity and effort are required to solve them.”

These historical events — the Congo war, Black Friday when the Zimbabwe dollar lost 45% of its value after the unplanned award of $5 000 gratuity pension each to war veterans, unplanned land reform and recurrent violence and corruption — have shattered Zimbabwean confidence in the legitimacy of government.

I suggested to the learned professor that perhaps the word “trust” would be less harsh.

He brushed my suggestion aside. “Every decision government has made, since Gideon Gono’s billion dollar bearer cheques, seemed clever at the time, but they offered temporary solutions, and further destroyed public confidence.”

Meanwhile, neither chambers of commerce nor opinion makers like Eddie Cross and Hopewell Chin’ono have been taken into their confidence. Cross, who had met the
Finance minister earlier, was taken by surprise by the announcement.

The Zim dollars themselves are yet to be manufactured. Common sense and a sense of fairness would have required extensive consultations and an information blitz before the introduction.

But there is another issue at hand. Tobacco farmers were promised half their payments in foreign currency. That is now moot, but they were not consulted.

While government may actually steal (taking away without permission of owner) diasporans’ foreign currencies, these will dwindle within a month. New avenues of sending money to Zimbabwe involve agreements with Asian merchants with families abroad to supply family needs in Zimbabwe while payments are deposited abroad.

The deputy MDC leader is, to my mind, correct in arguing that this is the worst way of cultivating trust.

Professor Jonathan Moyo has pointed out that the present leaders are not up to date with world trends and information, because of their unwillingness to read widely or to keep up with current trends.

There is a general idea that merchants charging in local dollars were exploitative, a recurrent theme of the Gono voodoo economics. Since the de-coupling of the Zim dollar from the US dollar, hotels at Victoria Falls were charging in US$ or in Zim dollars at 10 times the US$ quotation. Thus a one-night booking at
A’Zambezi Motel, at US$160 would cost a Zimbabwean Z$1 600.

There is no exploitation there, as the hotels are taking risks with the Zim dollar, while the US$ maintains value.

After my interview with the MDC deputy leader, I wanted to find out from other players how they viewed the economic situation. William S, of William S and G (an energy company), a makulu white man who has worked with the ministry of energy for donkey years, told me that since independence, no new power plant has
been successfully brought into operation.

In fact, power stations like Munyati and Mutare City power stations have been half operational or completely dismantled and disappeared into thin air. This, he said, was due to arrogance on the part of young stalwarts, who had just come out of graduate school. But corruption played a part as well, when an emergency seven- ton generator disappeared from Harare airport without a trace. Those who had eyes to see pretended to be blind.

But the makulu white man told me some juicy stories which raised my kinky hair. He “alleged” that some “guys” running around with titles of “engineer” never went to engineering school or never engineered anything before their appointment.

Their virtue lay in being political stalwarts and in their contempt of makulu white engineers who had made Rhodesia’s energy field the pride of Central Africa.

The Finance minister argued in 2018 that the Zim dollar would, in due course, be returned after fundamentals are in place. As it was, there was no macro-stability to support the Zimbabwe dollar, he said.

Any cursory journey into an OK Supermarket will reveal that even tomato ketchup, potato chips, rice, cooking oil are all imported.

The great potato chips, once made by Willards with a taste borrowed from heaven, are no longer there.

Cairns Foods which once surrogated for Heinz Products is now a shell of its former self. We are even short of maize, from a land once the breadbasket of Central Africa. Unemployment has soared to 90%. Tobacco production has not been of sterling quality this year.

When I consulted my doctor about my trip to Zimbabwe, these were his words: “Do not drink their water. Do not eat their food. Do not eat food from the street vendors. Do not go to the Zambezi. There is malaria and typhoid. Do not go to their hospitals. They are death beds. They have no medicines.”

Surely these are the fundamentals. The Finance minister has not made his point.

Newer Post
How do you make choices at life’s crossroads?
Older Post
MDC must wake up before it is too late