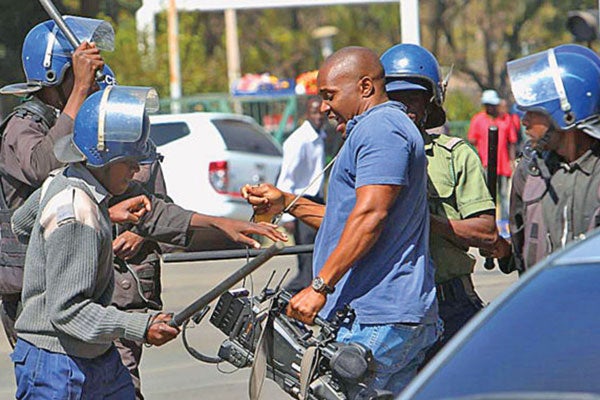 ZIMBABWE’S 2018 elections, coming on the backdrop of the ouster of former president Robert Mugabe in November 2017, were held amid great expectations of a new era that would spur the country’s socio-economic development in a concomitantly open and free democratic space.

These expectations were underpinned through pledges by President Emmerson Mnangagwa’s newly-elected government to undertake requisite economic and political reforms to unlock international foreign direct investment as enunciated through his “Zimbabwe is open for business” mantra. Media policy and law reforms were among the key reforms critical to steering the Zimbabwean ship in the right direction and retaining its pride of place in the international community.

It is against these expectations that the Ministry of Information, Publicity and Broadcasting Services, led by Monica Mutsvangwa, in November 2018, held consultative meetings with key media stakeholders to get input into the form and shape the envisaged reforms would take.

Resultantly, the government conceded to the unbundling of the discredited Access to Information and Protection of Privacy Act (Aippa) through the gazetting of the Freedom of Information Bill and the Zimbabwe Media Commission Bill. The Broadcasting Services Act, was also lined up for similar reconstruction through the Broadcasting Services Amendment Bill.

However, as 2019 came to a close, more than a year after the July 2018 elections, government’s sincerity in undertaking the envisaged democratic reforms became increasingly questionable.

While the government has since gazetted the Freedom of Information Bill and the Zimbabwe Media Commission Bill, it is regrettable that the two Bills were generally viewed as a far cry from meeting the country’s constitutional yardsticks as envisaged under Sections 61 and 62 of the constitution which guarantees freedom of expression, media freedom and access to information.

The government’s lethargic, if not lacklustre approach, in implementing genuine democratic reforms is thus cause for great concern.This should be viewed on the backdrop of the resuscitation of the repressive Public Order and Security Act (Posa) — albeit under a new name — the Maintenance of Order and Peace Act (Mopa), but with the retention, if not tightening of Posa’s draconian provisions.

Inevitably, several journalists were caught in the crossfire of the government’s crackdowns against constitutionally guaranteed rights to media freedom, freedom of expression, assembly and association. In that regard, the operational environment and democratic space remained volatile, uncertain and unpredictable.

Given the foregoing, Zimbabwe was thus back to the pre-Government of National Unity (GNU) 2007-2008 status quo ante characterised by socio-economic political instability and contested presidential election results, triggering incessant calls for political dialogue and implementation of fundamental reforms.

This scenario, notwithstanding the temporary relief ushered by the GNU (2009–2013), was back to haunt the country yet again despite Mnangagwa’s pledges to usher socio-economic and political stability hinged on strengthening Zimbabwe’s institutions of democracy.

It is trite to note that the foregoing developments came in the wake of brutal clampdowns on opposition MDC Alliance demonstrations, reported abductions and torture of human rights activists and political players allegedly by the police and State actors.

These repressive actions were undoubtedly aimed at containing an increasingly restive population squirming under worsening economic hardships and impoverishment characterised by power outages of up to 20 hours, company closures, high unemployment, shortages of foreign/local currency, fuel and water, endemic corruption and soaring prices of basic commodities and services.

During the year under review, inflation spiked from under 1% in 2017 to more than 400% in October 2019, triggering fears of a return to the 2007-2008 hyperinflationary period. The economy was thus projected to shrink by 7% according to the International Monetary Fund at a time when an estimated 8 million Zimbabweans are facing hunger and in need of food aid and the worst drought since 1992.

On May 20, 2019 permanent secretary in the Ministry of Information, Nick Mangwana, held a progress update meeting on the media law reform process.
The meeting provided an opportunity to discuss other media related issues such as licensing of community radio stations, appointment of the Broadcasting Authority of Zimbabwe’s board, as well as progress on Zimbabwe’s migration to digital broadcasting.

The Zimbabwe government has so far based its media law reform process on the repeal of Aippa. This law currently regulates three broad areas of law namely, access to information, data protection and regulation of the media industry.

This came after government conceded to breaking Aippa into three Bills, i.e. the Freedom of Information Bill, Protection of Personal Information Bill and Zimbabwe Media Commission Bill. The Broadcasting Services Act was also to be duly amended.

However, as the year 2019 came to an end, no timelines or indications were given on when and whether other statutory provisions that restrict media freedom would actually be reviewed and amended or repealed. Contrary to popular belief, it is the Criminal Law (Codification and Reform) Act that has generally been used to violate free expression and media freedom in Zimbabwe, when compared with Aippa.

Crimes found in the Criminal Law Code such as the publishing or communicating false statements prejudicial to the State, or undermining the authority of the President, have been used to punish offenders for publication of information that portrays the state or president in an unflattering manner.

Suffice to say laws such as the discredited Aippa, used to licence and regulate the media; the Official Secrets Act (OSA), to broadly embargo information held by public bodies and the Broadcasting Services Act, to hinder free establishment of private radio stations, remained entrenched in the country’s statutes.
Other restrictive laws include the Censorship and Entertainment Controls Act, and the Criminal Law (Codification and Reform) Act. This should also be viewed against the government’s accelerated efforts to introduce the cybercrime laws, generally perceived as intended to curb free speech online.

For instance, more than 30 Harare-based journalists on April 8, 2019 petitioned the Zimbabwe Republic Police following the firing of teargas canisters by the police into the offices of online publication 263Chat in Harare on April 4, 2019.

The journalists marched to Harare Central Police Station where they were initially barred from entering the premises by heavily armed police officers. The officers confiscated and tore the placards they were holding.

However, after an initial standoff, they were then allowed to enter the police station where they presented their petition to Chief Superintendent Simba Chagu. Chagu then addressed the journalists and told them they had contravened sections of the then Public Order and Security Act by failing to notify the police about their intention to deliver the petition before dismissing them.

Earlier, the journalists had marched from the Media Centre to Town House where they were addressed by Harare Mayor Herbert Gomba upon presentation of the same petition. The mayor said the city council had instituted an investigation into the incident.

“A police report (following the incident) was lodged and visual evidence of the attackers is available to assist the police in their investigations of this matter. To our knowledge, no arrests had been effected at the time of the submission of this petition to your esteemed offices,” read part of the petition.
“Media practitioners have a right to cover current affairs such as police operations against vendors in a public space. The only limitation being that such media coverage should not interfere with the ongoing police operation.”

The journalists condemned the firing of teargas canisters into the occupied offices of 263Chat as unwarranted and unjustified.

“We, therefore, urge you to conduct thorough investigations into this shocking incident as a matter of urgency and thus assure the safety and security of journalists undertaking their lawful professional duties as provided for by the constitution,” the petition read.

The incident happened on April 4, 2019 during a joint operation against vendors by police and Harare municipal police officers in the central business district.

Such violations of media freedom impose greater urgency and the requisite political will on the need for comprehensive media law and policy reforms. These reforms should not only be restricted to the media and information industry, but also include wholesale political and economic policy shifts in line with the constitution, which are critical to unlocking both domestic and foreign direct investment.

Government/parliament should prioritise the urgency and necessity of democratic reforms by ensuring gazetted bills such as the Freedom of Information Bill and Zimbabwe Media Commission Bill and the proposed Protection of Personal Information Bill and Broadcasting Services Amendment Bill are fine-tuned and in sync with the Constitution and regional and international principles.

The media reform agenda should be expanded and be far-reaching in as far as the laws that affect the enjoyment of the rights to privacy, freedom of the media, free expression and access to information are concerned.

The proposed cybercrimes and security laws should be formulated and crafted in sync with national and regional principles that protect privacy of communication, and the right of all citizens to freedom of expression, media freedom and access to information.

The police should investigate cases involving the assault, harassment or unlawful arrests of journalists conducting their lawful professional duties for purposes of prosecuting the offenders to reduce and minimise impunity for crimes against journalists.

The government, police and political parties, among others, should issue statements condemning media freedom violations with clear warnings to perpetrators on the ramifications of these criminal transgressions.

The media and police should revisit and implement the resolutions and action plans agreed to in December 2017. These action plans are aimed at improving the professional working relationship between the media and the police

The media should at all times conduct its duties in a professional manner as guided by the ethics and codes of the profession.

Increase and maintain pressure on the urgent need for transformation of the Zimbabwe Broadcasting Corporation (ZBC) into a truly independent public broadcaster.

Transparency in the regulation and envisaged licensing of community radio stations. Resuscitation of the Zimbabwe Mass Media Trust (ZMTT) to curb government interference with the editorial independence of public media such as Zimpapers.

The media-operating environment in 2019 was far from the ideal when measured against the government’s compliance with constitutional guarantees to media freedom, free expression and citizens’ right to access to information.

This is despite pledges by the new government to break with the past, which was characterised by unlawful arrests, assaults and harassment of journalists conducting their constitutionally guaranteed professional duties.

In 2019, we continued to witness cases involving the assaults or unlawful arrests of journalists that were perpetrated by the police — the very same agents that are supposed to protect journalists and the citizens in general.

The state should therefore take the lead in fulfilling its constitutional obligations of guaranteeing the safety and security of journalists, media workers and other content creators as they exercise their right to media freedom and freedom of expression.

This will go a long way in entrenching media freedom and citizens’ right to free expression and access to information as provided for by the country’s Constitution and other regional and international instruments that the country is party to.

Misa-Zimbabwe is one of 11 chapters of Misa, which promotes and defends media freedom and freedom of expression across the Sadc region. It is an independent membership-based organisation.