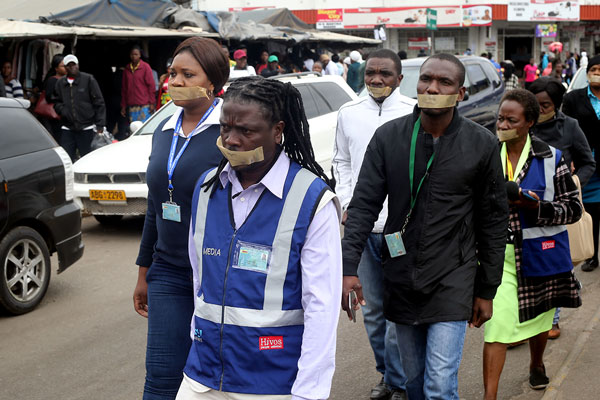 A VIBRANT and critical media is the hallmark of any democratic society.

To achieve its fundamental watchdog role of holding those in power accountable, providing reliable information to the public and facilitating debate among citizens on issues of public importance, including democratic processes, the State must uphold and guarantee freedom of expression and access to information which enable journalists to do their work.

However, the landscape and operational environment for the media in southern Africa has been characterised by upheavals, accentuated by the COVID-19 pandemic and the advent of the digital age, which have threatened the viability and sustainability of the media.

Many of the countries still have obsolete legal and policy frameworks that unnecessarily hinder the work of journalists and media practitioners, despite having constitutional guarantees on freedom of expression, media freedom and access to information.

This has further been worsened by physical and verbal attacks, harassment and assault of journalists and in some cases raiding of media houses.

The regional report on the state of Press freedom in southern Africa looks at media violations, the state of gender media and digital rights in the region among other topics.

There have been several attempts by governments in Africa to regulate or censor the internet space.

The law, more so the legislative wheel, has been relied on as a vehicle to impede the exercise of rights online.

Countries in southern Africa have relied on both old and current legislation and also new laws to regulate enjoyment of digital rights. For instance, in Zimbabwe, the government has relied on laws like the Criminal Law Codification and Reform Act (Code) to inhibit the exercise of freedom of expression online. The specific provisions that have been notorious include section 22(2)(a)(iii) on subverting a constitutional government.

Similarly, in Zambia such provisions exist in the Penal Code. The Penal Code grants the President absolute discretion to ban publications regarded as contrary to public interest and also the criminalisation of publication of false news with intent to cause fear and alarm. These provisions from both Zimbabwe and Zambia infringe on media freedom and freedom of expression especially the capacity by individuals to demand transparency and accountability.

These also prevent the citizens from criticising the government or the president yet the capacity to do that is what forms the basic tenets of democracy.

Apart from the aforementioned cultural and gendered norms that limit women’s access to mobile technology and the internet, in instances where some women have that access, their exercise of digital rights is further hampered by online gender-based violence through hate speech and cyber-bullying.

A recent Plan International survey of over 14 000 young women and girls established that 58% of respondents had experienced online harassment, including abusive language and cyberbullying.

And research by the Web Foundation and the World Association of Girl Guides and Girl Scouts found that 84% of young women think the problem of online abuse is getting worse.

A 2020 survey by Women at Web indicated that in Tanzania 70% of women suffer from mental stress and anxiety due to online violence. This, therefore, clearly shows how online violence towards women is infringing on their freedom of expression online for fear of being victimised.

This report has elaborated the state of digital rights in southern Africa particularly the entrenched factors that continue to infringe on the exercise of these rights.

Governments also have a key task to play with regards to evaluating the existing legislative provisions, which need to be informed by set international standards and best practices towards the promotion of digital rights, especially freedom of expression and the right to privacy.

A multi-stakeholder approach to internet governance is the basis for the creation of an optimum environment for the exercise of digital rights.