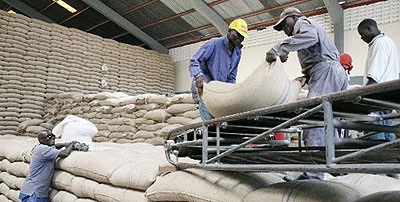 HARARE – Grain Millers Association of Zimbabwe (Gmaz) has given producers
of packaging materials up to the end of the week to come up with a
reasonable pricing that will be fair to both consumers and suppliers.

In some supermarkets, a 10kg packet of maize meal which was going for
$5,50 has significantly increased to between $9 and $9,20 as of yesterday
– an increase of more than 80 percent.

Yesterday, Gmaz called for a meeting with the manufacturers after they
“unilaterally” increased the prices of their packaging, which created the
ripple effect currently obtaining on the market and in particular the
increase of maize meal.

Gmaz chairperson Tafadzwa Musarara, told journalists soon after the
meeting that they had given the manufacturers a deadline for weekend.

“Yes, the price of maize meal has gone up on the account of packaging,
hence we had a heated debate on the issues relating to the cost of
packaging.

“We sell the commodity which is deemed a human right, food…and if our
costs are starting to be foreign currency denominated, it makes it
difficult for us to sell the products because we can’t sell maize meal to
low income households and demanding part of payment in foreign currency,
we are not going to do that,” said Musarara.

He said every year government was investing more than $200 million to
subsidise the import of maize in order to make it available and affordable
for ordinary people.

The Gmaz chairperson said the price increases were made without proper
consultations and urged Reserve Bank of Zimbabwe must make follow ups on
the foreign currency allocations being made to producers and see how the
money is being used.

“So at least today, we have spoken and we expect them (manufacturers) to
come back to us by end of this week,” he said, further stating that they
are ready for any engagements.

Speaking at the same press briefing, Agriculture deputy minister Vangelis
Haritatos, who was also part of the meeting, said government had no
intention of introducing price controls.

“As government we have no intention of setting any price controls
whatsoever. Our position is very clear, we want you as the sector to
engage each other and come up with the best position possible, but the
best possible position must be a practicable position, something that is
affordable to consumers out there. You have to understand that you are
dealing with food and it is a critical component in our lives, so again we
commend you and we commend the grain millers’ initiative to actually call
the packaging companies to order,” Haritatos said, adding that the
initiative was a noble idea.

The meeting came after Gmaz raised alarm on Monday over the pricing of
packaging material, which increased by over 500 percent.

In a statement, Gmaz general manager Lynette Veremu, said if the prices
for the packaging material was not reviewed downwards, it would increase
the milling industry products.

“Not only have they increased the prices by – in some instances 700
percent – but they are also demanding their payments in foreign currency
and this is the reason why we have arranged this meeting with them so that
we deliberate on the implications to consumers,” Veremu said.

According to Gmaz, polypropylene which was initially being sold at $1,34
in bond note or RTGS is now US$2,76, while laminating plastic which was $2
per 5kg is now costing $6 per kg.