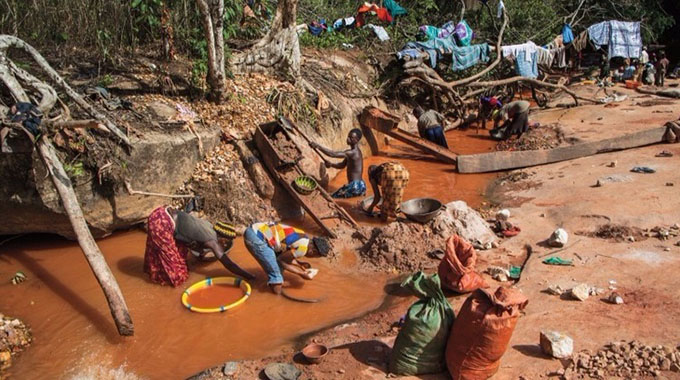 Ishemunyoro Chingwere Business Reporter
Small-scale miners under the Zimbabwe Miners Federation (ZMF), have welcomed Government’s initiatives in the mining sector that they say are set to transform the small scale mining industry as well as improve individual miners’ livelihoods.

Government on Tuesday announced that it will roll-out a number of programmes tailor made for the small scale mining industry with gold centres being the major development.

One such centre being implemented on a pilot scheme has been set for Bubi in Matabeleland North and will provide milling and other services critical to gold mining.

Government is also negotiating with a Chinese company, Tsingshan, for the establishment of a stainless steel plant to beneficiate ferrochrome most of which is mined by small scale miners.

Ms Rushwaya said such efforts were important steps towards the realisation of upper middle income status for the country by the year 2030 as enunciated by President Mnangagwa.

Ms Rushwaya told Minister Chitando, who is also the federation’s patron that ZMF will not partake in activism and opposing Government programmes as miners stand to benefit more by participating and corroborating with the state.

“As a federation, we are not a lobby group that is there to go against Government wishes and ethos. This will be evident in our programmes amongst them where we are rallying in reclaiming all the land on which we would have worked on and this is very important for our environment,” said Ms Rushwaya.

“On the issue to do with Zimbabwe being an upper middle income economy by the year 2030, we are here to save, we need to make sure that the 100 000 tonnes of gold per year that Government so wishes to realise will be realised mostly through our efforts.

“Such initiatives (by Government) will also help in uplifting small scale miners and we hope this will not end in the gold sector alone, but will be rolled out to all other minerals in which artisanal miners are partaking in,” she said.

In June Government also signed a 20 year mining deal with the Moti Group and its local partners, Sakunda Holdings, which is also meant to capacitate small-scale miners.

The deal, known as the Zimbabwe Motivation Mining (ZMM), will see the investor availing a $50 million off take that will go towards small scale miners’ operations.