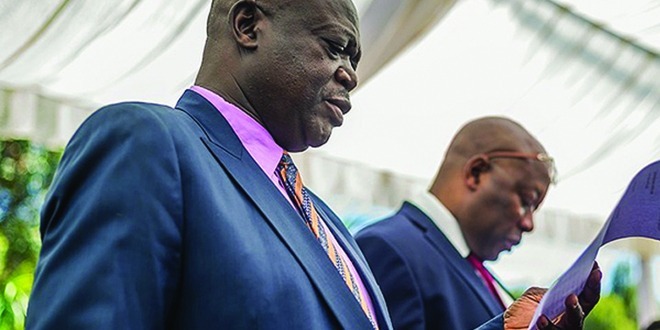 THE Parliamentary Committee on Agriculture has threatened to charge Manicaland Provincial Affairs minister Ellen Gwaradzimba with contempt of Parliament for providing contradictory statements over land invasion in Chipinge where her son has been implicated.

She appeared before the Justice Mayor Wadyajena-led committee yesterday to answer questions regarding the land deals in Chipinge where the committee threatened to charge her for lying under oath.

Wadyajena insisted that the approval by Shiri was based on false information Gwaradzimba had given him.

It has emerged that she claimed the Manicaland provincial lands committee recommended her son’s land grab when in fact the committee had not met.

Gwaradzimba submitted a dossier to the committee purporting that it was hers, but later admitted that it was prepared by her son.

“What you are saying and what we have from this document is inconsistent. The document that you now say was prepared by Mbudzana although you gave it to us as yours, shows that he never applied for land in 2014 like you indicated,” Wadyajena said.

“I think I have to recuse myself because this committee must charge you for misleading us and I don’t want to be doing it myself…it must come from the committee.”

But Gwaradzimba responded: “Can I submit my evidence without making reference to Mbudzana’s document because there is no invasion that ever happened, even the farm owner admitted in the government-owned Press that his farm was not invaded”

Wadyajena fired back: “Minister, you are making our lives difficult. We want evidence that the provincial lands committee met to offer the land to Mbudzana, not media reports. I am adjourning this committee out of respect to allow you to go back to Manicaland and come back with evidence.”

Gwaradzimba said her responsibility was to identify and make recommendations and the issuing authority was the one to decide whether to allocate a piece of land or not.

“I did not mislead you; this is exactly what he (Shiri) advised me to do. Mind you, I was still very new in the office and I was not yet familiar with procedures, so this is what he told me, to write a recommendation letter and forward the necessary documentation.”

Gwaradzimba, however, denied any wrongdoing, claiming she acted on Shiri’s orders.

She has previously been accused of attempting to grab a multi-million dollar export-quality fruit producing farm from Chipinge farmer Richard Le Vieux and was only blocked from doing so by Cabinet.

Gwaradzimba’s son was also accused of trying to force partnerships with lucrative farmers by threatening to grab their land if they refused to co-operate.