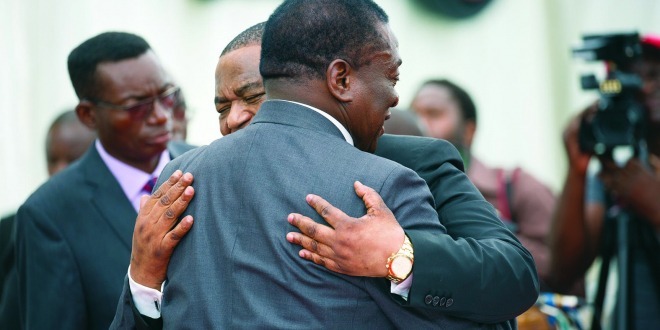 UNDERLYING tensions between President Emmerson Mnangagwa and top military commanders this week publicly exploded in the aftermath of the chaotic and hotly-disputed Zanu PF primary elections which left senior party officials and members warning of a gathering storm of defeat on the horizon at the upcoming general elections
Mnangagwa and the former Zimbabwe Defence Forces commander, retired General Vice-President Constantino Chiwenga are fighting for the heart and soul of Zanu PF and control of the levers of state power. 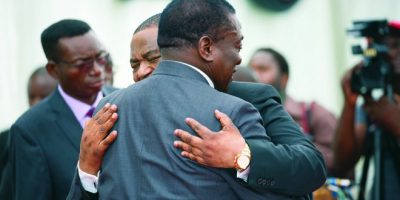 Mnangagwa was catapulted to power by the military, while Chiwenga, who is also in charge of the Defence and War Veterans ministries, rose to the position of vice-president in the aftermath of the military coup which ousted former president Robert Mugabe last November. Soon after the coup, differences emerged over a series of issues: type of transitional arrangement, positions, appointments, Mnangagwa’s tenure and control of the levers of state power.

In the chaotic primary elections this week run by the military, many of Mnangagwa’s key allies were defeated amid internal manoeuvres by the army to consolidate their grip on the party and related political and electoral processes. This angered Mnangagwa’s political allies who fumed that military commanders in charge were political novices, hence the disastrous primaries.

Mutsvangwa and Rugeje now personify the battle between senior civilian and top military leaders in Zanu PF and government.

Mutsvangwa also warned Mnangagwa could lose the critical general elections because of the primaries fiasco.
Some of Mnangagwa’s allies who fell dramatically in the primaries between April 29 and May 1 include Mutsvangwa, Minister of State in the President’s Office responsible for National Scholarships Christopher Mushohwe, Zanu PF deputy secretary for legal affairs Paul Mangwana and the party’s deputy secretary for Youth Affairs Lewis Matutu.
Samuel Mumbengegwi, David Chapfika, Andrew Langa, Abednico Ncube, Douglas Mombeshora and Edgar Mbwembwe are among the bigwigs who also lost. They cited irregularities, chaos and fraud for their defeat.

As previously reported by the Zimbabwe Independent in February, tensions have been gradually intensifying between Mnangagwa and the military clique surrounding him, amid revelations of the army’s overbearing influence on the executive.

Official sources say the military is even exercising veto power in some instances, while also overly influencing government and state institutions operations.

This week, the fight manifested itself publicly over the deployment of police in Zanu PF primaries. It later emerged the army had unconstitutionally and unilaterally deployed police without Mnangagwa’s knowledge and authority. This has widened the rift between the executive and military.

Evidence of the escalating infighting is now awash in the public domain. Mnangagwa has distanced himself from abuse of police and slammed that, effectively calling out the military.

The use of the military, police and other security officers was exposed when Rugeje’s Zanu PF commissariat deployment plan for the primary elections leaked. The plan reveals heavy presence in the primaries of the military and those with security background who were deployed as heads of the 10 provinces.

Rugeje’s plan stated that each polling sub-team at a polling point would comprise two police officers, one inside the polling station in charge of security and another outside manning the voting room.

Zanu PF has always used the army and state security agencies for elections, but now the difference is that the military is openly in charge.

In June 2013, the Independent reported that security service chiefs, under the banner of the Joint Operations Command (Joc), which brings together army, police and intelligence bosses, ran Zanu PF’s election campaigns.
Muchena and Nyanhungo were embedded in the Zanu PF commissariat department. In 2008 all provinces were under the control and direction of senior army commanders after Mugabe lost the first round of polling to the late MDC-T leader Morgan Tsvangirai who was later forced to withdraw from the presidential election run-off due to a vicious military campaign of violence and brutality.

Mnangagwa this week pushed back against the military, warning the abuse of state security apparatus would not be tolerated.

“The President in his capacity as both leader and of a political party and head of government wishes to make it abundantly clear to all and sundry that it is neither the policy of Zanu PF nor the direction of government, through him, to deploy the police or any arm of the security establishment in helping with any party function, list (least) of all as presiding or returning officers in party primary elections,” Mnangagwa said.

“Any such instances, which might have occurred in the just-ended party primary elections would amount to a breach of Zanu PF policy and certainly a flagrant violation of the laws of the land which must be roundly condemned and stopped forthwith.

“Any officials of the party or officers of the security establishment caught abusing arms and personnel of security as alleged will be dealt with severely.”

Section 208 of the constitution states that “neither the security services nor any of their members may in the exercise of their functions act in a partisan manner, further the interests of any political party or cause or violate the fundamental rights or freedoms of any person”.

It also says: “Members of the security services must not be active members or office bearers of any political party or organisations.”

Mutsvangwa yesterday wrote a scathing letter to Rugeje over the issue, escalating the fight.

“This letter is further to my cellphone call of May 2 2018 to you Engelbert Rugeje, National Political Commissar, advising you that I was withdrawing from the polls. I unreservedly reject the results of the just held Zanu PF party polling in Norton. I also refuse to accept your announcement of Langton Mutendereki as the winner. The main reason being the unconstitutional use of the Zimbabwe Republic Police, a state agency as election returning agents,” the letter reads.

“These policemen were principal players in uninhibited rigging as well as wholesale denial of the act of voting to legions of bona fide party members.”

Sources said Mnangagwa was forced to change his administration deployments under military pressure as initially he preferred appointing Kembo Mohadi as vice-president in charge of Defence, Security and War Veterans. The sources also said Mnangagwa also had plans to appoint Oppah Muchinguri as a vice-president ahead of Chiwenga, but this was blocked by the army.

The Defence and War Veterans portfolios were later seized from Mohadi and given to Chiwenga, while Mnangagwa became in charge of security; the CIO, demonstrating a fight over the control of the levers of state power and the future trajectory.