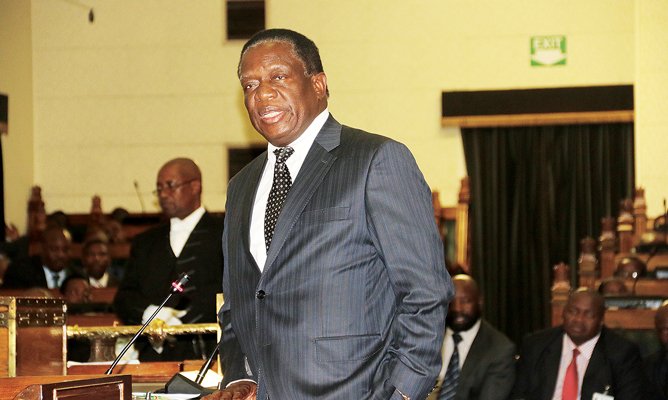 VICE-PRESIDENTS Constantino Chiwenga and Kembo Mohadi yesterday took the oath of office at a time President Emmerson Mnangagwa is facing a litmus test over the calibre of ministers who will constitute his new cabinet.

Mnangagwa is also under scrutiny over whether or not he will unconstitutionally retain Chiwenga as minister of Defence and War Veterans. Chiwenga was Commander of the Zimbabwe Defence Forces when the military orchestrated a military coup which toppled former president Robert Mugabe in November last year, catapulting Mnangagwa into power.

Mnangagwa rewarded Chiwenga by appointing him as one of his deputies as well as Defence minister. However, the move courted criticism as it violated section 215 of the Constitution which states that the President must appoint a minister — not a Vice-President — to preside over the Defence portfolio.

Analysts this week said the reappointment of Chiwenga as Defence minister would be interpreted to mean he has an overbearing influence over Mnangagwa.

Presidential spokesperson George Charamba yesterday told the Zimbabwe Independent that he was not qualified to comment on whether Mnangagwa would retain Chiwenga as Defence minister.

“You are aware that cabinet is the prerogative of the president and that I am a mere permanent secretary. Please do not ask me to engage on issues celestial when I am a mere mortal,” Charamba said.

Despite helping to ensure Mnangagwa attains the presidency, tension has been gradually intensifying between Mnangagwa and the military clique surrounding him, amid revelations that the soldiers enjoy massive leverage over the executive.

Zanu PF insiders have told the Independent that Mnangagwa and Chiwenga are fighting for the heart and soul of Zanu PF and to control the levers of state power.
Mnangagwa, whose slim victory in the July 30 elections was upheld by the Constitutional Court (ConCourt), also faces the unenviable task of picking ministers from a pool of Zanu PF legislators with a history tainted with corruption and incompetence, while some are presiding over poorly-performing corporates.
\
A government source said Mnangagwa was likely to appoint “younger cabinet ministers in some ministries but retain the old guard in security and agriculture ministries to reassure war veterans while consolidating the gains of agrarian reform implemented during the three-decade rule of Mugabe.”

The sources said Mnangagwa will also seek to strike a balance between civilian and military faces.

“There is tension between the military element and the civilian element in government and Zanu PF. Mnangagwa will need to find a balance. The composition will show who has the upper hand in government decisions between Mnangagwa and Chiwenga,” an official said.

In December last year, Mnangagwa was heavily censured for retaining Mugabe’s “dead wood” cabinet with tired, old non-performers, as well as some officials known for wreaking havoc in their localities.

Mnangagwa, a source said, was under immense pressure to set up a “refreshed cabinet that would gain public confidence that could turn around the country’s economic fortunes.”
“Expectations are high that cabinet will have new blood, skills and competencies to spearhead Zimbabwe’s economic recovery agenda. That is what the president is targeting to do, but competing interests might stop him from achieving that objective,” an official said.

Government sources said Mnangagwa’s headache also stemmed from whether he would reward former Finance minister Patrick Chinamasa for his loyalty during the height of succession squabbles in Zanu PF or he would dispose of him in favour of a finance minister who is hands-on when it comes to how the economy functions.

Diplomatic sources say the West, particularly Britain, is persuading Mnangagwa to consider working with the opposition.

However, sources say the military clique surrounding Mnangagwa and some hardliners in government are vehemently against the idea.

There are reports that British ambassador Catriona Laing discussed the issue with MDC Alliance leader Nelson Chamisa on Tuesday.

“We can confirm that British ambassador Catriona Laing had a useful meeting with Nelson Chamisa this week. At that meeting, Mr Chamisa gave his own assessment of the current situation in Zimbabwe following the elections,” a British embassy spokesperson told the Zimbabwe Independent.

“As our minister for Africa Harriett Baldwin indicated at the weekend, the UK has called on President Mnangagwa to reach out to those who did not support him or his party and to work to build their confidence and trust. We have also called on the opposition to play their part in healing processes.”

Mnangagwa also has to figure out what to do with his long-time loyalist July Moyo who was appointed Local Government minister in November last year but lost in the parliamentary elections.

Another of his key allies, Joram Gumbo, who was Transport minister in the last cabinet, has been tainted by endless controversies that have rocked the bankrupt flag carrier Air Zimbabwe. He is also accused of shielding dodgy officials at the Civil Aviation Authority of Zimbabwe.

Mnangagwa also faces a dilemma over what to do with Obert Mpofu, who was Home Affairs minister in the last cabinet.

Mpofu has been embroiled in controversies arising from his previous tenure as Mines minister. However, he generally appears to command political support and is one of a few politicians from Matabeleland who have won consecutive elections.

“It would also be interesting to see whether academic Amon Murwira, who was appointed Higher Education minister last year, will be returned to cabinet through Section 104 (3) of the Constitution after he lost Zanu PF primaries,” a source said.

Former Mimosa Mines chief Winston Chitando, sources said, is likely to be reappointed Mines minister after winning the Gutu Central seat in his first foray into electoral politics and having been commended by Mnangagwa for the way he has run the ministry.

Social commentator Maxwell Saungweme suggested that it would be wise for Mnangagwa to bring in individuals such as renowned economist Mthuli Ncube into Finance or Economic Development, to gain credibility from international finance institutions.