The former Vauxhall Labour MP Hon. Kate Hoey said: Mnangagwa is Mugabe mark two. This week has been spectacular by proving this statement as more or less correct but in reverse. In a feat of rage, Mugabe destroyed the agricultural sector to a point of no return. 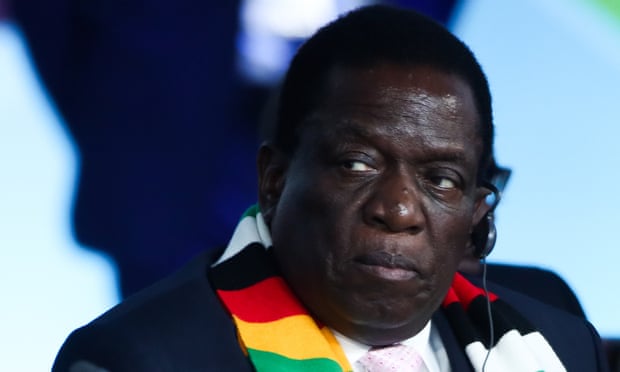 Realizing that the white farmers supported MDC in year 2000 financially and by vote, he wanted to teach them a lesson they will not forget. In retrospect, Mugabe taught himself a lesson he never forgot until his last breath. Instead of punishing the white Zimbabweans together with Cousin UK, he punished the entire nation and the generations to come. In his skewed logic, Mugabe was punishing the UK by fast tracking land reforms, so many people: black and white died in this exercise.

I need not repeat what we already know. Let me come to the point I want to make. Of late we have seen how Mnangagwa government repressed dissenting voices, critiques, all those who dared. So many people have died since Mnangagwa took office as president. People continue to lose their lives daily and the international community know what is going on in this country. The UN, SADC, AU, USA, EU, Amnesty International, and governments took exceptions of the brutality of Mnangagwa regime and openly condemned the atrocities going on in this country. In a typical Zanu style, they continue to refute accusations: instead, Mnangagwa comes out with the compensation package of white farmers to divert focus on crimes he is committing against the citizens of Zimbabwe. He is mobilizing 3,5 billion US dollars to compensate the white farmers. Within a week, Mnangagwa is talking yet another language once more. He is giving the white farmers their land back. Bravo!!!

Mnangagwa’s skewed logic is that if he gives the land to the white farmers unreservedly, the world attention will shift from condemning human rights to admiration of his “olive branch, if ever it is,” to embracing Mnangagwa regime for his kind gesture, correcting what Mugabe destroyed. But the UK, EU and America know this Zanu PF regime well: they are not stupid. They are truly knowledgeable about the thuggery, criminal minded, devilish government can be. They cannot trust it; it did not matter what. Zanu government lost credibility long back. It is so sad for Zanu to think that western countries will overlook human rights atrocities committed in this country as we speak right now and will salivate the return of land to the white Zimbabweans.

If the explanation to fast land reforms upset the UK government and the EU was based on race grounds, how do these countries continue to feed hungry Zimbabweans suffering from misplaced ego of Robert Mugabe and his henchmen? We realize that if Zanu government asked for financial assistance from international money lenders and they are declined, they will avenge their anger on Zimbabwean citizens, punishing the western countries by abducting, rape, brutal-savage beatings of unarmed innocent  Zimbabwean citizens to submission.

Mnangagwa is grandstanding he cannot compensate white farmers with 3,5 billion US dollars from bankrupt coffers. Not so long-ago in April this year, Finance Minister Mthuli Ncube was begging the international money lenders less three quarters of a million US dollars, that was declined on grounds that the money will be looted – again. Mnangagwa thinks white people are stupid and will buy his grandstanding. There is no money to repay white farmers. This country is bankrupt, money is looted daylight by those cronies in the party and government.

It is painful still to hear Eddy Cross talking about an emerging trillion-dollar economy in Zimbabwe after the pandemic. The circus goes on: these are white Zimbabwean bootlickers who mislead the government of Mnangagwa taking for granted his stupidity and ignorance. I live in Germany that has an industry largely depending on car manufacturing, among many other industries that sustain the German economy. Because of the corona pandemic, the industry is affected adversely: This is a trillion-euro economy shaken by global pandemic. Some dreamers in Zimbabwe are telling us that Zimbabwe is emerging with a trillion-dollar economy despite the corona pandemic – greater than that of Germany. Cross knows that Mnangagwa will believe this blatant lie.Mnangagwa is busy purging its citizens: people are incarcerated for flimsy accusations. As we speak the three young women who were savagely abducted, raped, savagely beaten, forced to eat faeces and drink their own urine are still to face trial. This is how cynical our government can be. Their thuggish behaviour knows no boundaries: they want to feed this narrative that the young women Joanne Mamombe, Cecilia Chimbiri and Netsai Marova abducted themselves. We know this party ever since we were in Zambia during the struggle and it does not surprise us that Zanu can turn tables around and accuse you of anything you did not do. That is their modus operandi since the time of the struggle for this country.

It is a disgrace to treat our children as fugitives in their own country. It is disgusting to reduce our hopeful generation by reducing them to sub-humans in their own country. Personalities like Hon. Mamombe are a promise for a better future of this country and this is how Zanu PF subject them to sub-humans. How do we parents of these girls comfort them: what, which words are we going to use as comfort them to heal their battered bodies and souls. Messing around with the future of girl-children is to mess around with the backbone of the nation. Zanu PF does not know this that women are valuable, are gold dust in any community in the world at large.

The white people are not stupid, va Mnangagwa, they see through your narrow mindedness. You can fool your lot in Zanu PF but not the international community. You think you impress them by selling them a dummy: Eddy Cross is bootlicking you to safeguard his multi-million dollar interests in this country, apparently cares very little about the common man.