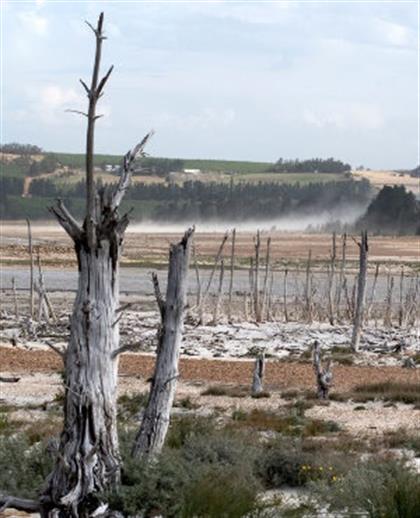 Zimbabwe’s agriculture sector, hard hit by drought, is facing another significant risk as dam levels recede due to the high temperatures.

The country, which is facing serious food shortages, has had a poor rainfall season and was hoping to turn to irrigated crop to mitigate the impact of the drought.

In his 2020 National Budget, Finance Minister Mthuli Ncube set aside a budget of some Z$500m for irrigation as a way of “climate-proofing our agriculture”.

He also set aside a budget of some Z$250m for dam construction.

According to the Zimbabwe National Water Authority, water levels in the country’s major dams have started receding owing to the prevailing high temperatures as well as the reduction in river flows.

“Continued drawdowns for domestic and irrigation purposes is also a major contributor,” the water authority said.

As at Friday, the national dam level average had dropped to 48.8%, ZINWA tweeted on Friday.

This, analysts said, will have a significant impact on the country’s irrigation efforts.

Experts have said a rise in temperatures associated with climate change also resulted in an increase in insect metabolism and growth rate.

Wendy Madzura, an agronomist with SeedCo, said farmers will have to increase crop scouting to minimise damage from insects.