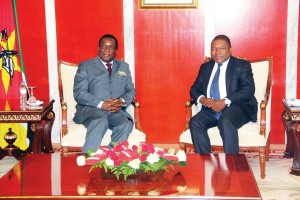 This was expressed by the presidents of the two countries Filipe Nyusi and Emmerson Mnangagwa, at a press conference after the two held closed door bilateral talks for three hours.

“Our countries must continue to work together to advance the path of progress,” said Mozambican President Filipe Nyusi. He said “proven sectors” of both countries should be more active in exploring opportunities and potential that exist to improve both countries economic perfomance.

“We need to be bold in finding partnerships to exploit existing opportunities,” said Nyusi, citing natural resources as an example.

The two countries have shared historic, political-diplomatic relations for over four decades.

President Emmerson Mnangagwa said that the two countries need to raise their level of cooperation, anchored on a partnership that produces results.

The Zimbabwean statesman spoke, without elaborating, on signed agreements which, however, did not materialize and called for the new phase of cooperation to be different from the previous one.

“We will demand results, we do not want more ministerial work that does not bring tangible results, we want our ministers to be proactive and bring us results,” said Mnangagwa.

Parallel to bilateral cooperation, Mnangagwa spoke of the transition process that pushed Robert Mugabe out of power. He said the transition was and would continue to be peaceful and his predecessor’s legacy will be preserved and treated with due consideration.

Regarding the general elections scheduled for this year, at an unannounced date, Mnangagwa said they will be abide by the democratic standards and transparency and freedom envisaged by the SADC and African Union principles. – opais.sapo.mz