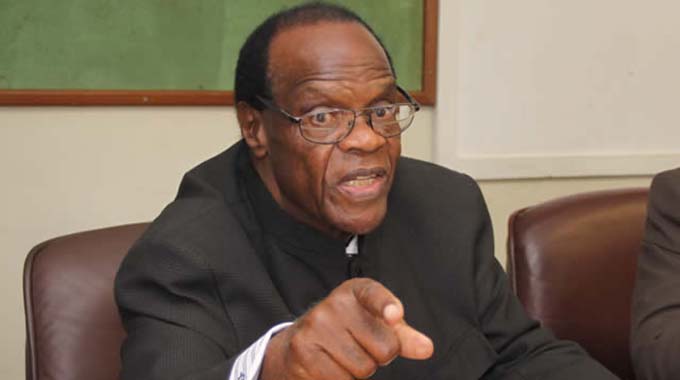 Daniel Nemukuyu Senior Court Reporter
THE Registrar-General, Mr Tobaiwa Mudede, is being sued at the High Court for turning down requests by men who wish to acquire birth certificates for their children in the absence of the minors’ mothers.

The RG’s Office allows requests by women seeking birth certificates on behalf of their children without conducting any tests to prove paternity, but the same office stands accused of discriminating against men.

Children who apply for birth certificates through their fathers are being denied the right to the official document due to policies at the RG’s Office.

Men must always bring the mothers of the children to the RG’s Office.

Justice for Children Trust, through its director Ms Petronella Nyamapfene, is challenging the constitutionality of the practice, arguing it is discriminatory and had the effect of violating the rights of the innocent children.

The voluntary organisation raised the issue after a Harare man, Mr Albarn Nyamadzawo, approached their offices crying foul over the conduct of the RG in a case where his daughter’s mother was not cooperating.

She was reportedly refusing to assist the child to acquire the identity document.

Justice for Children and Mr Nyamadzawo filed an application at the High Court seeking an order compelling the hospitals and other maternity health institutions to issue birth confirmation records of children to their fathers on request.

They are also seeking to compel the RG’s Office to register the children in the absence of their mothers.

The applicants are also seeking an order for costs against Mr Mudede and Home Affairs Minister Obert Mpofu in their official capacities.

In the application, Ms Nyamapfene argued that a number of fathers were struggling to acquire birth certificates of children born out of wedlock.

“A category of clients that have been knocking on the doors of Justice for Children across the country is that of fathers who are struggling to obtain birth certificates for their children,” she said.

“This is for two reasons: mothers who cannot be located and mothers who are unwilling to cooperate with the fathers in registering children.

“The latter is the problem of the second applicant (Mr Nyamadzawo) in this case. First respondent (RG) has been refusing to register children who are born out of wedlock and whose applications for registration are made by their fathers in the absence of the mothers or the documents of the mothers.”

The lawyers argued that Sections 11 and 12 of the Birth and Deaths Registration Act allows for children born out of wedlock to acquire birth certificates through their fathers, without the involvement of the mothers.

Denying a child a birth certificate, the applicants argued, was tantamount to denying him or her a number of rights.

“To deny a child a birth certificate for any reason is unconstitutional,” read the papers.

“If a child is denied the right to register simply because the mother is refusing to cooperate, then the child is also denied the rights to citizenship, which flow from one being properly registered as proof of such citizenship. Anything that hinders or substrates from compulsory registration is unacceptable at law.”

The lawyers argued that if a mother abandons the child, the father can still register in her absence or even without the mother’s documents.

“Rather, the one who claims that the man is not the father should bear the onus to prove his or her claims. This rebuttable presumption is what applies to mothers.

“There is nothing to be achieved in placing an extra burden on fathers to prove their paternity prior to registration.

“Mothers are not asked to prove their maternity when they register the children.

“All they bring is a birth record if the child was delivered in a hospital or clinic or a witness if they delivered elsewhere.”

The best interests of the children, the lawyers said, cannot be served by preventing their fathers from registering them when such fathers come forward and accept responsibility and fatherhood.

The lawyers argued that such discrimination was not reasonable and justifiable under Zimbabwe’s constitutional framework.