Mugabe was a towering figure against colonialism – Ramaphosa

Source: Mugabe was a towering figure against colonialism – Ramaphosa | News24 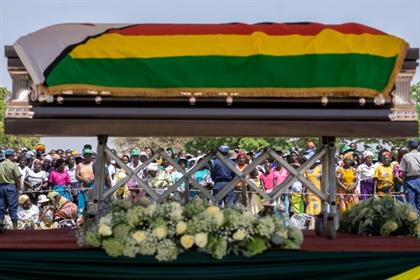 Ramaphosa was speaking at the Pietermaritzburg City Hall on Friday evening where a full public gallery attended a memorial for Mugabe who recently died in Singapore.

He said Mugabe was prepared to sacrifice much for the freedom of SA.

“He was prepared to risk the fortunes and infrastructure of their own country so we in SA could be free. He was prepared to give free passage to Umkhonto we Sizwe soldiers to come through Zimbabwe and launch operations in Zimbabwe knowing well he would risk reprisals from the apartheid government.”

“Did he flinch or hesitate? Not Mugabe, he was prepared to support us to the end. He was an African patriot, believed right of self-determination of African people.”

“This trait of recognising his African identity was chiseled into his being in SA where he attended Fort Hare University. The university had a lasting impact on Mugabe. It gave him an identity as an African. We will forever remember him as a gigantic intellectual.”

He said Mugabe’s anti-imperialist stance was precisely what made him a revolutionary.

“He said the fate of Africa must never be determined anywhere besides the African soil. He remained steadfast and had an unflinching commitment for what he stood for.”

Ramaphosa also said the ANC and Zimbabwean ruling party Zanu-PF would always be allies. He called for international sanctions against the country to be removed.

“As ANC we will always be on the side of Zanu-PF and Zimbabwe. It is for these reasons we are publicly saying sanctions on Zimbabwe must be lifted now without fail.”

We must be able to apologise to our people

Recalling being booed in Zimbabwe, Ramaphosa said it was also important that an apology be handed to South Africans.

He said that following xenophobic attacks in SA in recent weeks, he had to say sorry to locals.

“We have to balance things. We have to apologise to our own people. As much as we brought changes, many of our people are still unemployed and poor. For that I apologise and we are going to work very hard for our people.”

He said it was important for the ANC to humble itself to the public.

“We must be able to say to our own people, we regret we are in this situation. It is for this reason we are working hard and intensifying our efforts to create jobs and other economic opportunities.”

Newer Post
Pastor Evan Mawarire: ‘Never, ever lose your voice – it is the most important resource you have’
Older Post
Mugabe is dead, but old men still run southern Africa