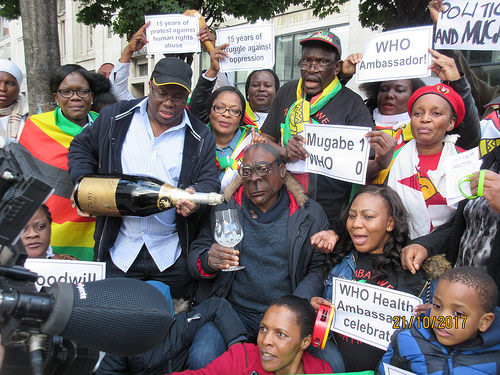 The little-known Presidential Travel Committee (PTC) includes some of the most creative minds in Zanu PF. Apart from top presidential aides, its members include senior officials from the Reserve Bank and the Finance, Health, Foreign and Psychomotor ministries, as well, of course, as the Central Intelligence Organisation. 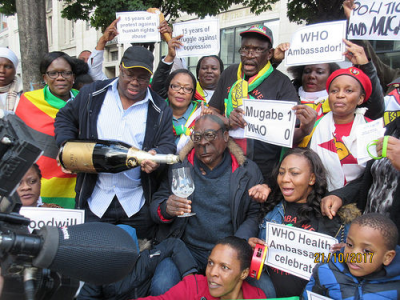 The committee is in almost permanent session, alert to be convened at a moment’s notice when plans have to be changed suddenly. Then it’s a matter of brainstorming all night. One source told the Vigil: ‘Sometimes we don’t know from minute to minute where we are going or how we are to get there. But thankfully money is no problem.’

Such a moment occurred last week when Mugabe decided against going to the Russian city of Sochi for a youth meeting at which he was to be honoured for ‘fighting imperialism’. It was not because he is 93 years old that dissuaded him from going to the youth festival. It was because he discovered no one else would be there except kids. Grace could go instead.

It just shows how slickly the PTC operates that it was immediately able to discover from the UN website that an equally obscure meeting was being held at the same time – this one in South America, where there was every likelihood of some grownups being present.

The PTC certainly struck gold – even if only briefly. The occasion was a World Health Organisation conference in Montevideo, capital of Uruguay (population 3.5 million) called to discuss non-communicable diseases. Official Uruguayan sources said 22 health ministers were to be there, along with officials from other countries (see: http://www.plenglish.com/index.php?o=rn&id=19553&SEO=world-health-conference-in-uruguay-to-be-attended-by-94-countries).

It was enough for Mugabe to fly there with 80 or so flunkies in Air Zimbabwe’s remaining Boeing 767.

Overawed to have an actual president at the meeting to shake hands with host president Tabaré Vázquez, the new WHO boss, Dr Tedros Adhanom Ghebreyesus, who was apparently installed to reform the organisation, had the inspired idea of making Mugabe an honorary regional health ambassador.

Corks popped among the PTC members, conveniently all there on the trip. The honorary post is a non-event but the dopey WHO boss. who seems to be unaware of what is going on in Zimbabwe, unfortunately made laudatory comments on health provision in Zimbabwe – currently reliant on donor-funding. The remarks were immediately derided by people around the world who knew that Zimbabwe’s hospitals are broke and lack medicines.

With one of the three Air Zimbabwe Boeings out of commission the two Boeings needed to take the delegations to Russia and Uruguay seem to have meant that a third aircraft had to be chartered to take Grace Mugabe to China where, for unknown reasons, she wanted to stop over on her way to Sochi (see: https://www.newsday.co.zw/2017/10/mugabe-grace-bleed-zimbabwe-dry/).

The only bright spot for the WHO is that Grace didn’t go with her husband to Uruguay. Otherwise she might have been made honorary WHO ambassador for young female victims of violence by extension cords . . .

FOR THE RECORD: 52 signed the register.