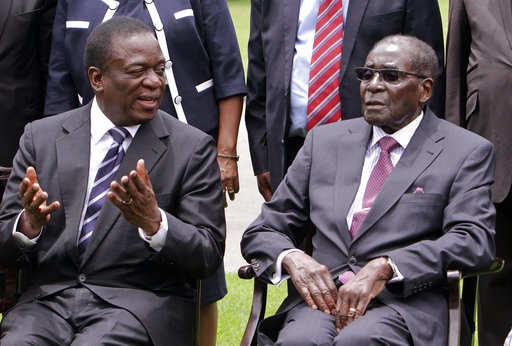 Farirai Madhumbe | Former President Robert Mugabe must be having the last laugh as the ugly head of factionalism rears its ugly head again in the party that got rid of him hardly a month ago. 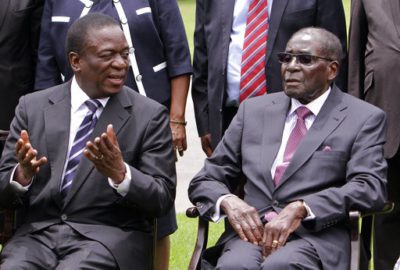 The local Daily News reports that divisions have returned to haunt Zanu PF barely a month after a military operation rooted out members of the Generation 40 (G40) faction who were campaigning for former first lady Grace Mugabe to succeed her 93-year-old husband.

While the military intervention code-named Operation Restore Legacy pulverised G40 elements, the subsequent retirement and deployment of top army chiefs in strategic positions in the governing party has angered civilians in Zanu PF.

The disquiet has also created a rift among members of the Zimbabwe National Liberation War Veterans Association (Znlwva) who, along with the Team Lacoste faction, took a great risk of frustrating former president Robert Mugabe’s attempts to anoint his wife as heir apparent ahead of Emmerson Mnangagwa, who had to be assisted by the military to assume the top job.

There are concerns among a section of Znlwva and civilians that dominate the Team Lacoste faction that the military has to all intents and purposes usurped civilian control of the party ever since the dramatic fall of Mugabe last November after 37 years of misrule.

As consequent of the discord, Zanu PF is now split into two camps — Team Lacoste and Cosleg.

Team Lacoste derives its name from Mnangagwa sobriquet “Ngwena” or crocodile while the moniker Cosleg is a fusion of two military investments that came about when Zimbabwe deployed almost half of the army in the late 1990s to defend the regime of slain Congolese leader Laurent Kabila against a rebel incursion backed by Uganda and Rwanda.

Cosleg is basically derived from Comiex Congo and Osleg — taken from the commercial arm of the Zimbabwe Defence Forces (ZDF) whose full name is Operation Sovereign Legitimacy.

Following the demise of G40, the military presence is Zanu PF is now pervasive.

Top army chiefs now wield considerable influence in the party, among them Constantino Chiwenga, who was retired from ZDF to take up the position of vice president and second secretary of the ruling party and government.

The party’s commissariat is now headed by retired lieutenant general Engelbert Rugeje, whose appointment was at the expense of Victor Matemadanda, the secretary-general of Znlwva, who was stripped of that role at the ruling party’s extraordinary congress held last December.

More appointments have since been made to the commissariat department where retired air vice marshal Henry Muchena and former director (internal) of the Central Intelligence Organisation Sydney Nyanungo now command strategic positions at the party’s headquarters in Harare.

Some of the war veterans who led the anti-Mugabe crusade told the Daily News yesterday that they want an indaba with Mnangagwa to express their disquiet, saying it was becoming apparent that they were being reduced to spectators in a game in which they should be at the centre of the action.

“There is a strong feeling among war veterans that their contributions in removing Mugabe were not rewarded. Yes, we are being sidelined. Those who were benefiting under the Mugabe regime are the same people who are benefiting now,” said Znlwva chairperson for Mashonaland Central, Sam Parirenyatwa.

“Right now, there are efforts to engage government. In fact, there are calls for a war veterans’ indaba so that we reflect (on these developments). We did not get into party structures. For instance, in Mashonaland Central, all the positions were given to bystanders. We also lost the commissariat post to the military,” added Parirenyatwa.

Parirenyatwa was one of the most visible figures in the Team Lacoste faction during its protracted war with G40 over Mugabe’s succession.

Matemadanda down-played the emerging differences yesterday, accusing those who are crying foul of being the same people who attended Mugabe’s divisive rallies and cheered while the G40 faction was still in control.

The Znlwva secretary-general, who is now the deputy minister of War Veterans, said those who were left out should eat a chill pill and give a chance to others.

“It is total discrimination to say the military should not have a role. We cannot discriminate people on the basis of their previous stations in life. The people who are discriminating against a certain group are being unfair, they cannot say a soldier should not get a job; it is wrong — even in other countries they get the jobs,” said Matemadanda.

“We have our heroes, let us celebrate them. No civilian could talk about Zanu PF until the military came in. The former freedom fighters gave them time to rule — this time we will not leave office because the civilians were the same people who were cheering Mugabe and Grace”.

Respected University of Zimbabwe professor of political science, Eldred Masunungure, opined that the fallout between the military and the civilian part of the governing party was inevitable given that the military wing of Zanu PF openly came out on November 15 and declared an interest in the country’s politics.

“The military and the civilian division of Zanu PF has always been part of the ruling party power structure since pre-independence. The guerrilla face is what constitutes the military side but it did not play out publicly. Now it is becoming more pronounced — the military is now expressing itself. This is not a new phenomenon but now the guerrillas see that time is running out and there will be tension with the civilian side of government,” said Masunungure.

Maxwell Saungweme, another analyst, said the military versus Lacoste factionalism was a clear indicator that more is coming and factionalism is in the DNA of not only Zanu PF but Zimbabwe’s politics.

He said the military intervention was never about Mnangagwa being president, but Chiwenga taking a huge step forward to realising his alleged presidential ambitions.

“If you recall some time back, I said to this paper that when you see military generals getting PhDs, they are ambitious and they will be eying the Commander-in-Chief post. Chiwenga is an ambitious general and the coup was a step in achieving his ambition,” said Saungweme.

“He could not have taken over now as it would have been clear to all, including the ineffective African Union and the Southern African Development Community that it was a coup: So Mnangagwa’s presidency is just part of Chiwenga’s calculated ascendency to the presidency”.

The history of factionalism in Zanu PF is as old as the party itself.

When Mujuru died in a suspicious fire at his farm in Beatrice in August 2011, his wife, Joice, became the face of the faction.

Before his death, Mujuru had masterminded his wife’s ascendancy to the position of vice president ahead of Mnangagwa. But after his death, his wife became exposed to Zanu PF hawks who schemed her ouster in 2014.

Immediately after Mujuru’s ouster, another faction, G40, emerged to fight Mnangagwa’s Team Lacoste between 2014 and mid November last year when the military, under Chiwenga, stepped in to annihilate G40.

The re-emergence of factions in the ruling party is among early signs of discord in the new administration.

Another highlight of the divisions came to the fore when the leadership clashed over the firing of at least 30 senior cops.

Although Mnangagwa reversed the decision and only “retire” nine — the battle lines between Cosleg and Team Lacoste are now well-defined, according to sources.