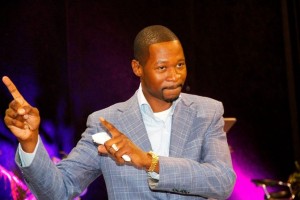 This was as Makandiwa was last week trying to avoid trial by claiming legal immunity. Makandiwa claimed that he possesses special ecclesiastical privileges which shield him from the jurisdiction of the courts.

All this was in the case in which he is being sued for fraud having participated in and caused the defrauding of his congregants Upenyu and Blessing Mashangwa. The couple eventually lost millions of dollars after Makandiwa had allegedly used his pulpit powers to impose a fake lawyer, Mr. Tichaona Mawere.

The case comes as the Law Society for years revealed that Mr Tichaona Mawere is not a registered lawyer.

Makandiwa then applied for exception.

But Justice Mangota ruling, compared Makandiwa with the convicted Robert Martin Gumbura, who was also a church leader. Justice Mangota said Gumbura’s case was proof that every person is fallible and no one was immune to making mistakes.

He said, “the background to the above citation is that Gumbura, like the first two defendants, was a leader of his church. He was tried and convicted of rape by a magistrate. He appealed to this court against conviction and sentence. He unsuccessfully applied to the magistrate for bail pending appeal. He appealed to this court and also failed. He appealed to the Supreme Court against the decision of this court which refused to grant him bail pending appeal.
“He submitted, as a ground of appeal, that the complainants took an inordinate delay to complain against what he was alleged to have done to them. He said the complainant’s delay in report the rape showed that his prospects of success on appeal were very strong. The learned judge of appeal rejected his argument. He remained of the view that Mr Gumbura had to prosecute his appeal while he is in prison. He, therefore, dismissed the appeal.
“Two important matters come out of the above cited case. The first is that every person is fallible. No one is, therefore, immune to making mistakes.
“That is so notwithstanding the person’s standing — social, spiritual or otherwise — in society. The second is that, where one commits a crime or a wrong (ie delict) the person
cannot escape the long arm of the law.

“He will either be prosecuted or sued, depending on what is alleged to have been done. That depends on the definition society places on his conduct. That will, once again, occur irrespective of his status — social, spiritual or otherwise — in society.

“Applying the above-observed matters to the current case, therefore, the defendants (Prophet Makandiwa, his wife Ruth and UFIC) cannot be allowed to hide behind the proposition that their situation relates to ecclesiastical matters which the court has no jurisdiction to determine.”

“A fortiori when the Maheya case upon which they placed reliance was over-ruled by the Supreme Court. Where they are alleged, as in casu, to have acted fraudulently to the prejudice of some of their congregants the latter have every right to sue them. The plea which they advance will not, therefore, assist them. ”

Justice Mangota said Makandiwa was properly sued because of the statements which he made and the fact that he was also close to the Mashangwas. He then dismissed Prophet Makandiwa’s exception application with costs. The matter will proceed in terms of the High Court Rules, 1971. 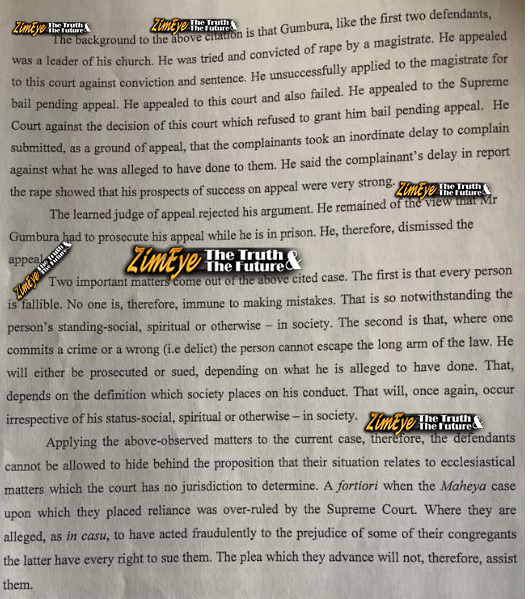