FORMER first lady Grace Mugabe allegedly assaulted a housekeeper at her Blue Roof mansion with fists and a shoe after she accepted a cash gift as a wedding present from former president Robert Mugabe, according to a High court application filed by the ex-worker.

In her court application, Shupikai Chiroodza claims she was accused of “milking” the 95-year-old before being “unfairly” dismissed by Grace and the Civil Service Commission.

Grace is already mired in other legal woes after allegedly assaulting Gabriella Engels, a Johannesburg model, with a power extension cord in 2017. The South Africa National
Prosecuting Authority applied for her extradition.

Chiroodza, through her lawyers Mtetwa and Nyambirai, is seeking to be reinstated to her old job and enjoy full benefits that would have accrued to her from the time she was
“unlawfully” dismissed in May 2017.

The matter is filed under case number HC3310/19. Chiroodza was employed by the Civil Service Commission in April 2008, then known as the Public Service Commission, in the
Office of the President and Cabinet under the State Residences department, as a housekeeper at State House. She was then transferred to the Mugabes’ Blue Roof mansion and
promoted to the position of Comptroller 111 on June 21 2015.

The Civil Service Commission and Public Service, Labour and Social Welfare minister Sekai Nzenza are cited as the first and second respondents respectively amid reports
that the commission is negotiating an out-of-court settlement.

According to her court application, Chiroodza received a call to report to the human resources office on March 13 2017 where she was told there was an instruction from the
senior principal director (Department of State Residences), Innocent Tizora, to place her on forced leave. Tizora told Chiroodza that the forced leave was in connection with a wedding gift. Chiroodza demanded written communication notifying her that she was being placed on forced leave.

“… I then asked him to release me to go back to my work station. Immediately after leaving his office on my way to my work station I received a phone call from Dr Tizora
again telling me that the former first lady (Grace Mugabe) was waiting for me back at my station and so I drove there and arrived around 1700hrs,” she says in the
application.

“Upon arrival at my work station at about 1700hrs on 13th March 2017, I saw the then first lady waiting for me, when I reached the main door of the house where she was
standing she started shouting at me and seized me by the neck and pulled me inside the house and locked the door. She started beating me with clenched fists shouting,
‘unoda kuzviita ani pano? (who do you think you are here?) you are milking my husband behind my back’. I did not utter a word as I was terrified. She removed her shoes and
continued assaulting me with it and blood started gushing out of my forehead, mouth and nose. The assault continued for about 20 minutes. 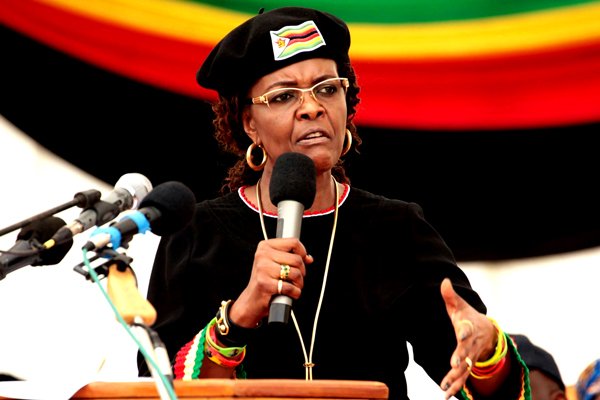 “At that point some cars arrived with some visitors, she said to me ibva pano! Dai asiri ma visitors angu asvika I wanted to kill you ndakangozvinzwa kuti waudza ani or
report anywhere I will definitely kill you. (Get away from here, had it not been for my visitors who have arrived, I wanted to kill you. If I hear you told anyone or report
anywhere, I will definitely kill you). After taking her visitors to the other rooms, the former first lady harshly said to me, ‘I want the money that you were given as a
gift on your wedding and I don’t want to see you here again’. I left and drove home.”

In the application, Chiroodza explains how the human resources section took back the car she had been using without any proper handover. She then received a letter from
Tizora on May 19 2017 stating that she had been discharged from the service with effect from May 11 2017.
She says no investigations had been carried out on the allegations of misconduct against her. There was also no written letter notifying her of the allegations and no
report had been forwarded to a disciplinary committee for a formal hearing according to the Public Service Regulations 2000.

“In short, none of the most basic procedure for dismissing a person from employment with CSC were followed, hence I contend that I was not dismissed and remain an employee
of the CSC,” the application reads.

“However, at the time, I did not have the courage to go and ask Dr Tizora about this or make any move with regards to this issue because I greatly feared for my life.”

Chiroodza then approached the CSC at the end of May the same year but could not get assistance, the application reads. Further follow-ups did not help until Tizora was
replaced with Douglas Tapfuma in January 2018. Tapfuma also failed to help.

Chiroodza said her current application is for “a declaratory order and consequential relief in the terms set out in the draft order, particularly that to declare the following: The applicant was not dismissed or otherwise terminated from her contract of employment in terms of the Public Service Act or its Regulations. The applicant remains an employee of the Civil Service Commission until such a time as contract is lawfully dealt with.”