Mujuru And Grace Mugabe Gang Up Against Mnangagwa, AU Petitioned Over Coup | LATEST

Ray Nkosi | The two women who have given President Emmerson Mnangagwa a run for his money in the Zanu PF succession war, Joice Mujuru and Grace Mugabe have teamed up aganist him. 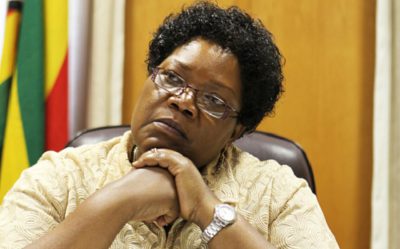 Mujuru met with former President Robert Mugabe and his wife Grace earlier this week, came out to report that the two had confirmed to her that indeed a coup had taken place.

At the time of writing ZimEye.com is also receiving reports that the African Union has been petitioned over the coup by a G-40 linked new opposition party the New Patriotic Front with explosive details being revealed on what really transpired on the 15th of November.

Mugabe apologised to Mujuru during their meeting, “I was misinformed and I decided to call you so that I can say I’m sorry, my daughter, we were misled. I have come to know that all the people who were fighting you are Mnangagwa and Chiwenga. It was a grand plan to get to me and not yourself.”

Mujuru then reiterated to Mugabe that: “Baba (father), I told you that I had nothing against you. All these people were fighting me simply because they wanted to expose you and get rid of you.”

Mnangagwa assured the just ended AU Summit that Mugabe was well and safe.

“May I inform this august chamber that, your brother, President Mugabe is safe, secure and well,” President Mnangagwa said to applause, adding that it was his duty as leader of the current administration in Zimbabwe to preserve former President Mugabe’s legacy as the founding father of the country.

Mnangagwa also told the Summit that Zimbabwe had seen a peaceful transition and that it was looking forward to working with all countries.