-it ends in tears as robbers flee from him…

-“I can’t be arrested for stealing my own money…

Source: Mukuwasha arranges for robbery on lobola day…. – The Zimbabwean 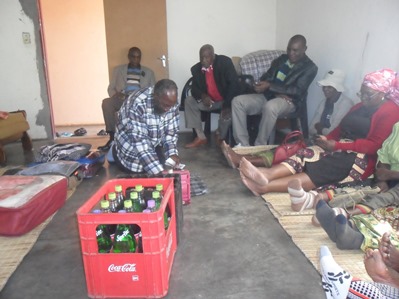 A carefully crafted plan to marry a beautiful lady for free backfired terribly for Murisi Tambara (34).

Murisi had arranged to pay lobola for Madeline Muchaona (24) in Greendale on the 27th of October and at the same time stage managed a robbery to get his money back.

The plan appeared to be on course when the robbers led by a man only identified as Matso pounced just after Murisi had finished paying US$8 560 in cash. The gang sped away in a Subaru and efforts to catch them were fruitless. Murisi and his lobola team as well as makoti’s family were roughed up and Murisi was even bleeding from the lips to make the act convincing.

Murisi and the family rushed to make a police report. He was also in a hurry to get his money back from the robbers who he had promised $1 500. To make matters worse he had borrowed $3 000 from a friend promising to pay back the day after the lobola.

But the robbers switched off their phones and shared the money.

The cops also got suspicious and seized the lobola team’s phones.

Incriminating calls and WhatsApp messages were found on Murisi’s phone and the munyai’s phone.

They were arrested but Murisi in his defence said, “I can’t be arrested for stealing my own money.”

He is expected to appear in court soon.