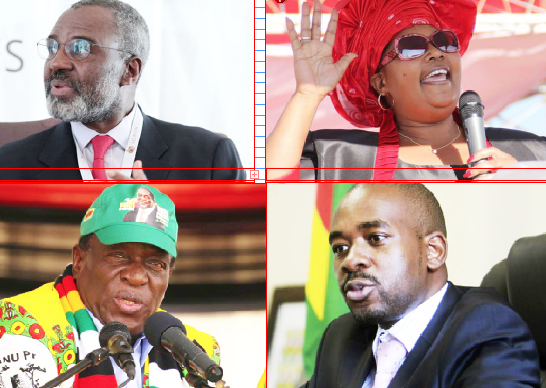 The forthcoming general elections scheduled for July 30 are literally four weeks away, but public discourse remains focussed on the referee, the Zimbabwe Electoral Commission and the rules of the game.

There is limited attention on the political parties (teams) that are vying for public office. We risk having a perfect election in terms of observing the rules, but with limited knowledge on who among the political parties has the best ideas to take the country forward. We (Sivio) developed the Zimbabwe manifestos analysis tool (Zimat), as part of an effort to steer public debate towards an objective appraisal of what each political party stands for.

Zimat is an online-based tool that compares political party manifestos in terms of the extent to which the pledges that they make are practical and can be implemented within the five years if voted into office.

A manifesto is a “statement declaring publicly the intentions, motives, or views of its issuer”. We note from the beginning that there is an inconclusive debate on the utility of these documents.

Questions being raised include:

In May and June, we ran an online-based survey on voting decision-making. We were interested in finding out how voters settle on a leader of their choice, at council, constituency or presidential level. We found that there is a significant (42,11%) portion that reads and compares manifestos. Furthermore, findings from an earlier survey carried out in February found out that citizens expect officeholders to address specific public problems, ranging from under-performance of the economy, collapsing social service delivery through to corruption. The analysis of manifestos provides probably the best way of methodically examining if the political party is responding to the needs of citizens. It is also a more reliable unit of analysis, especially when we want to compare political parties.

We had to find common ground to create a reasonable comparative framework. We went back to the surveys we had done in the past and looked for things that citizens cared for the most. We identified nine issue-clusters. We then catalogued all the promises made within the manifesto into the nine clusters. Each promise analysed had the potential of scoring a total of six points, and thus the score of each promise was the weighting or, as we would have called it, the Sivio score. The Sivio score measures each promise on its own merits and the scores are aggregated initially per cluster, as well as overall. The manifestos contained varying numbers of promises ranging from 80 to 484. Our framework’s scoring is based on a perfect of six multiplied by the number of promises made. We then use the actual score per promise and divide that with the perfect score and multiply by 100 to get the Sivio score. The table below provides a summary of the pledges made by each political party across the nine clusters.

This data is also important for one to be able to appreciate the priority areas for each party. Though the Sivio score can weigh the quality of promises in the sectors, one may also want to know which areas the parties are focussing on. It must be noted that many promises do not fit neatly in a single category, thus they were placed in the best possible fit. Though the analysis provides a substantive glimpse into the ideas of each political party, it cannot substitute a full reading of the manifesto document, and the promises therein.

The manifestos vary in terms of their lengths and the manner in which they are organised.

The majority, except for Nkosana Moyo’s Apa, are voluminous (+/-200 people), making one wonder if they are intended for the general public. The language used is mostly technical expert-based jargon, which may be alienating to the majority of the readers. We found it interesting that Zanu PF did not make any pledges towards improving political and civil rights — an issue they have been criticised for over the years. We also found it odd that the MDC Alliance’s campaign, commonly referred to as Generation Consensus, does not have a single pledge towards the youth. Nkosana Moyo’s APA does not make any commitments to the youth and also does not feature gender in the programme of action.

We also sought to determine the extent to which the actual pledges contained in a manifesto were realisable given the context of scarcity, limited timeframe and other competing interests. Using this consideration, we found that the political parties with fewer promises scored higher compared to those with a lot of promises.

APA and Thokozani Khupe’s MDC scored higher on the realisable pledges, compared to Zanu PF and the MDC Alliance, whose manifestos have more than 300 promises each. Our tool is an analytic comparative framework influenced by strategy literature. We settled on the Smaart framework. We might as well add that we developed our framework well before the MDC Alliance launched its manifesto. The framework measures the extent to which each promise made is specific, measurable, achievable, affordable and timebound (Smaart).

There is a new consensus in town: Market-based development. Each political party has more than 50% of its pledges towards resolving challenges within the economy. While in the past, manifestos were used to provide an opportunity to articulate deep ideological beliefs, in this instance we do not see that.

As far as economic turn-around strategies are concerned, the parties seem to have been taught by the same economics professor, except for some miniscule nuances. All the parties identify the need for big infrastructure projects, which include the upgrading of power plants, airports and roads. The parties are also committed to the revamping of agri-businesses, completion of land tenure reforms, extending land under irrigation, renewable energy and revamping industry as top priorities.

All of them recognise the importance of mining. There is also commitment to reforms which will simplify and hopefully reduce the bottlenecks in doing business. It is important to note that Zimbabwe ranks 159th in the world and 29th in sub-Saharan Africa in terms of the ease of doing business.

However, and more critically, all of them are not clear on resource mobilisation to fulfill some of these lofty goals. The MDC Alliance, Zanu PF and to a limited extent, APA, are focussed on attracting investors from outside. APA and Zanu PF also realise the role of local resource mobilisation, although it reads like increasing the burden of taxes on the citizens. However, some of the measures do not require financial investments but revisiting the bureaucratic red-tape that slows down the rate at which new businesses can be established. To be sure these are political manifestos written by men and women out to win an election and, where necessary, they hit the right notes — all of them talk of financial inclusion — buzzwords in development circles, but fast losing meaning. More importantly, there is lack of detail on forecasted actual costs of the various initiatives proposed, yet this is central to establishing the impact of these initiatives on the budget deficit.

All manifestos, especially the Zanu PF one, are a total rejection of the heterodox model that was unevenly pursued under former president Robert Mugabe.

None of the parties make any reference to indigenisation, instead, the recommended reforms such as in mining are to do away with the constraints of local ownership. There is, in fact, a renewed embracing of market forces in a manner that does not totally recognise the devastating effects of structural adjustment — which gave birth to Zimbabwe’s crises.

Under Nkosana Moyo, for instance, state-owned enterprises will be turned around for eventual privatisation — again the benefits of such privatisation are assumed to be a public good. The Khupe-led MDC’s manifesto is the only one that goes into detail to make suggestions for a pro-poor, but is still a market-led economy. It attempts to ensure that small and medium enterprises, rural cooperatives and rural enterprises are part of the business compact.

Zanu PF is also not too far behind in thinking about formerly marginalised groups — they have repeatedly emphasised the importance of a women’s bank and, for some reason, it was launched before elections, maybe as an attempt to prove to naysayers that they take their commitments seriously. Build Zimbabwe Alliance and Khupe’s MDC suggest the setting up of a fund to support small-scale mining. All these measures of inclusion sound good, but risk relegating the locals into the periphery of the economy and, instead, leave the real economy in the hands of foreign direct investment players. There is no doubt that Zanu PF’s indigenisation policy was ill-conceived and served to line-up the interests of a very small politically-connected elite. That does not mean indigenisation is a wrong policy to pursue.

It seems Zanu PF’s fascination with the actual redistribution of land is incomplete — they are still committing to “broadening access to land by all Zimbabweans”. This by any measure is disconcerting — the redistribution of land has caused major upheaval and uncertainty in the economy and there is need to bring the whole process to a close. Other political parties are focussed on resolving the issue of compensation to former large-scale commercial farmers and resolving the land tenure question. On the other hand, APA — maybe without intending to sound like they want to reduce Agriculture’s contribution to the gross domestic product (GDP) from around 11,23% to 5%. One hopes that what they are actually suggesting is to grow other sectors such as industry and services, which would reduce the contribution of agriculture to GDP.

Despite the similarities, we also noted unique positions adopted by political parties, which could be game changers in terms of attracting new voters.

Murisa and Chikweche work for Sivio — a think-tank focussed on public discourse pertaining to socio-political and economic issues on Zimbabwe.