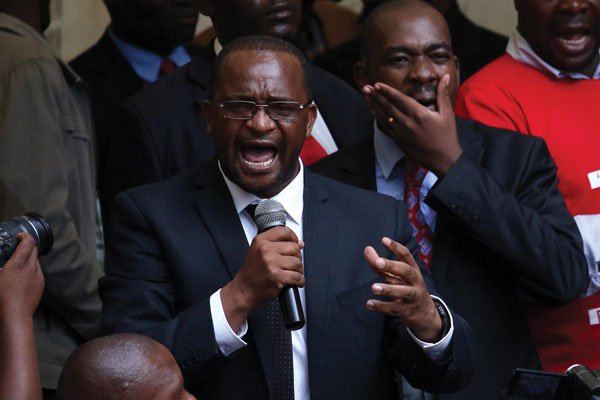 MDC secretary-general Douglas Mwonzora struck a secret pact with party leader Nelson Chamisa, which led to him withdrawing from the presidential race ahead of next month’s elective congress, NewsDay has gathered.

The deal was confirmed by the two protagonists before voting took place in Manicaland on Sunday.

In a video released on social media yesterday, the two MDC leaders jointly addressed the Manicaland provincial council to confirm the development.

“We discussed with Mwonzora and said to each other, the food in the plate belongs to both of us, we must not fight. (The late Morgan) Tsvangirai left me wearing (presidential post) his jacket, so let me keep wearing it for now. We agreed because we both want to do things that build the party so we agreed that each of us keep our posts. I said leave me as the captain while you pass the ball to me,” Chamisa said.

Mwonzora, who was standing next to Chamisa, confirmed the deal, saying he was happy to keep Chamisa in the presidential seat at the congress while he battles to retain his own post,

“Thank you president Nelson Chamisa, I have come to speak for myself in the Manyika dialect which you all understand, I want to say this as Douglas Mwonzora who comes from Manicaland. We agreed with the president (Chamisa) that this coming congress our president will be Chamisa, we agreed again that I will try to retain my position as secretary-general of the party,” he said.

Yesterday, Mwonzora, however, said his message must not be construed as having struck a deal with Chamisa, adding that party positions are not earned through such arrangements.

“We have no deal with the president. If what I said conveyed the impression of a deal, then that is not the case. There are other contestants for positions within the party, so we cannot have a deal where we share positions.

Die-hard MDC supporters were excited by the news of Chamisa and Mwonzora pledging to work together. Insiders, however, insisted that the two, with the help of outsiders, had agreed that Chamisa would offer Mwonzora protection so that he could retain his post and possibly renew their rivalry at the 2023 congress if the MDC fails to win the presidency in elections.

Highly-placed sources said the deal was reached after it became increasingly clear that Mwonzora would not garner sufficient nominations for the post of president after most of his supporters lost in district elections at the time Chamisa wanted to keep party loyalists. Chamisa has been accused of being more accommodating to newcomers at the expense of the old guard which stabilised the party in its turbulent moments.

“Mwonzora and Chamisa struck a deal, that deal is being resisted by Charlton Hwende who is fighting tooth and nail to derail any attempts to sideline him for the influential post,” the source said.