In its natural state, the human body is a work of art – a thing of immense beauty. Nudity forms the backbone of a multi-million-dollar erotica industry, although its acceptance varies from society to society, and among individuals.

Source: My advice to the ZRP and MPSE: Find the Decency to Leave Mhlanga Alone! – The Zimbabwean 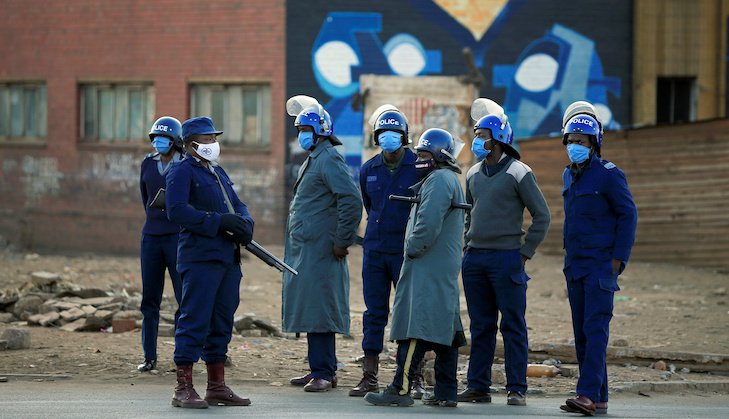 Millions of more people with high body positivity also like to look themselves in the mirror and to take pictures of themselves in their nude state. In some countries, there are even designated public areas where ‘naturalists’, as they are sometimes called, are free to enjoy nature while mingling with each other in their nude. The most commonly known of these are perhaps nude beaches.

While I have no problems or adverse opinions about such behavior, there could be potential adverse consequences if one’s nude photos find their way to the wrong or unintended recipients. This is particularly true for people holding public office or those considered to be respectable people in society by their social status or by any other reason. Society venerates them and an error such as that of accidentally sharing nudes can easily set a lot of tongues wagging and spark viral social media trends in a matter of moments. This is the case in point with a Khumalo Headmistress, Stella Mhlanga, who accidentally posted an uncensored image of her privates on her WhatsApp status.

Although it is reported that she quickly took down the image and issued an apology, some of her excitable tech-savvy contacts had already taken screenshots and shared them with their contacts. When I read the story, it did not surprise me. To me that was inevitable; people like a show!

Then I read yesterday a statement by a Primary and Secondary Education ministry official, Taungana Ndoro who says that his ministry has set up a committee to investigate her after which necessary intervention will be prescribed. The news article has quoted Ndoro saying “such behavior is inconsistent with such positions because such people look after children and must be exemplary.” What a thing to say!

The ZRP is also reportedly planning to press charges under anti-pornography laws. It is these sentiments by Ndoro and the reports of the potential arrest of Mhlanga that have prompted me to pen this opinion piece.

Mhlanga is in trouble. She is literally in hot soup!

And I have some concerns. Firstly, what worries me is the timing of the said investigation. The woman is undoubtedly going through a difficult time and there has been social media speculation at one point that she had committed suicide after she had gone under the radar after the incident. Although this was mere speculation which was later refuted, it does give hints into the difficulties she might be going through in dealing with the matter.

Hence, in an ideal scenario, the most urgent task on the part of the MPSE would have been to provide her with professional help to assist her to deal with the incident and to also assess the risk of her committing suicide or causing some form of harm to herself. But unfortunately, what we find is the opposite. The Ministry and ZRP are rather plotting to swoop in on her at her most vulnerable time, adding insult to injury.

Now before you read me out of context, I do not condone sharing of one’s uncensored nudes on WhatsApp status or another public forum.

Also, one’s nudes kept in their private gallery are not pornography. Like I said in my opening paragraph there are millions of people who enjoy their nude state and take nude photos of themselves. This is normal and says nothing about the people other than that they enjoy their nude state. Good advice for such people is that they should exercise greater care so that the images don’t end up where they aren’t supposed to be. And that is just all there is to say really.

Having said that, I find that it would be highly inappropriate for the said committee to investigate why Mhlanga had taken nude images of herself in the first place. They could claim to investigate how the picture ended up on her status, but again the events surrounding the saga point to a genuine mistake. If it looks like a dog, barks like a dog, and walks like a dog, then it’s a dog!

Therefore, the mandate of the commission is greatly flawed and can only be motivated by malice. It should be noted also that whatever findings and recommendations they will make have no real value to the teaching profession or any other profession for that matter. For example, supposing they find her guilty of (accidentally) posting her privates on her WhatsApp status (without actual intent by the way), and subsequently take whatever action they see fit, will that deter others from making the same mistake in the future? The answer is an obvious no.

My view is therefore that this commission should be dissolved and the resources that have been allocated to it should be redirected to where they will be better used. And to the overzealous ZRP, leave Mhlanga alone and arrest the people who shared the image instead of because they are the ones guilty of distributing pornographic material. If you can’t provide emotional or psychological support to her at this point, at least have the decency to leave her in peace to reflect on her error without further bother.